Yes it’s back yet again!  Welcome to another episode of Kpopalypse Nugu Alert!  Let’s check out some more k-pop nugus! 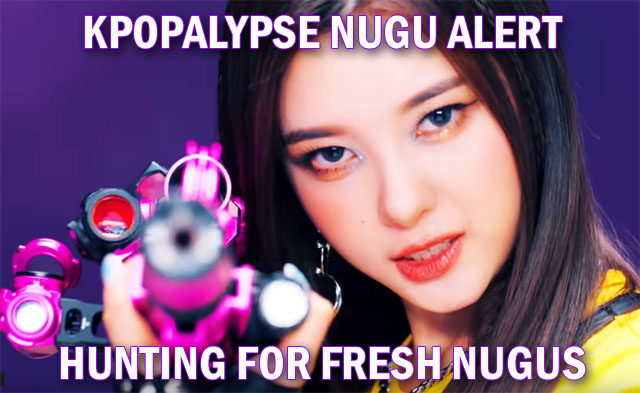 I’ve got a lot of nugus to get through before the end of the year so expect quite a few more of these posts.  This probably sucks for most of my readers because I know many of them don’t even care about nugus and I also know my view count will decrease a lot because of this as it always does when I post new episodes of this series, but tough shit because I’m on a nugu mission.  The nugus will continue until morale improves!

Korean pop has really taken to rap music over the last 30 years for some reason, and they have a way of inserting rap into literally anything that breathes.  Ballads have rap.  Rock songs have rap.  Trot even sometimes has rap.  I’m surprised their politicians don’t rap, or maybe they do, I’ll admit I haven’t checked lately.  So it’s only natural that for every successful rapper there’s a whole forest of nugus trying to gain some sort of market traction.  I see rapping nugus even in my own country, passing me their scratchy mixtapes at parties as if I own a working cassette player, and rapping in the shopping mall, existing in some transient state between internalised superstardom and homelessness.  Let’s throw some Korean rap nugus a bone in the hope that it’ll translate into some kind of good fortune for them, although it probably won’t.

Starting off this episode we have the not very innovatively titled “Nuthang”, who paradoxically has actually been around for a while and has even made it into roundup before.  Anyone collecting all the k-pop songs with the word “vroom” in them might find his song “Vroom” notable for its sheer lack of “vroominess”, and then there’s “Tonight” which is some pretty typical R&B which has some girl in the video hanging off him while he looks oddly depressed for some reason.  However this is a rap post so there’ll be none of that weak shit, “True Independent” is a tough rap song which is all about… well I don’t really know, I guess he’s just trying to say that he’s Nuthang and he’s really independent or something, as if that wasn’t already obvious just from looking at the poverty-level video.  At least he made a solid effort here with the wardrobe, changing into several outfits and even showing more abs than the majority of male idol groups these days.  Given that he’s done literally everything here himself it’s certainly not a bad effort, but the problem with doing 100% of your creative output without a collaborator of any type is that sometimes having that extra person in the studio to filter your ideas through and give you some honest feedback is super helpful.  That backing track was one “you know I love you bro, but that synthesiser line ain’t it, man” away from being listenable.

Notable attribute: Nuthang has more ways of wearing sunglasses without actually looking through the lenses than Jessica Jung

Slim 9lock – Back To Back

I’m always confused when there’s numbers inside artist titles.  It took me ages back in the day to work out that “B2$T” was actually k-pop group Beast finding a clever way to promote their second album and show that they’d (supposedly ahem) made a bit of money, rather than an actual group name change to “bee-two-dollars-tee”, which caused some confusion on my part when I was DJing radio and back-announcing their songs.  So I don’t know if this guy here is supposed to be “Slim Glock” but he got the G upside down like a kindergarten student’s first writing class, or he’s really “slim-nine-lock” who is here to entertain us on his ninth song (which could be true as he does seem to have at least nine songs with videos, including a couple which exceed Nugu Alert viewcount, so he loses some nugu points for this).  Anyway it’s pretty musically awful, although it’s visually at least a little different with Slim Nine Lock finding as many random uses for his paper money as possible.  The bills forming words on the ground are a nice touch, but he’s doing this in the tiniest one-bedroom townhouse possible, which detracts a little from the “stupid poor people, I have more money than you” vibe he’s going for.  Perhaps he should take Ice-T’s advice and go buy some real estate so he can spread out his bills enough to construct a full sentence, but then given that there’s only about eight bars of actual rapping in this song, perhaps forming articulate statements isn’t his strong suit.

Notable attribute: house is basically empty but at least they didn’t forget the hand sanitiser in the kitchen, it’s important to wash your hands after touching all those germy paper bills

Sporting visuals way beyond what I’d expect for something with such a freakishly low view count, Toru’s song comes with an impressive drama video that far exceeds the song’s actual length.  I’m not sure completely about what is actually happening, but there’s lots of Toru being chased by some black-clad people for an unknown reason, perhaps it’s the hip-hop police upset about how his backing track is actually pretty decent so they’ve come to catch him and make him lower the quality so “Happy Society” fits in better with everything else around it in the Korean rap scene these days.  Worry not that you’re living in a parallel universe as this guy sucks normally but at least he had the common sense to put his best foot forward here, and that violin line really makes the track come alive.  Not only that but he’s as sharply dressed as Sandy in “Teen Swag“, and I gave her lots of points for that so it’s only fair that Toru gets them also.  However if you just can’t fucking stand this song or Korean rap guys in general no matter what the context, you still get Toru being hit by a car at the end so it’s true that this video really does have something for everyone.

Notable attribute: picture of snails on the wall from 0:22 possibly symbolises his agency’s promotional team given that nobody has heard of this

Kim Jongho – Do you want to get hit with the hook?

In terms of sheer what-the-fuckery that diehard Kpopalypse Nugu Alert fans crave (yes, both of you), Kim Jongho has it in spades.  He seems to be in the genre of what they call ‘conscious rap’, where the focus is firmly on having song lyrics with some kind of positive social message, although perhaps in this case it should be called ‘unconscious rap’ given that he’s simultaneously threatening to knock you out cold if you don’t follow his vague, non-specific instructions to get your life together somehow.  Listening to Kim Jongho proudly talk about how he’s a polite non-materialistic person who doesn’t gamble, doesn’t swear in his lyrics and wants to feed the hungry people of the world, then switch the topic to how he wants to cave the listener’s face in with his fist, and then immediately swap over again to an R&B style chorus reminiscing about someone’s childhood is certainly jarring and strange.  It’s all delivered with a pretty limp rap style that straddles an uncomfortable line between talking with no specific meter and actual rapping, and yes he has other songs and they’re all just like this.  At least he says “Swag?  Give it to the dog!” which is a cool line, I assume this is a poorly translated way of saying “this rapping doesn’t meet required dog standards”.

Notable attribute: expressive dance break at the end with multiple fades and filters is truly inspired

Nugu Alert rating: off the chart 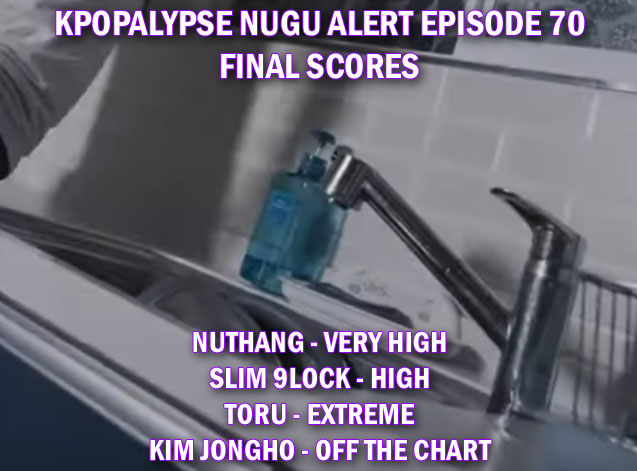 That’s all for this episode!  There’s plenty of nugus left for this year, so Kpopalypse Nugu Alert will return – soon!