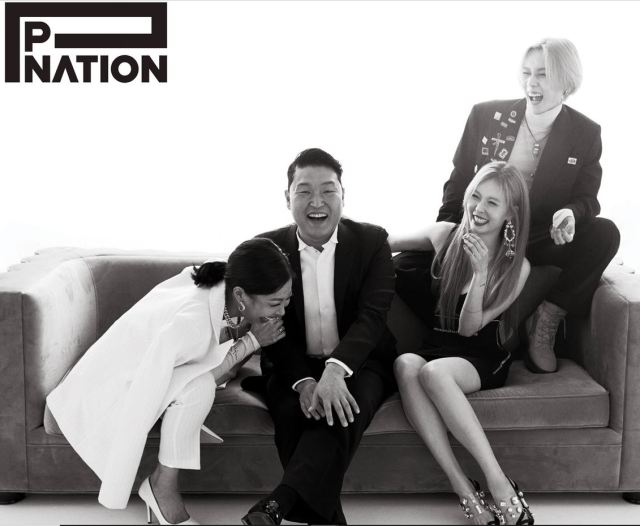 Oh great, it’s EXID “in my area”.  There’s about seven seconds of decent music here in the pre-chorus and the rest is all crap.  At least it’s good to get confirmation that they’re alive, I guess, although if they’re going to keep up with this nonsense let’s just disband them.  Again.

Significantly better than anything else NMIXX have done so far just because it sticks with the one thing throughout it’s running length.  Okay the song isn’t exactly amazing, but hey, you’ve got to crawl before you can walk.

What is it about the dreaded Universe App and completely nauseating ear-grating chorus hooks from hell that seem to go together.  This song definitely did not make me feel like a shark chiki chika chu

It’s pacy and doesn’t do anything mega stupid, that’s half the battle these days.  The girl with the dark pigtails looks like Kim Nayoon a little.  Kim Nayoon is pregnant now by the way, so go here and congratulate her.  EDIT: oh shit she actually had the kid already.  Damn I really should check Instagram more often.

The other song is a bit dull but it’s not too awful.  I’ve heard worse predebut songs.

I’m digging it, it’s neat.  A slightly weak chorus lets it down, but it grooves nicely which makes up.  If this is what they’re coming out with as throwaway “dance practice” stuff, I’m impressed.

The Kill Bill-inspired video is outstanding, and Bibi as usual looks stunning, what a shame that the ace-in-the-hole visuals are completely wasted on some slow, dragging dirge which comes off like a B-tier version of Sam Brown’s “Stop“.

PRSNT is just good and the best thing to ever come out of the ruins of 4Minute.  A little lighter on the vocal processing would have been nice, but that’s about the only thing drastically wrong here.

Cool and unusual sounds but there’s just something missing.  It just needed some more heaviness, or some more something in the mix to tip it over the edge.

CLASS:y – Can I Call It Love

Some rubbish pre-idol era acapaella garbage gets the remake treatment and the team behind CLASS:Y do their best to make something good happen but you can’t make a silk purse out of a pig’s ear.

Okay I think it’s confirmed at this point that fast songs are gradually coming back into fashion, thank fuck for that because it’s been a long six or so years of nothing but slow boring fucking slop from most groups.

Songs with “rock” in the title should be legally required to at least have some actual rock music somewhere in them.  Penalties for non-compliance should be a public flogging at the very least.

What is the point of wearing a thick jumper that is literally 50% holes.  Doesn’t keep you warm, doesn’t show off your body, doesn’t look any good… but I guess if you need to suddenly dive into the water and catch a fish you could probably do it.

Too Autotuned to really have the intended effect, but the golden tint to the lighting is nice, it reminds me of Zico’s golden phone.

SM’s horrid attempt to try and cross aespa over to the art-music snob crowd falls flat on its face because they just try to add too much to the arrangement, too much of the time.  The only good thing about the original was it had a decently punchy riff, with that punchiness diluted and swallowed up with layers of nonsense there’s little reason to care about what’s left.

This week’s Future Idol entry is just like all the others.

I’m always torn with this group because their message is so righteous (even if the delivery is a bit ham-fisted) but their music is always beyond dreadful.  I hope these guys get popular though because with any luck they might get big enough to start attracting the services of someone who can write better songs to go with their ideas.

Freeze frame this at 0:45.  This is it, this is how to use that microphone correctly.  Make sure you congratulate these people, and spread the word.  We can make SM do it right too, one day!

What a waste of good CGI.

YEAHSHINE – Wanna go for a walk

While vertical mobile phone format for a music video should be punishable by jail time, I guess I don’t mind seeing 70% less of these clowns than I normally would have to.

Kim Young Chul – Marc Got It

The point of those machines is you’re supposed to program them to do the work for you, not bash them with your finger all the time like a fuckwit.

Someone explain to me the humour in this, because it seems like they’re joking about something but I can’t figure out what it is, other than “we are saying the world ‘sang’ a lot, oh gosh ho ho how random how zany pass me the broccoli”.  All I know is that the Paradise Diner must be cleaning up with continually renting out the space in front of their establishment.

Just your regular reminder that dolphins are cunty animals that are almost as bad as humans, stan cats instead.

Obze – ANGD: Be that as it may

I love the very relatable moment at 0:35 where she sees the songwriter checking out the performance and drops the mic to go and throw a shoe at him.  Who wouldn’t.

Minimalist but rocking, I like it, it got a lot better than I expected from the first few seconds.

Why do the guitars sound like sandpaper.  I think a boatload of Rocktek distortion pedals all washed up on a beach in Korea somewhere.  Someone help these guys discover decent guitar tone.

Rain Note – Take It All

There other song is better, not just because it’s written better, but because there’s occasional layers of keyboards in there to break up the guitar fizz.  Usually I’m all about cranking guitars to the max but not when the result sounds like skateboarding down a hill with your bare ass hanging out of your pants and touching the ground.

I think this is a bit like bhangra in that you really have to be someone from the country of origin to actually like this kind of music.

When I was shopping for Fender guitars recently I was eyeing off a black and white strat that looked exactly like the one in this video and it was dirt cheap, but I passed on it because I wasn’t sure what condition it was in and I didn’t want to have to pay a premium to have it delivered from Japan.  Looks like this guy bought it instead and it looks pretty beat up so I guess I made the right decision.

Doorlesshouse are pretty good and I was actually going to put them in Nugu Alert recently but they have enough good stuff that I think they can just go in roundup instead fuck it.

Here’s their other good song and this is even better, it has a Cocteau Twins type of phrasing to it that I really enjoy.

I was all ready to be like “Warning sign: swanning around in the green fields like a twit” but then the song wasn’t too bad, even if there’s something awfully weird happening in the bass register.

These guys weren’t the GOAT last week and nothing has changed.

She is making it look easy but I assure you that it is not.  Getting that bass-thump on the guitar body with the palm seamlessly correct, while also doing both melody and harmony without missing ANYTHING significant about the song, and maintaining perfect timing throughout all of it, is truly outstanding work.  This is ten times more impressive than that fat garage-rock dude people linked me five million times this week.

Remember that girl with the incredible acoustic guitar technique that I highlighted a while back, well it turns out that she also plays piano better than you.

One of the songs that definitely popularised “screechy and annoying” among k-pop fans, it’s definitely more of a miss than a hit, yet in retrospect the song seems relatively coherent compared to all the bullshit knock-offs that it inspired from every other girl group straining for the A-list.  I’ll take Red Velvet being annoying over some other group annoyingly copying Red Velvet being annoying.

That’s all for this week!  Kpopalypse roundup returns next week!  In the meantime, this week is the LAST WEEK that the Kpopalypse survey will be open – CLICK HERE to do the survey!