Okay, let’s write this thing.  You know the drill.

I love Asian Junkie oppar with all my heart, yes I do, his articles are very educational and informative, and he even let me write for him as an author for a few years (a fact which he’s probably regretted ever since).  While his analyses of the k-pop world are not always perfect, they are certainly far better than I would expect from a non-music-industry-literate sportball fan, and overall far more insightful and thoughtful than the crud most of the supposed “official news sites” churn out.  It’s a great site that you should visit often and if you felt really bold you could even turn off your adblocker before you do so (if you’re using one, Kpopalypse recommends Ublock Origin for Chrome or Firefox) so he can make a few dollarydoos.  However his site does have a weak point and that’s humour – it’s got to be said that the weird American-style humour on Asian Junkie definitely misses the mark for me, most of the time.  So it was with great pleasure that I noted his article on Osshun Gum, called [insert drum roll here]:

Everything about this article is hilarious, and nothing about it is not hilarious.  From the heading, to the excellently-chosen photo (where he does actually look like he’s puckering up in anticipation of someone else sharting directly onto his lips), to the situation at hand, to the quotes from official sources, to Asian Junkie’s editorialisation, to the comments from his readers, it’s all solid gold baby.  I know what you’re thinking: “you shouldn’t laugh, there’s a victim here…” oh come on, if I was the victim in this scenario I’d probably be laughing harder than anybody.  Imagine going to the police and saying “some C-grade rapper just tried to eat my poop while it was still halfway in my ass” while actually keeping a straight face, it would be literally impossible.  Crimes like this are actually quite common, but I’m sure that they get widely under-reported because if you can’t stop yourself from giggling in the cop shop the boys in blue are obviously going to think that you’re just making shit up (literally) and will show you the door.  I’ve barely been able to stop myself from laughing long enough to post this POSITIVE post for you all, it’s definitely the biggest laugh I’ve gotten from an Asian Junkie article possibly ever, and that includes me laughing heartily at my own republished articles on his site like a goon because I’m an easily amused morally bereft borderline-autistic narcissist egomaniac fuckwit.

Rappers are so full of shit – lying is basically their stock in trade.  Every rapper ever seemingly wants to convince you that:

Of course in reality, we know that the reverse is usually true.  Even the best rappers only tick one or two of these boxes at most.  Your average rapper:

So for Osshun Gum to basically come out via his legal representation to say “yes I’m having mental issues due to being a failure at rap with no career and also I tried to eat poop from a kid’s ass as I wandered the streets nude like that Kony 2012 guy” is a refreshing burst of honest humility from the overly egocentric and megalomaniac rap music world.  Imagine if 2Pac said “I’m not Scarface, I’m just a dancer from Digital Underground with below-average rap skills who got lucky milking a trendy image”, that would never happen.  Honesty just isn’t what the rap world is about, so perhaps Osshun Gum by breaking the mold here represents a force for POSITIVE change.

Did I mention earlier that poo theft is an under-reported crime?  Osshun Gum being caught brown-handed during a mental health episode trying to relocate a turd without consent may help bring more awareness to this issue as well as help expose the link between coprophagia and neuropsychiatric disorders such as dementia and catatonia.  Kpopalypse’s interviewees have spoken out before about how mental health isn’t taken as seriously in South Korea as it should be, so no doubt international k-pop fans will appreciate bringing awareness to this important social issue which is often swept under the cistern, and look upon Osshun Gum with sympathy.

It’s important that people in countries outside of South Korea set an example for the proper caring and treatment of mental health issues, so let’s all think POSITIVE thoughts to help Osshun Gum’s on his mental health journey!

Reason that Kpopalypse feels POSITIVE about Osshun Gum #4 – probably no more shitty rap songs for a while, hey

You could be forgiven for not knowing much about the musical output of Osshun Gum, as even by his own candid admission his career hasn’t been very successful.  Not many of these songs have made it to roundup due to Osshun Gum’s ultra-nugu status plus the fact that I tend to ignore turd-munching slow-death hip-hop-lite, so here’s a little recap that might be helpful.

Here’s the other song he managed to get into roundup with, it’s called “Mountain Climbing”.  When I first saw this video I wondered why there were no mountains but just a CGI hospital, but now I realise he was probably rapping about climbing a mountain of some boy’s fresh turds and ending up in the psych ward.

Another song called “PRDS” which really isn’t very good either, and I don’t know what PRDS stands for, perhaps it’s the “Poo Robbery Dementia Shuffle”.

This track is called “Life’s A Dream” and it’s one of his worst songs, like most rappers he really is at his absolute lowest musical point when he’s trying to sing, and he does this on quite a lot of his songs.  He actually sounds like he still has some of the poo in his mouth.

Let’s throw in a track from the TV competition show High School Rapper in here because why not.  Kids, stay in school.

Osshun Gum seems to specialise in these slow, boring dirges, plus dressing like the condom his father should have thought about using.  Has he considered that perking up his sound a little might be the way to go for some increased popularity in the future?  A silly question, I know.

Here’s another clip of that Jvcki Wai song from before because I like watching Jvcki Wai and because Osshun Gum is on this track it’s relevant to put it here, so I will.  For best results just stop watching after the first minute or so and go on about your day.

Gosh, mental issues?  You don’t say.  Never would have picked it.

You might be noticing a common thread here with all of these songs, and that’s that they all suck.  So it’s thoughtful of him that he’s probably going to give the music thing a bit of a rest so he can take care of his legal matters for a while.  He promises to return and “help society” with his music if given the chance however so I can only presume that means he’s going to do a heavy metal project soon, I expect it fondly.  Perhaps he will learn the bass and become the new bass player for Megadeth, or Lovebites.

If the degree of which something is hip-hop can be measured by cleanliness, or more specifically lack thereof, it would be fair to say that “attempting to extract poop from the butthole of a minor for the purpose of human consumption” would reside on a significantly higher tier than “not taking a shower before you go to school”.  By these standards it’s hard to think of anyone right now who embodies the “charm of hip hop” more than Osshun Gum except maybe GG Allin, and he’s not a rapper plus has been dead for a few decades now so that doesn’t leave Osshun Gum a whole lot of competition.  He’s keeping it raw.  Save hip hop for us, Osshun Gum.  Or don’t.  But seriously, what the fuck are you doing with your life dude.  Turds don’t taste that good, man – certainly not a taste worth going to jail for.  Don’t ask me how I know this, you just gotta trust me on this one.  Wait, no you can’t have Little PSY’s address, hey where are you going… shit, COME BACK… hey, does anyone know the number of this guy’s ward? 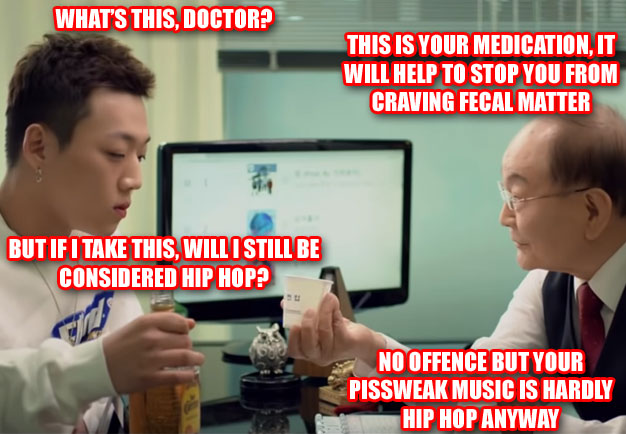