Kpopalypse Fashion Class will continue its run of looking at individual idols to see what we can learn about the most important aspect of all fashion in k-pop, which is boob presentation.  For this episode I have selected Girls’ Generation’s Taeyeon, who is definitely one of the most challenging subjects in the important field of boobs. This post will be heavy on science as we tackle the important aspects of Taeyeon boob.

The first task is to ascertain what type of Taeyeon boob volume we are dealing with.  Those with long memories may remember my big boobs in k-pop guide part 3 where I shot particles from the Large Hardon Collider into Taeyeon’s cleavage during a performance of “I Got A Boy” to try and discover the secrets of Taeyeon boob volume, only for the molecules to rebound and illuminate the bulging package behind JYP’s plastic pants.  However boob technology has advanced considerably since when I wrote that post, so let’s re-analyse that incident first.

Not long after I posted my boobs list featuring Taeyeon, an intrepid Asian Junkie investigator decided to take a closer look.  Here’s what they concluded:

The author believed that a silicone pad was involved, and that this pad was visible under the garment as shown above.  In their words: “While these silicone pads for bras usually go inside the bras, it appears that the one she was wearing that day didn’t have the compartment to do so.”  Is this observation correct?  Well, this theory has a problem – if a silicone pad was being used, there wouldn’t be a visible shadow between the boob and the pad, because the bra would keep everything in place.  You can see an example of a silicone pad fitting here:

When a silicone pad is applied to a boob, via an undergarment holding it there, there’s simply no room for a shadow to be cast between them, the undergarment keeps everything contained.  On the other hand, if the argument is that there was “no compartment” (i.e no undergarment), then they must be talking about a self-adhesive pad that sticks to the boob.  Now there’s no way in hell that a k-pop wardrobe assistant would take a chance with no underwear and a self-adhesive pad for a fast physical dance routine like the one for “I Got A Boy”, but even assuming that they did, the pad would be adhering directly to Taeyeon’s boob flesh, therefore once again you wouldn’t see any shadow at all between the boob and the pad.  But we know there’s an undergarment there anyway, because… we can see it.

Let’s look more at the actual outfit in question:

As you can see, there’s not a lot of wiggle room and Taeyeon has to bend very far forward to generate the screencapped view.  A more likely explanation is that the part marked “padding” in the diagram is actually the upper end of Taeyeon’s abdomen, which makes much more sense as something that a boob would cast a shadow on top of, and we can be certain of this as the shape of the lighter area flexes outward in correspondence with Taeyeon’s boob position, as her boob moves, thus moving the shadow underneath it.  Note that all of this doesn’t mean Taeyeon isn’t also padding, just that if she is, we can’t see the pads.

Now the purpose of this examination is not blame the investigator for getting it wrong, as like all Asian Junkie authors they were no doubt being paid in “exposure” for their hard work, so it makes sense that they came up with a thesis to match the quality of their pay scale.  However it’s important ground to cover, because we need to know what type of breasts we are really looking at, so we can then determine the most effective methods of enhancement.  My conclusion based on the above is that Taeyeon’s breasts are very much “side set” or in Kpopalypse terms, Taeyeon as the leader of the “far eyes” also has “far breasts”.  This just means that her breasts are further to the side and that there’s quite a bit of room in between them (indeed it is this unexpected amount of room which has probably confused the Asian Junkie investigator).

Now that we have ascertained the type of boob flesh present, we can look at how Taeyeon’s fashion choices have evolved since Girls’ Generation’s peak popularity period.  We will see examples of Taeyeon boob presentation that may be helpful for readers with side-set breasts searching for that perfect boob-enhancing look, or for others to appreciate such.

“INVU” is the most recent Taeyeon video appearance at the time of writing.

The highlight is definitely the above outfit, where the side-set boobs are enhanced with a clingy outfit that also has a middle-set strap that helps fill up some of the space in between.  The singular strap “draws a line” between the breasts, focusing attention on the middle and not the sides, and since breasts themselves also draw attention, the effect is to more evenly distribute the attention.

We can mimic this optical illusion with a simple diagram:

However by stacking the images vertically and drawing a reference line, we can see that the circles are the same distance apart in both diagrams.

We can see how this applies to Taeyeon.  Due to the angle of this closer image of the same outfit, you can more prominently see the shadow under the middle of the garment.  Cleavage can be difficult to generate for side-set boobs even with substantial padding, but in the absence of an outfit that generates cleavage, any clothing feature that can increase interest in the same area can help balance the visual impression.  If Taeyeon had a lower-cut top here, she would look less busty, as the space between her boobs would look bigger and thus make her boobs look smaller, but adding a little mystery around the middle of her chest, plus extra detail to catch the eye, has a big impact here.

Let’s look at some more outfits from this video. 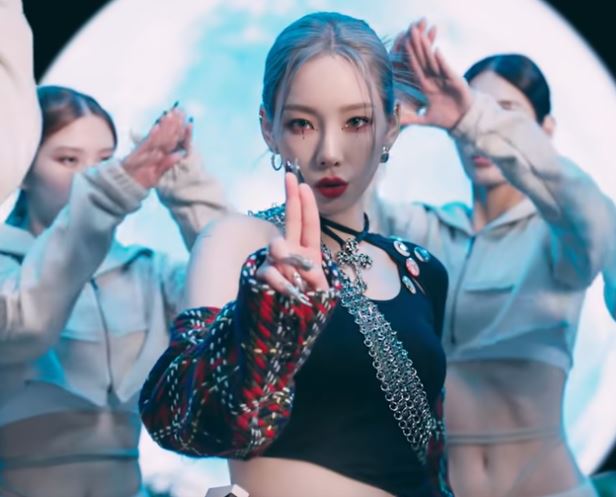 Note the chunky jewelry striping diagonally down the middle of the outfit, on much the same angle as the strap from previously.  If you have a big space in that region a great strategy for enhancement, and one that requires no additional skin exposure, is to fill it up with something that draws attention.

Observe how the outfit is tight at the collar and then fans out, drawing attention once again to the center with lots of detail, and making Taeyeon’s boobs feel more central.

Of course a corset-like garment will make literally anybody look busty, but notice how there’s still quite a bit of space here between the boobs even with a tight push-up corset plus extra undergarments.  However an implied line has been drawn from Taeyeon’s chin paint, to her necklace with the chunky center piece, to the loop at the top of her pseudo-corset, to the boning on her upper abdomen – just follow Taeyeon’s index finger.  If there’s another person wearing a corset at the same party and she’s bustier than you, emphasise the center.

“Can’t Control Myself” is another recent Taeyeon music video appearance, and another example of Taeyeon dressing well.

Taeyeon can’t really get substantial cleavage happening even with a dress designed for cleavage, due to her boob size and positioning it’s just “hello ribcage” once again.  However even if you don’t have cleavage you can still look booby in a dress like this.  The neckline helps, by cutting off the boob visual just at the point her boobs start to separate, and the jewelry helps a little more by adding some extra eye-catching detail in the center region.

The more flesh Taeyeon shows in the video, the fatter and more detailed the neckwear becomes to compensate, to bolster the impression of curves.  Here Taeyeon’s 57 necklaces of boob-enhancing are working together to help provide plenty of central visual enhancement, as well as de-emphasise the fact that Taeyeon is wearing a bra under her nightgown.

There’s plenty of other examples across Taeyeon appearances throughout the entire latter period of her career, and now that you know what to look for, finding them will be easy.  Probably the most striking example of this type of effect is in “Four Seasons”:

No necklace here but instead some weird fishnet thing has been stuffed into the space between her boobs to fill up the gap, also guaranteeing that you won’t stop looking at that area, wondering what mysteries lie within (not JYP’s plastic pants, we hope).  Of course such a dress isn’t something you’d normally wear out, but you don’t have to get that complex with it, or wear formal or fancy garments to get this look. 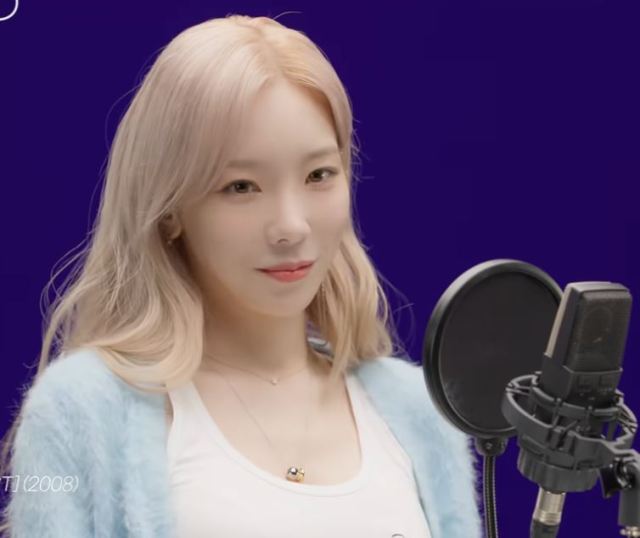 In the above live performance video Taeyeon’s wearing casual clothes, using pretty constrictive underwear for extra volume, and has also added the necklace in again.  Even with obviously at least some push-up effect from the underwear, there’s no actual cleavage, but just a small gap between the front of her white top and her skin, with the necklace bauble sitting right inside that gap, actually behind the top.  Note the lighting is also helping a lot here, with a pretty harsh light directed above Taeyeon’s head and shining diagonally downward to get that Sunny-tier shadow under her boobs happening.

So to summarise, if you have Taeyeon’s “far boob” appeal and still want to look as busty as possible:

That’s all for this post!  Kpopalypse Fashion Class will return!