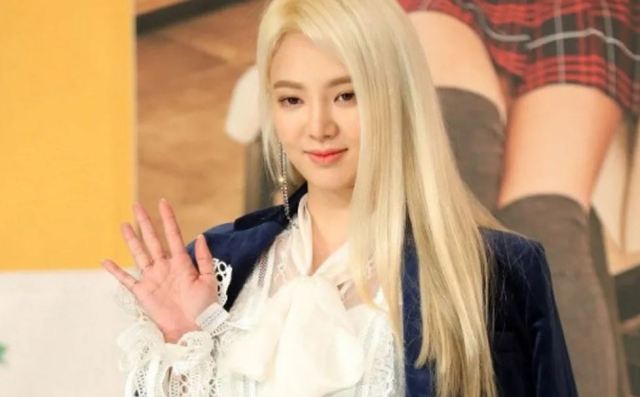 Apparently noticing Hyoyeon’s tan is racist or something, I guess tan is considered “natural blackface” now. This is good, because if tans are racist, that means outdoor sports must also be racist. Of course, indoor sports is probably racist too (because the racist white-skinned people are too scared to go outside and darken their skin colour) so let’s just abolish all sports forever in the name of stamping out racism, just to be on the safe side.  If just one person is saved from racist taunting due to the total global abolition of sport, it was worth it.

Apink deliver another strange-as-shit banger.  I predict this will be a grower for many of you, and I also predict this song topping at least one very important list.

Taeyeon also has a pretty good song this week, it’s been a while since she’s had something that… oh sorry I forgot what I was going to write about the music so let’s talk about Taeyeon’s boob presentation which is absolutely on fire in this video.  So many outstanding moments here to analyse deeply, make sure you download this video quickly before SM change their minds.

Here’s how to do the BTS-style upbeat disco trend correctly, with a song that actually has some meat to it.  I’m fine with Gfriend disbanding if we get a mentally healthier 3friend in return and similar song quality, even if it’s not quite the typical “Gfriend sound”.  3friend also looking the best they ever have, just quietly.  Or maybe not so quietly.

Slightly better than Dreamcatcher’s excellent original just because it benefits from the extra rough edges that a bona-fide rock production provides, but it also feels like a lost opportunity to do something genuinely different.  It would be good to see Rolling Quartz go this heavy (or heavier) on one of their own songs.

Well I guess you can’t sing “kiss the goat” on a Korean live stage without upsetting conservative censorship-friendly types, so “ice on fire” will have to do.

A ballad in double-time is better than an actual ballad I suppose.

Who decided to get the “brass” patch from their cheap Casio keyboard and record the riff that drives the entire song on it?  You could make this song at home for $50 and still have enough change to reapply that streak of bleach into that guy’s long hair.

Such a great looking video that I spent the whole running length wondering why there are planets everywhere and forgot to listen to the song.  So then I listened again and kept wondering why the dark haired girls had elf ears and got distracted again.  Somebody tell me what this sounds like.

I guess it’s as lame and generic as I’d expect from a group called “Trendz”.

Can’t children just be children?  There’s time to be a k-pop later in life surely.  At least the clothing is age-appropriate this time.

Don’t get excited, it’s not AOA but AQA.  Mind you there’s not much fear of getting excited once you hear it.

I’m not sure which one of the 57 people involved in this has that weird marble-mouthed voice, but it probably doesn’t matter as this is club-music-by-numbers purely designed as window dressing so you can stare at DJ Soda in various outfits a bit.

Korea’s Nicolas Cage flexes his acting skills in this drama MV and the results have a real “not the bees!” feel to them.

The song isn’t bad with a semi-decent synth riff driving it, but I’m more concerned about that YouTube channel name.  Playing this video over and over on YouTube probably installs a cryptominer on your device.

Ha Sungwoon – Can’t Live Without You

With Me – I want you to come slowly

Another devastatingly bad release from that “Future Idol” company that spits out one nugu girl group per month.  Always worth watching for the cringe videos.

When they “green” everything out, you know that they’ve seen “It G Ma” collectively at least 100 times and you’re in for a rough ride musically.

I bet she thought he was bullshitting when he said “can you hug me for a music video” so it’s nice to know that wasn’t just a pickup line.

Guitar pop can be bland too, even when there’s some distortion and fast beats involved.  There’s far too much of that annoying “indie” ambience washing out everything for me to get excited.

Sonic Stones – The Beginning of the End

Stick with it – it gets good, and rocks out in ways that most Korean rock doesn’t dare to.

The sounds here aren’t too bad, the song could have been good if it wasn’t just the same two chords all the way through.

I volunteer to be in these folks’ next music video to make sure that all the food they cook isn’t wasted.

This is terrible also.  Blues influences don’t belong in trot, and when they mix the result is always musical disaster.

The weird David Lynch style presentation shows a lot of promise, but the atmosphere isn’t maintained – once the music starts there’s nothing to care about.

I guess the appeal must be in the lyrics, because I can’t understand why anyone would like anything else about this.

Siha – Sorry for not being nice to you

Don’t feel sorry, Siha.  You don’t have to be nice to everyone.  It’s okay to sometimes be an asshole to others, as long as they deserve it.  That’s why it’s always good to keep “problematic words” in your vocabulary.  Yeah, it’s true that you generally shouldn’t call people those things, but what if you meet someone who totally deserves it, AND you know that particular word will really upset them a whole lot?  Might as well let them have it with both barrels, fuck it.

And here’s this week’s mrds entry.  Wouldn’t want to exclude anyone, we’re all about inclusivity here at kpopalypse dot com.

BALLADS ARE BAD FOR YOUR HEALTH

I’m probably going to get cancelled for the 58th time in my writing career for this but sometimes the tough questions need to be asked – did Huh Gak put on a ton of weight, or was it just someone else in his videos the whole time until now?  If you’re looking for a reason to avoid k-pop ballads, clearly the sedentary lifestyle that they promote leads to weight gain.  Vocal improvisations might look like they take great effort, but clearly they don’t burn too many calories.  Let’s all quit ballads for health improvement!

As a confirmed chubby-chaser I’m obviously not one for body-shaming, and these women look great to me – not that it matters, they can look however they damn please.  However no medical practitioner is going to tell you that it’s a bad idea to quit singing ballads if the result of doing so is a healthier physique and a longer lifespan.

While I’m enjoying seeing some larger people in k-pop this week, as we all know that Korea is way too obsessed with beauty standards and really needs to loosen up a little with being more accepting of different body types, these musicians really shouldn’t neglect the health benefits of stepping up the pace of their music a little.  There’s only about a dozen fat dudes in the entire heavy metal scene worldwide, it’s obvious which genre promotes the healthier lifestyle.

The girl here is cute actually, very mrs.  I take it all back.  I’m sorry for being such a cunt.  More ballads please.

Being an independent artist in Korea really is hard.  Support this group so they can afford decent keyboard stands and don’t have to repurpose the furniture.

This impoverished dude has to put his keyboard thing on the damn table.  We need to help these people, someone start a GoFundMe.

This isn’t really a proper keyboard stand either but more of a trolley thing that’s better suited for a laptop.  If she hits the keys hard at the extreme treble or bass end of the register the keyboard is going to come flying right the fuck off, and she might too, because this song is a lot more rocking than the others.  Now that’s not very OH&S compliant, let’s get her a proper keyboard stand.

Viviz Eunha, a girl with a rare disease who made a debut against all odds

This quick history on Eunha is pretty cool and gets to the point without dragging out the length like so many YouTubers do, did you know Eunha had alphabetitis when she was young, I certainly didn’t.  Glad she made it through just so Umji has some competition to keep her visual game sharp.

What do native Americans really think about cultural appropriation in k-pop?

tl;dw: they mostly don’t even think about this shit at all, until some k-pop fan turns up and starts asking a bunch of amateurish leading questions that would never pass muster in a professional interview context, no surprise there.  They do think about Blockberry cramming Olivia Hye into another tight shirt though.  “Actually to tell you the truth, I kind of like it.”  I bet he does, he’s only human.  Hi to my native American readers, if you’re visiting for the boobs posts, sidebar is on the right.

Enjoy Yoyomi singing a song while wearing the type of clothes that only Yoyomi can wear.

That’s all for this week – more Kpopalypse roundup next week!