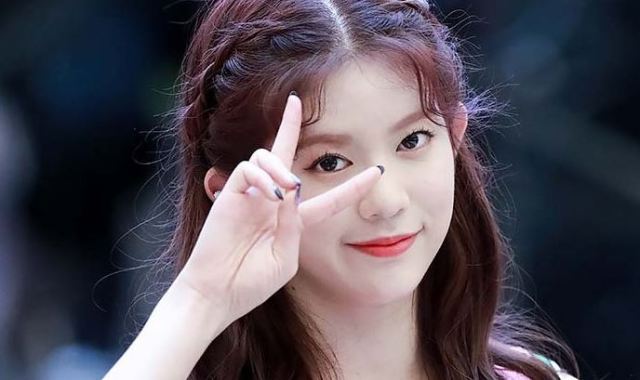 Victory indeed for ex-Momoland’s Daisy as she finally gets paid, earning more in one court case than probably all of AOA, Fiestar, Stellar, Dal Shabet and Nine Muses put together.

Aespa start off with a fantastic verse and then shit the bed with one of the worst choruses I’ve ever heard.  For those of you who like to try and predict my end-of year lists, I legitimately have no fucking idea where to even put this.

I guess Aespa’s trainwreck music is better than just being bland I guess?  No amount of badly-applied facial scars and tattoos can make me interested here.

A pretty obvious copy of Jackson Five’s “I Want You Back“, as if anyone in 2021 really felt that a sanitised version of that song is what we needed.  I guess the fans this is aimed at won’t care.

Golden Child’s songwriters don’t have a clue what to do with their singers, but they at least get the backing track right.

I think Cravity have really missed their calling as interior decorators.

Okay so Luna looks stupid here and the concept is a bit cringe but that killer chorus makes all the other missteps easy to forgive.

I guess this is the girl who was carrying IZ*ONE on her shoulders all those years because she’s the only one actually getting work even though two weeks ago I didn’t even know who she was.

I’m not drunk enough for this.

Some nice backing melodies hang everything together nicely, and the result sounds like a reggae’d up “Likey“.  Now someone get them something proper to wear.

Some cool sonic choices here but once you get past them there’s not much of an actual song.

Isn’t “Gaia” meant to be the goddess of the earth or something?  I feel like this maddeningly weird shouty yoloturd with the pointless extended drama epilogue is not very environment.

Why does he need so many lightbulbs.  This is also not very environment.  It’s earth day or some bullshit soon, does it really take this many lightbulbs to be a k-pop?

Actually rocks a little bit harder than I expected, but the vocals are too loud and it dulls the impact.

“Vibe” is a really misused word these days, people use it to describe literally anything, it’s as lazy a word as “trope”.  Both words just mean absolutely nothing when you break it down, you can use the word “thing” instead of either of them in any sentence when they appear and as a result the sentence will actually make more sense, not less.  Anyway whatever, this tropey, vibey thing didn’t interest me.

I really don’t want to see this guy developing his molka collection.  Any male k-pop artist doing a “darkroom concept” in 2021 needs to reflect.

Blitzers – Will Make a Mistake

The mistake here was not giving the guitars enough interesting things to do.  It’s good to have them of course but just grinding out that one bluesy lick isn’t enough.

Just B – Get Away

Okay so I don’t expect mega budgets or anything but could have have gone with anything else besides “a bunch of guys dancing in a light grey room”?  Given how riff-driven and heavy we’re getting here I’m not sure that it works.

Even the usual nugu stone building is a better choice.

This was sent to me for roundup last week but I left it out because it was too boring, so it got submitted again.  Covering it now so I don’t have to listen to this boring bullshit a third time next week.

Another song which would have sounded so much better with the vocals about 5 dB quieter.

Oh no the MBTI cancer that k-pop is weirdly obsessed with even though it was thoroughly debunked about 40 years ago, has finally made its way into nugu song titles.  I guess some people just really like eating SHIT.

There’s a horse in this for like two seconds, for those readers who cares about horse content, and that’s the only reason why this song made it into roundup at all.

I always used to look at paisley-pattern Telecasters and ask myself “I get that it takes a lot of craft skills to make that, but who in the fuck would buy that shit”, now I know.

I feel like every time I see him Gaeko is doing his very best to make people forget that he was a hip-hop one day.

That’s a very good A minor chord at 1:54 including hooking the thumb over the top to mute the top string, a technique frowned on in teaching material but actually very effective in practice, Jimi Hendrix did it often.  I know that’s not really relevant to anything but I’m trying to think of nice things to say about this so I don’t have to talk about the music because Choi Yu Ree is actually kinda cute and what if I meet her one day and she brings up this review.

It doesn’t matter how many black clothes you wear, unfortunately I can still see you.

Fantastic guitar textures here, but the impact is seriously deadened by a vocalist who is mumbling and crooning when he should be screaming his tits off.

SBGB – Shape of the Moon

Look at the two girls and how they just blend into the surroundings, like they’re in active camouflage that has transformed them to mix in with the granny-flat surrounds.  That’s this song all over.

A reasonable groove-metal type of thing but no band ever doing this style will beat The Mark Of Cain so just stop it.

I’m not really into this either, it could have been good with better writing, but it doesn’t have it, so it isn’t.

I think this is supposed to be a “sexy concept” but it made me want to cut my dick off and join a monastery.

Some songs escape a roundup roasting because they have like two views and they suck so trashing them feels too much like punching down, so it’s a pleasure when a song by some kind of popular guy I’ve never heard of is trash, because I can tell you that it’s music for assholes without feeling like I destroyed their one shot at a career.

This group are never going to be any good, are they.

My cat just came into the room, I loaded up this video and she went straight back out again.  I probably won’t see her for another five hours.

Fuck, Kylie has sure gotten boring.  This is hardly the Locomotion.

When I saw him with that gun I was like “do it”, just because whatever his plans for it are, you know they’re going to be more interesting than the music.

Rohann had a great song last week but this one sucks.  I don’t understand Korean rappers, for most of them good music is like a shirt they can choose to wear, or not.  Rappers in any other country would either do this sort of crap always, or never.

There’s a joke here about this song and the guy’s name and the colour of shit but it’s not quite coming together in my head, so let’s just move on to the next crap.

At night I can’t sleep because I’m tired of reviewing shit songs.  I deleted way over 50% of submissions this week, and I still couldn’t get this post done on schedule.

Dynamic Duo will really do anything for a dollar these days.

Nenne Ichika has ruined these type of circle-specs for all Korean balladeers.  These music video makers are out here going for a bookish, introverted, thoughtful romantic vibe and all I can think about is how those huge lenses make great eye shields.

Yes, he’s back!  The OG of the k-pop-invading westerner trend, long before Kaachi, EXP Edition, Lana or even Oli London (who didn’t even know who he was, tsk tsk), he is no longer “Chad Past“.  You know he’s gots bags of money already and is just in the game at this point to make enough Korean connections to score a future wife someday, but he has so much earnest charm and fearless cringe power that it’s impossible to dislike him.  Yeah sure the song is kinda crappy throwaway R&B trash, but it’s no worse than half of the rest of what’s here.  I hope he succeeds at whatever he does in life.

Now that this show has some original songs, I can start giving a fuck about more than the intro logo.  Unicorn are unfortunately named after a long-defunct failed k-pop group of the same name, but their early Apink sound isn’t too disagreeable with a quality chorus that takes some of the sting out of Gfriend calling it quits.

Pop! Corn’s song is even better.  The chorus is just a little harder to listen to than I’d like, but this is more the fault of the stupid decision to have all the girls sing the main melody at once, rather than anything to do with how they wrote the actual music.  I’m sure a studio version would be easier on the ears.

Medusa’s song isn’t really all that great, although the group has Fu Yaning in it so I have to stan.  It’s excellent how they allowed her to fuck up the high note and left that in unedited, that’ll just help her piss off k-pop fans even more, which is what we want.  Suffer!

This other song sucks donkey dick, flat out.

One Night In Bangkok – Cover by Yoyomi

If I had to watch Cringe Future and his abs as he tries his luck at forming a bond with yet another Korean co-singer, you have to put up with Yoyomi’s super-embarrassing wide-eyed take on Murray Head’s “One Night In Bangkok”.  Enjoy – or not.

That’s all for this week!  More roundup next week – and don’t forget that the Kpopalypse 2021 survey of caonima action is still live, there’s only a few days left, so get on it by CLICKING HERE!  Kpopalypse will return!