Yes it’s another episode of Kpopalypse Nugu Alert, the series where the nugu fun never ends!  Let’s look at some more nugus!

This episode of Kpopalypse Nugu Alert is all about body shaming in k-pop videos, something which is close to my heart as a chubby-chaser as it always seems to be the performers that I like the most who are copping the most shame.  To give a quick overview before we begin looking at nugu videos, there’s basically two types of body-shaming videos in k-pop.  The first one is the type where the performers are overweight and this is drawn attention to, because having performers be overweight is oh so very unusual and notable so it has to be highlighted with big neon signs and flashing lights by these k-pop company pricks because we can’t just leave fat people alone and let them be fat, oh no.

Piggy Dolls were a good example of this type of group (at least in the beginning of their careers), and it’s easy to pass their message off as “body positivity” but it really is the absolute reverse, because in a truly body-positive society their size wouldn’t even raise a comment.  No, the people making this stuff want you to know that the fact the girls are a bit overweight is a very big deal, not to mention a massive marketing risk, that’s why they’re forced to sing and be in videos about how horribly superficial society is, because in the eyes of the people pulling the strings, why would a fat person even care about anything else but societal acceptance?  Isn’t validation from the hive-mind the most important thing in life, aren’t they just tormented by their ostracision?  What, there are people who are both outcasts and happy?  In the eyes of the k-pop industry this is an impossibility.

You don’t even have to be medically fat to be lumbered with a “fat theme” for your entire (short) k-pop career, just having a bit of chubbiness in your face is enough to get stuck with the “fat idol” tag even if you’re objectively not fat at all.  (Note the artist here is “FatCat” and has been mislabelled “The Fat Cats” because chubbiness has such a stigma that even the artist’s own label didn’t know who they were or give a shit about them when the reuploaded this.)  So of course again this poor girl has to sing about how beauty is on the inside and blah blah, the implication being that nobody could possibly like her for her outer appearance because she’s so “incredibly fat” or whatever the weird people who thought up this concept were thinking.

The second type of fat-shaming video is the one where the performer is not shamed, but is instead held up as the paragon of fat-shedding slim virtue, and contrasted to an actor or actress in the video who is then designated the bearer of fat-shame.  The performer is usually cast as some kind of inspiring influence, as if the genetic lottery isn’t a factor and anybody can look like Hyomin as long as they do enough hula hoops per day.  Now I’m as much of an advocate for going to the gym as anyone and I’m not going to tell you that exercise won’t help your life because it probably will, but I would probably eat glazed doughnuts by the truckload if they made me hallucinate and see Hyomin gyrating on a pole, so who am I to judge anybody.

However this raises the question – what’s it like for nugus?  Do they have the same pressures as more established artists, or artists from bigger agencies?  Do the same video and marketing archetypes appear?  Let’s take a look!

Leepani isn’t actually all that nugu and is in fact a k-pop veteran from the 2000s but she still gets fuck all views these days and probably only two of you reading this know her so her terrible song can go in here anyway.  Leepani’s video is very much in the “Nice Body” style, with Leepani appearing as a guide or personal trainer for two fat people and showing them their measurements, shaming them immediately into stopping what they’re doing and to go and dance on the set of her video or something.  It seems a little bit weird especially in the case of the female who is actually already in the gym, she could have just told her to start pedaling the bike some more, and how is that guy going to afford his gym membership if he’s not at work, I doubt bouncing around on Leepani’s mini-trampoline is enough to pay the bills.  Honestly despite the low quality of the music and the generally odious social messaging it’s still worth a watch just for Leepani’s incredible fried-chicken-kicking skills.

Isn’t it so fucking sad that a girl who is within a healthy weight range and honestly quite attractive like a thiccer Hope Sandoval has to go by the stage name of “Piggy”, she couldn’t just have a normal stage name could she – no, of course not, because she’s maybe 2kg over the BMI at most she gets the “fat singer” brand, isn’t that just wonderful.  However that’s not even the saddest thing about this.  No, the real kicker here is the entire concept of “brunch on Monday”, as explained by the distributor’s press blurb:

Somehow in the music business we’ve gone from “we want to make our artists rich and famous” down to “we just want to be able to allow our singers to make a living from music and quit their day jobs”, and then all the way down to “we want to be able to make enough money to be able to afford to pay our artists the equivalent of half a meal once per week”.  Fuck Spotify and fuck fat shaming, this girl needs a food support program, plus your support in general, the song isn’t too bad actually.

Notable attribute: the cameraperson even thinks she’s too fat and seems awfully keen on focusing on the boring cityscape in the background instead of zooming up and down her body like every cameraperson does to every other k-pop idol ever since the dawn of time, what an insult, I’m going to go to the top of “Sweet Home 401” and throw rocks at that prick the next time he shoots a video up there

I really really hope that they’re called “BeaverTown” because they spent a crazy summer in a town in Canada where one night some cute beavers built a dam across the local river and the band guys woke up in their share house by the creek the next morning and the entire street was flooded, and not because there’s a couple guys in this band who are kind of fat and wear clothes in drab earthy colours and so they cut a sort of beaver-like profile.  Because that second possibility is just too sad to contemplate.  Anyway once again the song is pretty good here with some great musicianship too, certainly better than Leepani’s trash so maybe give these talented boys a follow and a Korean Indie interview as soon as those guys have finished covering the Gfriend split.

Notable attribute: no tape over the instrument brand names, these guys are under no illusions about attracting big sponsors, mind you I think they’re in for a decent shot in the casual menswear category so they shouldn’t undersell themselves 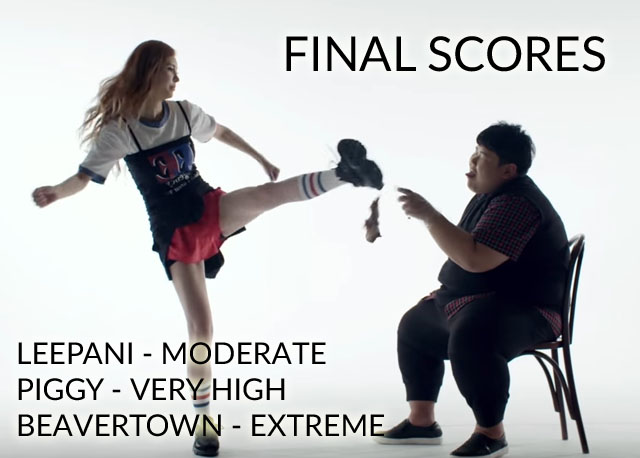 That’s all for this episode!  Know that more Kpopalypse Nugu Alert is coming very soon!