I didn’t know what an NFT was yesterday, and today I wake up and it’s suddenly all that the k-pop Internets can talk about.  As it’s the duty of Kpopalypse to always be current with the latest trends and fads, it’s time to reveal Kpopalypse’s NFT offering!

So I’ve been reading up on this NFT thing, and trying to learn all I can, out of sheer duty to report accurately to the kpoposphere about these important matters.  Here’s what I’ve learned so far.

NFT apparently means “non fungible token”.  “Fungible” means “like the fungus that grows between k-pop trainee’s toes from being trapped in shoes for 18 hours per day while they learn some random k-pop dance over and over just for fans to criticise them for being lazy anyway”, so in other words, very common and not unique.  So they could have just said “unique token” instead of “NFT” but “unique token” actually makes sense and is easily understood by the unwashed masses and therefore not as buzzwordy, so it’s no good for describing the latest flashy tech trend that you want inquiring minds to be excited about.  The content of the token can be anything, but it’s actually the link itself that is the valuable thing that gets traded, which doesn’t make a whole lot of sense to me but people with more money than me told me this so it must be true.

Links for NFTs are powered by Etherium which is a boring crypto nerdcoin that does not mrds.  Mining Etherium uses a lot of energy so people say it’s not very environment, but that depends on how you’re generating the energy.  If we are making energy from renewable resources such as a turbine powered by Wonho’s lower body workout, then NFTs could be made much more environment than they currently are.  Let’s look at Wonho’s lower body workout now to study energy consumption and efficiency.

A lot of k-pop fans are upset about the recent nerdcoin NFT thing by A.C.E, because they worry that it’s not very environment.  However A.C.E also seem to posses the natural resources that could generate nerdcoin energy more efficiently.  Let’s examine these natural resources closely to determine their energy potential.

So while NFTs definitely do have their issues, there are also potential solutions on the horizon.  However until these new solutions are implemented, we can safely say that NFTs are not very environment.  Wouldn’t it be good if there was an NFT that you could purchase, that is very environment?  Now there is, with the Kpopalypse NFT offering!

The Kpopalypse non-fungible token consists of a link to the following cat images.  These images have been selected for maximum rarity and thus maximum value to you, the NFT holder.

Here is a picture of my cat with a very rare k-pop album, Spica’s first album reissue “Painkiller”, which contains the songs “Painkiller“, “Russian Roulette“, and “Doggedly“.  Spica weren’t a very popular group when they were around, so not many people have this Spica album, and even fewer people have my cat. 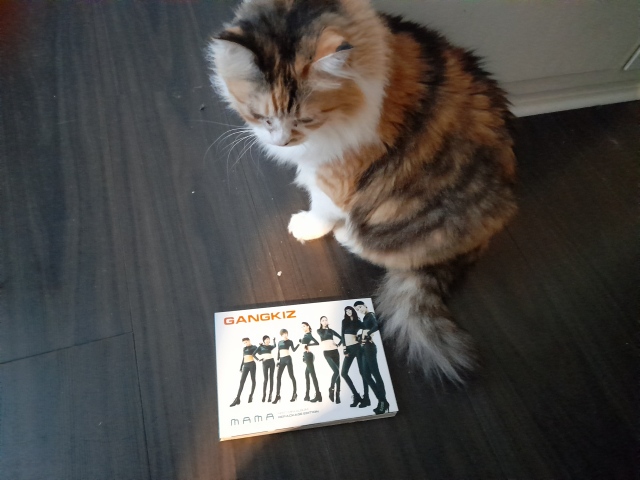 Here is my cat again, with an even more rare k-pop album, Gangkiz’ “Mama” reissue, containing the tracks “Mama” and “Honey Honey“.  Despite having one of the most expensive music videos in the history of k-pop and benefiting from a huge promotional push due to their association with T-ara, Gangkiz never even lasted long enough to make a single comeback and disbanded almost immediately after debuting, with only approximately 1000 copies of this reissue album available worldwide.

Maximum album rarity means maximum token value, so here is my cat again with yet another rare k-pop album, Piggy Dolls’ “Hakuna Matata”, featuring the tracks “Know Her” and “Trend“.  Despite much delight from international k-pop fans when they debuted due to the group’s “body positive” image and message, nobody actually put their money where their mouth was and bought their fucking album because k-pop fans are hypocrites who pretend to be “woke” but don’t walk the talk, ensuring that this group’s fortunes sunk like a plus-size stone.  Of course, unlike most k-pop fans who like to trend hashtags and cancel people but fall short of doing anything material, Kpopalypse actually ponied up the dollars for this ultra-rare album. 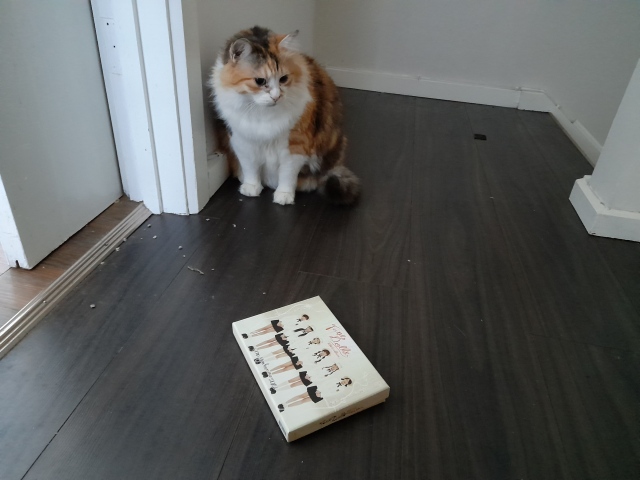 Here’s my cat again, this time with the album from F-ve Dolls “Can You Love Me”, featuring the tracks “Can You Love Me (ft. Kim Dani)“, “You Cheated” and “Soulmate #1“.  Note that she is keeping a safe distance from the album and has also dug up some dirt to throw in Hyoyoung’s face as a defensive measure should she try anything with a knife.  Smart kitty! 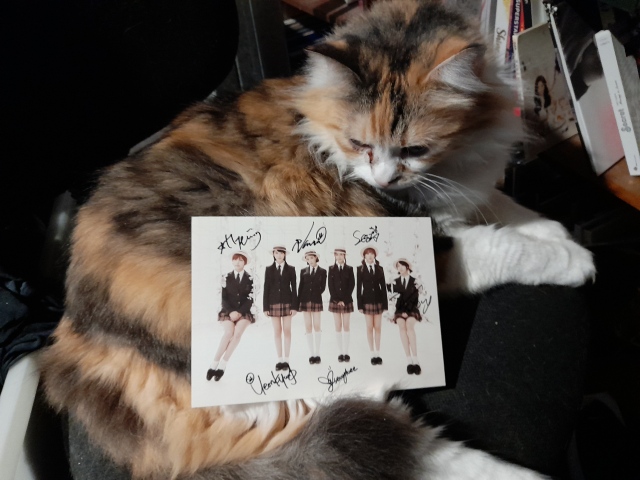 For extra super-rare blockchain value-add points, here she is again with the inner photo card, hand-signed by all six then-members of F-ve Dolls.

All of these super-HD images will be available at a special link to the person who signs up to my new $10,000 NFT offering tier on the official Kpopalypse Patreon.  This link is not hosted by an Etherium-run service so this means it is very environment, and that’s because the link actually doesn’t exist at all yet, because I will wait until someone subscribes at this level before even making it, therefore saving even more environments.  Note that the same super-HD images are also available to all of you lovely readers right now just by right-clicking the image, clicking “open in new tab” and then in the new tab deleting the bit of the URL at the end that says “?w=640” and refreshing, and if that’s too tricky they can also be accessed together as an archive over at my Patreon page, for free, whether you are a Patreon subscriber to Kpopalypse or not.  The reason why I’m giving you this content for free is because I have read that with NFTs, it’s the link itself that is the valuable thing, not the content which is in the link.  I’m not completely sure why this is the case, but these are apparently the crypto-nerd rules so who am I to question them?

Anyway that’s all for this post and hopefully you all now can enjoy very environment Kpopalypse crypto content!  Kpopalypse shall return!