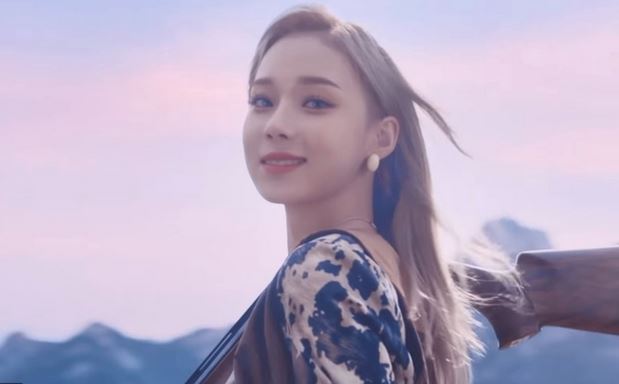 Did a photographer really take a secret upskirt photo of Winter on a photoshoot… mid-promotional interview, while they were wearing conspicuously long dresses? It doesn’t really matter, does it – k-pop fans are never ones to let the truth get in the way of a good cancelling.

Nothing all that great but at least it has a bit of fucking pep in its step, it’s still probably the best song they’ve ever had.  Hey those striped patterns in the sky, could they represent a Japanese rising sun about to burst up from the horizon?  M.O.N.T would like a word with these kids.

Weirdly, they couldn’t get the music or the visuals right here.  The found a few ways to make Wheein look like crap that nobody ever thought of before even thought she’s outstandingly attractive (look how much better she looks here in just normal casual clothes), and the song is just that usual bland rubbish that Mamamoo do for solo projects most of the time.

No A.C.E flashing their bare legs, no good song either – these guys are going to have to lift their game a great deal to compete with Wonho on the objectification surveys this year.

Majors – Rain On Me

Cacophonous rubbish, a complete car crash of various pop cliches that don’t even fit together, just a total disaster.

Majors – Dancing In The Starlit Night

Their other song is significantly better but is still ruined by a chorus that is both far too short in duration (leaving us with the boring slow verses and buildups for over 90% of the time) and has that horrible synth-pad that’s been used in literally every single song that’s on my gym’s prime time rotation list.  Whoever is writing the songs for this group needs to do a course or something.

Nu’est possibly just made mullets relevant again and I’m kind of scared.  I grew up during peak 80s mullet years and have no desire to return.

What are all those orange crumbs on the floor, did he burst out of a fortune cookie?  I think the piece of paper inside this one reads “song sucks, just move on”.

Strategically it’s clever to release this kind of “for the fans” fluff about now.  Look at how well Ms. Pacman and the girls all get along!  There’s no way that any of them have a nasty bone in their body!  Chorong trying extra hard to suppress her natural resting bitchface is really cute actually, normally she doesn’t make this much of an effort.

CIX – All For You

I’m really tired of hearing that way-ohh-way-ohh-way-ohh thing, even though I’m not even sure if this isn’t the first time I’ve heard it.  However this song is still worth a look just so it can be added to the “cringe English language intros” section of your personal comeback database.

Something related to Seventeen is something other than completely boring, which is great – about time.  I actually really like the chord progression and light feel of this song especially in the chorus.  Elsewhere it still fumbles with too many dull R&Bisms but it’s a net positive.

Genuinely unusual and cool in places, if you can get past the fact that it’s performed by people who should probably not even be allowed to be a k-pop at their age given how shit the industry is at looking after the interests of underage performers, there’s a quality song here.  Imagine this with more mature voices and it could have fit pretty nicely on f(x) “Pink Tape” album.  Let’s hope these kids are being treated okay and aren’t being beaten into the next April.

If BTS’ “Dynamite” had only one positive effect for k-pop boy groups perhaps it’s that faster beats will come back.  Pity they’re all disco beats though – not sure if that even counts.

I always hate it when I see groups pretending to do “guitar rock” to a song that is 90% keyboards.  I know they’re miming anyway, so it’s not like it really matters, but it actually does look a lot cooler when you play instrument A in a video and the sound from the speakers is instrument A and not instrument B.

When a coloured strobe is all you’ve got to work with due to budgetary constraints I guess you gotta make the most of it.

It’s like something you’d skip over on the second side of a 90s hip-hop album.

Some weird pop thing which is pretty impressive technically but sorely lacks catchiness.

Eunoia – Run Into You

And here’s another one, most notable for that huge 6-string bass.  She’s going to have shoulder problems later in life if she’s not careful.

In a week where everyone has a boring ballad (see further down) serial offender Cheeze actually has something kind of perky and nice.

It must be hard to write a song called “Love Song” because they’re usually pretty unremarkable.

Fol Trio – The Burden Of My Exams

Not sure about that song title translation, but anyway for technical wank music I enjoyed this one, probably due to the lack of a singer ruining it.

I know there’s a joke here somewhere simply because it’s UV but this has gone way over my head.

Who spiked Skull’s weed with even more weed to the point where he decided to make this.  Probably the song of both the year and the decade.  I like how it’s exactly 4:20 in length too, a nice touch.  Light one up if you can because that’s the only way you’re going to get through the next lot of videos further down.

This is what happens when IU comes over to Skull’s house, gets into the stash and starts believing for a couple minutes that the world is actually full of nice people.  Some gorgeous instrument choices and textures here, but the meandering vocal writing and general ploddingness lets it down, not that it’s even long enough to really make an impact anyway even if it didn’t suck.  It’s still the best thing in this little shit ballad boxout.

If there’s something worse than a ballad singer, it’s a ballad singer with no self-esteem.  At least Shitney Houston sung about how she thought her shit didn’t stink, which was at least honestly how she probably felt in between draws of Bobby Brown’s crack pipe.  These “nice” Korean balladeers on the other hand probably all have a hard drive full of molka.

Parc Jae Jung – I Loved You

I watched this video a few times and I couldn’t work how how he blew it.  Once minute she’s all happy and the next minute she’s all pissed off at him for no reason.  Forget about her, she’s a flake.  She’ll do it to you every time.  Totally not worth the energy of writing a ballad over.

That scene at 1:30 where he’s walking through the trees and he legit looks like a tree himself because he’s so perfectly colour-matched, kind of sums this up.

They’ve got guitars yet they still sound like this.  Lord help us.

And again.  Sure, they turned the instruments up just a little bit which is nice, but this is still boring balladeering at its core.

Helium-woman sounds boring here and the video barely qualifies for inclusion at all given that it’s mostly street scenes, which are always a big no.  Lucky that they paid that bored guy $50 to wander around and be filmed after he knocked off from work that day, that decision just got this video over the line and into the shit section of roundup.

I wonder what they’re watching on the laptop at 2:40 that has then so bored out of their brain.  This guy’s other music videos perhaps.

How unimpressed does she look while getting her photo taken at the Nugu Park roundabout.  She’s literally living the dream of about 90% of my readership and can’t even crack a smile.

Oh boy we’re sure going slow now.  Is life in Korea really this depressing?  I guess it must be.

You know what to expect with a title like that.  Weird how Kyukyun kind of looks like a slimmed-down Shindong.  Maybe those trim Shindong pics from last year were actually Kyukhun in a fat suit.

Soran – Be With Me

You can’t have subtitles and full-screen silent movie style captions at the same time, that doesn’t make sense.  One exists so the other can be made redundant.  Just like actual proper music, and this song.

One thing even more disgusting that slow traditional ballads is slow R&B ballads.  I love it how they call the song “Mutual Love” like it’s a big deal for love to be mutual, as if one-sided rapey times is kind of the norm for them so this new love they’re talking about where two people actually love each other is something totally different from what they’re used to.  It wouldn’t surprise me.

Dreary as shit and not even any Hyuna cameo to spice it up.

A diplodocus is a big slow dinosaur that moved very slowly, ate lots of plants and is now dead.  I guess that makes this the accurate song title of the week.

Soon – They Can All Go Hell Tonight

Dwelph does lots of pretty art where he does random things like get a picture of some k-pop girl posing in a field and animate the grass and clouds behind her for no reason.  That might not sound impressive, but only to people who haven’t seen the incredibly high quality of his end results.  It’s always worth checking out his stuff and if you’re looking for more YouTube channels to subscribe to once you’ve already subscribed to my own, then you could certainly do a lot worse than his.  Get on it, caonimas!