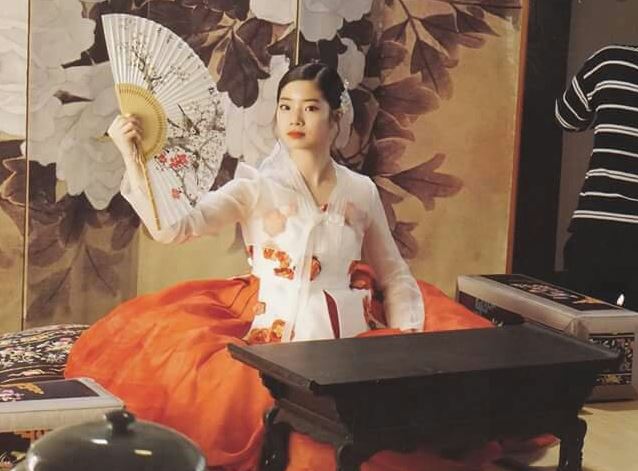 Better watch out Dahyun – apparently wearing hanbok is copyrightable now. The way we’re heading, soon we won’t be able to wear any clothes at all because someone else wore clothes once… but then we won’t be able to strip off either because we’ll just be plagiarising Lubricated Goat… so what will we do? Put theories in the comments below!

This could be any boy-group song by anybody.

And here’s the girl-group version.

They’re trying for that slow-Blackpink style energy with the riffs but the harmony is all confused and mushy like SM tend to do for some reason where instead of just fixing on a sensible modal tonality they just sort of go all over the place for no reason.  The dubstep doesn’t help matters but by that point the damage is done.  Nice try I guess, it doesn’t really work but at least it’s different.

You see, you need a consistent tonal scheme for these things.  Chunga has the same energy as NCT above but works it far better because she’s not being made to throw completely inappropriate melodies in there from some other scale poles apart from the established tonality.  Even the dumb break works better because it’s a little bit more rhythmically interesting than just generic-step.

A couple years back I went to AVCON (anime and video game convention) and I saw for the very first time custom-made roleplaying dice, and it made me laugh that this even existed.  I think that shit is designed for the dumb fucks who spell “roleplay” as “roll play” and think that numbers and randomness are more important than storytelling.  The kind of people who roll a dice when their character picks the crusties out of their ass to determine how clean their hand comes away.  Anyway the guys in D1ce are gaping at those fucking numbered tetradecagons like they haven’t ever seen anything this stupid before either, so I can relate.  They really rolled snake eyes on the music though.

The music here is so conservative that it would be enough to turn your great grandfather into a metalhead, but boy does Yoyomi look great.  I don’t want to think about how much botox fillers JYP took to get this look so he wouldn’t look silly beside her though.

Wow the bass for this song is everywhere and really cool.  Unfortunately that’s the only good thing about it.

His other song is somewhat better, and also has really good bass.  What is with this dude and bass?

Why start a rock band just to sound like an even more shit version of Powderfinger.

I’m liking the melody and harmony choice in the chorus, which adds a bit of an edge to what would otherwise be some pretty dull R&B.

What is this bullshit ad.  Is anyone buying this really?  I’m pretty sure all of these girls would get smacked in the mouth by their dieticians if they even dared look at a soft drink truck like that.

Mark Tuan, Sanjoy – One In A Million

Those GOT7 boys are probably going to start doing all sorts of nonsense songs now that JYP isn’t in control.  Prepare for the flood.

I feel my comfort levels decreasing.

The extreme nugus have all the best songs and the best videos this week, even if scat vocals ruins the latter half of this one.  Someone told me I should have saved these for the Nugu Alert series, but honestly this roundup pretty much IS a Nugu Alert episode.

As boring as waking up on a couch at a friend’s house and remembering that last night you were having fun but now you’re not.

The song is really bad but the playing is good, so I can almost tolerate it.

I’d rather listen to “Gang“.  At least that song has some personality.

My gym membership is up for renewal soon and I think I wanna cancel, find out where the people in this video go to for a workout, and go there instead.

They try to hide the trap garbage with some different production tricks but it’s like writing “no added sugar” on a mars bar – nobody is fooled.

I definitely xbf with this song.

The sort of almost get it right for the first part but then the beat changes up to some bullshit and it’s time to switch off.

One of those songs that you know will be total garbage right from the first note.  When they start off with that kind of lilting pentatonic piano phrase you know we’re in latte-sipping territory and there’s no getting out.

Don’t die of shock but I thought this coffee-shop rap was kind of nice, probably because of the early T-ara style harmony choice behind it.

It’s like those good Yoona ballads except it’s not any good.

A slightly better version of the same idea, but we have to remain vigilant.  Give these crappy balladeers an Inse and they’ll take a mile.

IU – Through The Night – cover by Coco (KAACHI)

So what is actually wrong with Kaachi, someone please tell me.  Yeah this cover is boring, but the original song is boring too, as is 90% of all k-pop songs everywhere but I don’t see anyone complaining besides me most of the time.  Kaachi fit right in!  Yet supposedly “woke” k-pop fans picked on this girl and her friends and made them cry because k-pop fans secretly think bullying and racism is sexy.  Look at her, she’s so nice!  How can you be mean to that?  K-pop fans are vermin.

That’s all for this week’s Kpopalypse roundup – more next week!