It’s time for another POSITIVE post!  Today we’re looking at all the POSITIVE things about Red Velvet’s Irene, and why you should stan! 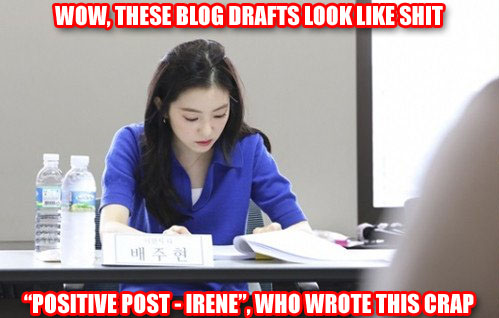 Before we get started on the important reasons why you should throw all your undying support behind Irene, first we need to be able to POSITIVEly identify Irene, so we can be sure that we are supporting the right person.  Of course as regular readers will know, identifying Irene is not as easy as it seems.  Fortunately for you, I have prepared the following comparison which should hopefully be useful for you to increase your ability to tell Red Velvet’s Irene apart from other idols who are not Red Velvet’s Irene. 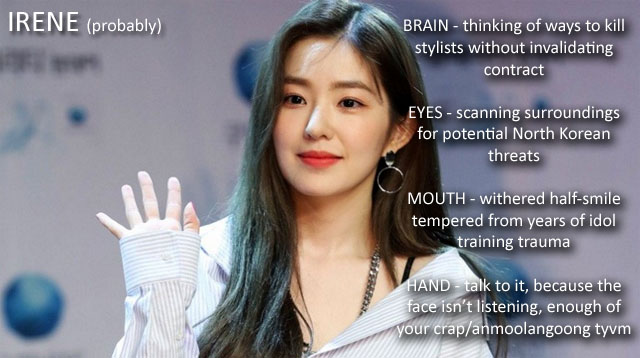 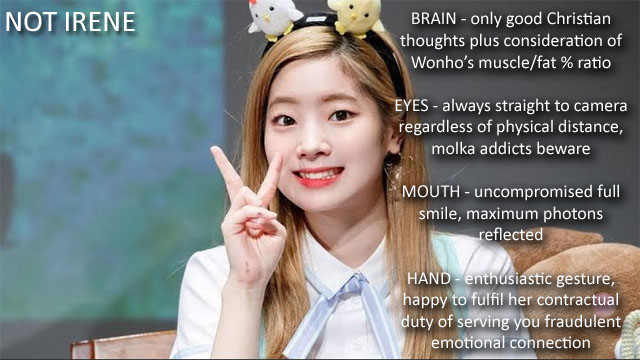 Now that you are armed with the above handy reference, let’s look at all the important reasons why you should be POSITIVE and support Irene through her current controversy, as well as just in general.

Reason to support Irene #1 – Irene knows that stylists are cunts

Have you ever had to endure pre-filming makeup and styling?  I have, and let me tell you, it would drive all but the most tolerant people up the fucking wall.  Having some woman prod you with some weird pad thing on your chin for ten plastery minutes under hot lights just for it to look exactly the way it did before but with a bit more matte while she chews gum and gossips with her workmates about her boyfriend’s eating habits or who got knocked out on some dumb “reality” show nobody with a brain watches sure isn’t much fun, but Kpopalypse is a crusty old man who requires minimal makeup so at least for me the ordeal is over with quickly.  While in my situation I feel like there’s no excuse to give these poor underpaid stylists a hard time, I can definitely empathise with someone in Irene’s situation, who might have more of a high-stress environment than myself to deal with and may have a more solid motivation to go Christian Bale on somebody’s ass.  Imagine if you’re someone who looks like Irene, who is very attractive in that standard cookie-cutter way, and therefore the stylists probably spend hours enhancing your generic facial features and achieving optimal beauty-standard adherence.  Then imagine that you’re as popular as Irene and so you’re constantly being asked to do commercial films, endorsements etc and you find yourself in that styling chair nearly every other day.  Then imagine on top of that, that you actually know a reasonable amount about how good styling is supposed to work (because you’ve been the recipient of some of the best styling in the business for the better part of a decade), and these latest crop of bitches keep fucking it up half the time.  You’re in the middle of a three hour pre-filming makeup session and you’re holding very still and being very co-operative so they can get the eyeliner just right, and it’s taking forever, and because you’ve having to wait so long you start thinking about other things like what your lines are for the advert you’re about to do and what’s for dinner later and why the fuck did you even sign up for this crap in the first place, and then a tear starts forming in the corner of your eye as you think about how you’re wasting your youth on superficial bullshit when you could have gotten a higher education and contributed to society more meaningfully and the girl who’s doing your eyeliner who is kind of new is a bit shocked because she didn’t expect a tear to just form for no reason so she flinches back a centimeter or so and eyeliner goes all over your eye and it fucking stings and you scream “FUCK YOU BITCH YOU RUINED IT HOW FUCKING USELESS ARE YOU, HUH?  This isn’t rocket science you FUCKING AMATEUR!  Go back to makeup school if you can’t FUCKING keep your hand steady you CUNT.”  So she runs off in tears and is sobbing but that eyeliner still stings like a bitch and you think you can feel a bruise coming up, so you yell after her “CRY ME A RIVER you fucking flat slag.  You had ONE job.  Jesus FUCKING Christ how the FUCK do SM hire these idiots.”  You know you’re now stuck for another hour in the makeup chair at least, as the next person will have to not only fix her mistake but also apply extra makeup to control the appearance of your now rapidly-swelling eye cavity, as if this session wasn’t already long enough.  The staff scramble around awkwardly to find a replacement, all visibly terrified of you – as they should be.  You sigh and sink back in your chair.  Nobody else had better piss you off today. 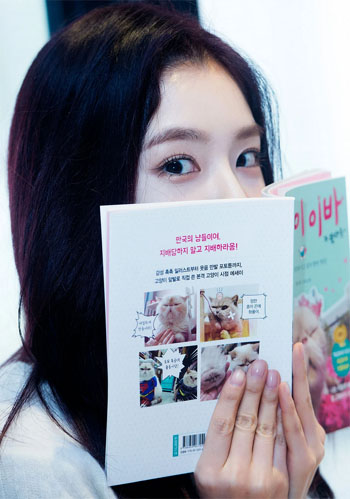 Did you know that Irene read that book about cats that one time?  You can see her with the book above.  Everybody loves a woke and well-read idol.  She apparently also read some other stuff about feminism or whatever, but nobody really cares about that too much, I mean Irene reads a lot of things, she likes to read a lot apparently.  In fact given her voracious reading habits, statistically there’s a reasonably good chance that she’s reading this right now.  Hey Irene can you tell your songwriting friends over at SM Entertainment that if they absolutely insist that they’re going to also write for Loona can they please get their shit together and do it properly, cheers. 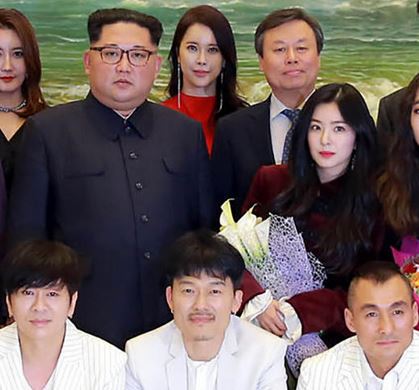 Let’s not be super-quick to cancel Irene over some backstage friction – remember she has met North Korean leader Kim Jong Un.  Sure, her body language when doing so screams “get me the fuck out of here” and she now has a glazed-over traumatised look in her eyes that has followed her around ever since he insisted that she stand next to him for photoshoots to enhance his reputation as an erudite ladies man, but when was the last time you met a dictator and took happy-snaps.  Who knows what state secrets Kim Jong Un made her privy to.  He was probably whispering sweet nothings in her ear all through her North Korean trip, like “you’re so much bitchier looking than all my staff who are afraid of me, I wish they would look at me like that just one time” and “you have unlocked the demilitarised zone in my heart”.  Imagine how that type of exposure must have scarred her, but we can at least be certain that she has Kim Jong Un’s support.  Be careful with what you say about Irene in public on your social networks or you may find yourself getting picked up by some guys in an unmarked black van headed straight for Organharvestville.

Given that Zimzalabim is one of the worst songs k-pop has ever produced, you might think it odd that I consider it a reason to support Irene.  However remember that even the most powerful idols generally do not get to choose their songs.  It’s bad enough having to put up with some unwashed stylist putting her armpits in your face while she arranges your hair and botox shots, imagine if the result of all that sitting around for hours holding your head “just so” so they can do their shit is just so you can go out and “Zimzalabim” afterward.  Look at Irene’s complete lack of any kind of emotioinal labour in the video, she doesn’t give a single fuck about this song.  I bet none of the support staff stuck up for the way she felt either.  “I hate this fucking song, why do we have to do this crap” Irene says to herself as the makeup girl sterilises the botox needle.  “What a spoiled bitch, I’d give anything to be in her position”, thinks literally everyone else in the entire fucking room, as they evade the subject and try to refocus Irene’s attention on how good she’s looking today in the hope that appealing to her vanity will settle her mood down a bit.  No suck luck.  “Zim-zala-bim Zim-zala-fucking-bim, I’d like to meet the person who wrote this trash, I’ll zim their bim so hard that they won’t be able to go to the toilet unassisted for a month”, Irene grumbles.  Terrified but completely unempathetic, the support staff don’t care.  “Hold still, dear” says the girl with the needle as she gently injects botox under Irene’s eyebrow.  Forgive Irene if she’s mean occasionally to a few support staff.  They should be grateful that Irene just yelled and glared at them a bit, I bet she’s capable of so much more.

Actually she isn’t to me.  Let’s just skip this one.

As if Irene doesn’t have to deal with enough shit, she also has to deal with Wendy.  Can you imagine the pain in the ass that would be?  There’s Irene and the other girls just trying to get a good night’s sleep in the dorm, when Wendy rolls over and says “listen to this cool impersonation!”  “Fuck, not now with this shit Wendy, I’m tired” Irene groans as she flips the covers over her head.  Wendy continues on undeterred in a black American accent: “I like eating fried chicken and watermelon!”  All the other members of Red Velvet, also trying to get to sleep, simultaneously groan.  Irene sits up and glares at Wendy, her sleep truly broken at this point: “Wendy it’s bad enough that we’re losing half our American fans plus our self-respect when you do that fucking shit in public, can we not also lose our sleep too?”  “I’m hurt!  You said you liked my impersonations!” Wendy complains.  Irene sighs – “Yes but you can’t impersonate black Americans, they’re a marginalised group!  When you say stereotypes you just make us look racist!  If you want to be racist, do it on your own time and stop dragging the entire group and company down with you!”  Wendy scoffs.  “Black people aren’t marginalised, America had a black president!  Anyway I’m not racist, I just think black people are funny!  Maybe YOU’RE racist because hearing my cool impersonations bothers you!  Irene the racist!  Why don’t you join the KKK, racist?”  “I don’t want to talk about this now, just go log onto Ilbe or whatever and leave us out of it, let us get some sleep you fucking Nazi, fuck”, Irene groans as she lies back down and pulls the covers over her head.  It’s hard living with groupmates closely when you don’t see eye-to-eye on important social issues.

If the above reasons aren’t enough, as soon as this lame Irene scandal broke, everyone on the Internet came stampeding here just to see if I’d written anything, and this was before I published this article.  So now I have to publish an article anyway just so I don’t have to answer 235 questions about “what’s your take on the Irene thing”.  This means you get another article as a direct result of Irene’s behaviour, that’s a good thing, right?

That’s all for this post!  Remember to support Irene and Kpopalypse will return with more positivity, soon! 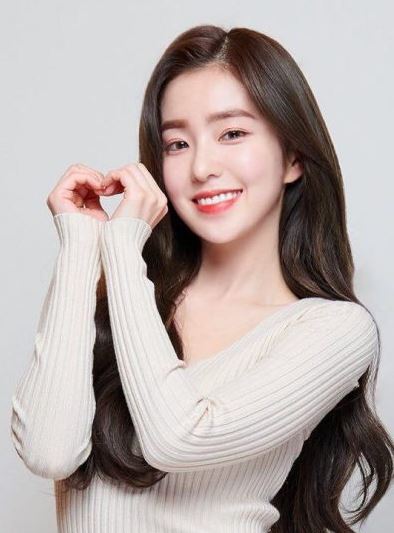