It’s about that time for Seoul Fashion Week and you know what that means – it’s time for another episode of Kpopalypse fashion class!  Read on for this special Chuu edition!

Did you know that Kpopalypse fashion class is now six years old?  That’s a lot of fashion knowledge!  Previous episodes of Kpopalypse fashion class have looked at different styles of clothing and their potential for enhancement of key areas of the female form, and I think by now we should all have a handle on the basics of k-pop fashion smarts.  For this episode we’ll change things up a little and look at specific applications of fashion sensibilities to achieve maximum results.  This episode is going to look at applications of this knowledge via a specific example, which is Chuu from the k-pop girl group Loona.

Followers of this blog may feel that Chuu is someone who should not be physically attractive to Kpopalypse.  Theoretically, this is understandable, as Chuu has a “triangle shape” body, which means:

These characteristics are considered more “stereotypically masculine” and generally don’t appeal as much to a boring cishet asshole like Kpopalypse, yet regular readers will know that Chuu is a consistent feature on the Kpopalypse bias list anyway.  Chuu routinely beats out other k-pop girls who have figures that one may consider to be typically more in keeping with Kpopalypse’s “areas of concern” such as Twice’s Jihyo, Blackpink’s Jennie and T-ara’s Hyomin.  How is this possible?

Of course, Chuu is the lioness of k-pop aegyo and this no doubt has an impact, however in this post we are going to COMPLETELY IGNORE Chuu’s formidable powers of cuteness and focus on physical appearance only.  How is Chuu dressing and accessorising?  How can readers who have a Chuu body harness the power of Chuu for fashionability purposes?  Why does she look so cute doing the heart thing when literally everyone else in k-pop looks like an insipid fool?  Let’s look at some examples of Chuu.  Note that it’s hard to find decent high quality pictures of Chuu that show her full body unobstructed by a heart sign or some random plush toy, so I hope you appreciate the effort that went into researching images for this post.

Here’s Chuu in a rare relatively aegyo-free moment, selected for this post so we can be objective and ignore the aegyo.  Note the following characteristics of this outfit, which really works well for Chuu’s body type.  The choice of black on the shoulders minimises width, while white frills and lots of detail in the chest region is volume enhancing, and this is further helped by Chuu’s neckline being as as high as possible.  The dress length also creates a form-building line around the thigh area, so she doesn’t look as skinny in the lower half as usual.  Also consider her actual pose, no other idol poses like this, how you carry your body is very important, she is clearly about to release an aegyo götterdämmerung on us all.

Here’s Chuu making a concerted effort to be appropriately mellow while singing a ballad, chosen so we can disregard any aegyo aspects and focus on her physical appearance only.  The top appears plain but it also has those large buttons on the front, which is some subtle but helpful accessorising.  Also Chuu has her hair and arms in the way of her chest throughout – remember that “things in front of your chest” is always good when it’s time to enhance volume.  The lines on the clothing are vertical rather than horizontal, this means that Chuu misses out on the form enhancement of horizontal stripes but it also means that the vertical lines take the eyes down rather than across, minimising shoulder width.  Also note that even though it’s a ballad Chuu still can’t stop herself from releasing the aegyo demon both immediately before and after the vocal take, clearly aegyo for Chuu is as essential as breathing and three minutes was the maximum that she was able to contain her primal urge to gesture to the viewer and grin like an idiot.

Here’s Blockberry desperately trying to constrain Chuu’s aegyo into something vaguely resembling “normal person energy” for long enough for them to take a picture of her for a photobook.  While at first glance her outfit appears plain due to the uniformly black colour, closer inspection reveals the added bulk of the undershirt and again large buttons.  The neckline is as high as possible and she’s wearing double collars, this puts even more focus around the neck which de-emphasises the shoulder region.  Chuu’s deer-in-headlights stare shows that she was clearly sedated with drugs for this shoot, or maybe a cute kitten or some pie, the studio probably had to be forensically cleaned after this session to remove the dried blood and entrails after several staff members were murdered by Chuu’s cuteness once she awoke from her artificially induced hypnosis.

This bland beige-grey school uniform look has been chosen for this post to eliminate the focus on Chuu’s aegyo and show readers how Chuu wears serious school attire.  Conventional fashion wisdom dictates that if you have a more masculine figure, that you should try to dress more feminine to counter-balance this.  However, Kpopalypse is all about unconventional wisdom, and the above photo of Chuu demonstrates that masculine clothes on a stereotypically masculine body shape can work very well and be very attractive, regardless of how much perceived masculinity your audience prefers.  Note the high level of upper-body detail, a well-dressed Chuu is often drawing attention to a high, detailed neckline and the vertical middle third of the torso, where the white shirt is visible.  The striped tie and the strong black jacket collar outline give the eye lots of information to work with, leaving the viewer’s eyes visually satisfied even before Chuu starts doing heart signs and screaming in your ear about cake or something. 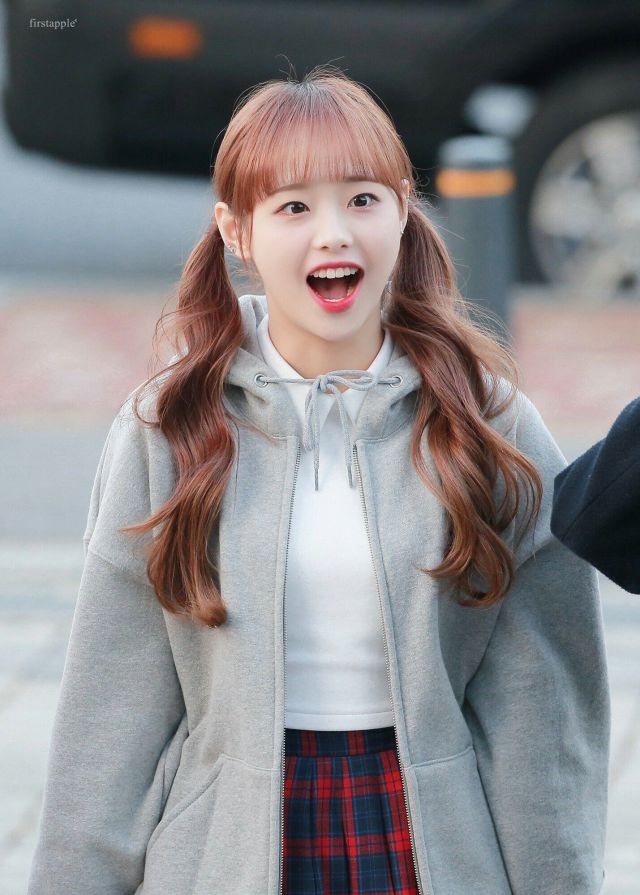 Even in casual clothes Chuu at her best adheres to the same principles.  Once again we have a high neckline with a collar, the jumper tie providing some extra detail, the extra information provided by the hair which is always falling in front of the shoulder when there isn’t a plush toy in the way, and… oh fuck, I can’t do this anymore.

Even when the jumper is zipped up she still pulls it off.  Look, the fucking thing has cherries on it.  She can’t help herself, can she.  Chuu’s aegyo wins. 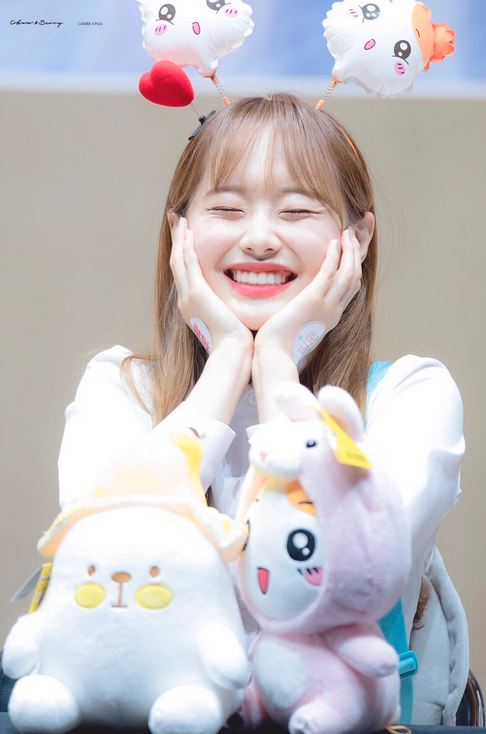 Might as well bring the pictures with plush toys in, fuck it.  I am destroyed by aegyo.  I bow down to the aegyo queen.  Chuu is aegyo.  Aegyo is Chuu.

That’s all for this post.  Kpopalypse will return after a brief recovery period where I will stare at a room with nothing in it for 12 hours straight to readjust my brainwaves back to normal human behaviour.  Thanks for reading!