It’s time for a special edition of Kpopalypse Nugu Alert!  The nugu series that will not die is back to take a look at yet more k-pop nugus!

Whoever thought that Kpopalypse Nugu Alert would make it to 50 episodes?  Perhaps very few, but never underestimate the determination levels of Kpopalypse to bring you nugu content.  My roots as a nugu supporter go back far beyond the history of my interest in k-pop, back to the 1990s when I first started radio DJing, playing music nobody had ever heard of (myself included) late at night and putting airplay royalties in the pockets of starving musicians worldwide.  When I started approaching k-pop writing I didn’t see a need to change my approach – why focus on only the most popular artists?  Yes some great (and not-so-great) music have come from k-pop’s biggest names, but there’s a whole wealth of other k-pop out there to explore and the vast majority of it is by people you’ve never even heard of before, and in many cases possibly never will again.  Rest assured that Kpopalypse Nugu Alert has more submissions than ever before and won’t be going away anytime soon, that’s why this special 50th episode features four videos instead of three!

I’ve decided for this edition to focus on k-pop dance.  It’s a field that I don’t cover much, as dancing is something that I honestly know very little about, one of the few areas related to the music industry that I have virtually no experience in or direct behind-the-scenes exposure to whatsoever.  Of course that certainly won’t stop me from writing a whole load of complete bullshit about some random k-pop videos, so let’s get into it!

I thought I’d start this edition of Kpopalypse Nugu Alert with the technically best dancing first, just for all you trained dancers who are probably going to be terribly upset as I completely fail to talk about dance in any kind of correct manner (now you know how I feel when I see you all writing music reviews).  I’m not 100% sure about this, but I’m at least 95% sure that the duo dancing in Moonshine’s fairly nondescript “Broken Glass” are in fact the same dancing couple that appear in Sugardonut’s amazingly good “Imagine, Close Your Eyes“, one of the most iconic and overlooked k-pop songs of the 2010s.  These two have actually appeared together in a few other videos since that song came out in 2016, but this is probably their most memorable newer performance as I’ve forgotten what the other videos are.  If it isn’t those two, it certainly looks like them as they’ve both got the same semi-improvisational style in this video, and you can see some of the same moves in effect, with the guy doing a variation on his usual popping-and-locking, and the girl doing her trademark limb-spinning thing, however they’re both also meeting in the middle with some more regulation funk-disco style moves that seem more tightly choreographed.  Their names come up in the video final credits so I guess you could check, but whoever they are I hope they’re doing well out of these dance gigs and aren’t squatting in a makeshift shelter under a highway overpass somewhere holding signs saying “will bust moves in your nugu video for food”.

Notable attribute: the guy gets flats but the girl is doing this in heels, respect

Do you miss the days of “Roly Poly” and wish that k-pop disco dancing would become a trend?  Did you appreciate BTS’s “Dynamite” but felt let down because the dancing was just a bit too… well… good?  Have I got a video for you.  It takes a while for the moves to get going here, but gradually H3ather Sun stops messing around with that machine that dispenses all the money she isn’t making and ups the ante on her dancing until soon the entire video production team is doing some extremely bizarre disco shit.  However it’s only the moves that are disco – the clothing just seems to be whatever everyone was wearing at the time, and the actual music is something else again – sure it’s got the traditional 16th-beat open hi-hat beats in place, but they’re being married to some muscular instrumental choices that actually rock far above what is usually considered standard for disco material.  This is a genuinely cool song that’s helped along even more by a breakdown that is bizarre and different but actually also makes sense in context (rather than being random trap or dubstep etc thrown in because it’s trendy) and what we have here is actually one of k-pop’s best new nugu offerings in recent memory.

There’s so many things that I haven’t been able to figure out about Akis Korea.  Firstly, I’m not sure if Akis Korea is a group or a person.  I’m also not sure if they’re called “Akis Korea” or if they’re just called “Akis” and they just like putting the word “Korea” after it for positive branding purposes because they are very concerned about the annual average rainfall on Dodko Island like M.O.N.T are.  Also, the video is basically comprised of a girl who dances, but I’m not sure if she’s actually the singer that we are hearing or someone else who is just a dancer or model.  Certainly her lips don’t even attempt to mime the words until about the three minute mark in the video, and even then she misses the timing on most of the words, which made me think that she was a dancer instead, but then when I saw the quality of her dance moves I felt that she didn’t seem very comfortable with that and thought that maybe she was instead a singer.  Their Instagram didn’t really shed much light on anything either, so who the fuck knows, but please enjoy the spectacularly awkward vogue-esque moves of whoever this stony-faced girl is, if you can make it far enough through the shockingly bland music and incredibly drunk camerawork to get to the good parts.

Notable attribute: video shot in exactly the same room as some of H3ather Sun’s video, they didn’t even move the props

I’m not sure if “like me” is a request, a demand or a threat, but after listening to this horrid song I feel strongly compelled to resist.  These girls certainly also have somewhat of a disco vibe with the flared trousers, but the actual music is nothing like that and actually more of your trendy nu-school bass-heavy slow dance routine that all the girl groups are doing these days.  The video is a real visual mismatch, it sounds like a song that needs to be accompanied by a dark room, lots of strobes and mood lighting, and maybe a random sports car in the background for them to not drive, but instead the video director opted for a day on the sunny rooftop, which I guess was cheaper but unfortunately the abundance of clear lighting just highlights the general lameness of the dance routine.  Some T-ara style fast cutting plus a good smoke machine and some heavy strobes would have been just the ticket to obscure this limp dancing enough to make it look semi-acceptable, but on the bright side nobody who watches this will call Blackpink’s Jennie lazy ever again.

Notable attribute: video editor determined to use every type of fancy transition cut that his video editing software can load up, all in the one music video 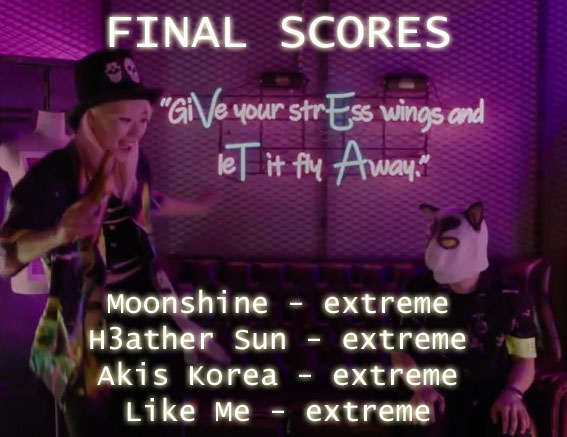 That’s all for this episode of Kpopalypse Nugu Alert!  The series will return – you can count on it!