With the annual Kpopalypse objectification survey now underway (vote here, caonimas – or don’t complain when your fave doesn’t rank high next month!), and competition for the “most fappable” k-pop of the year heating up on Kpopalypse blog, it’s only natural that nugus all over Korea have considered how to get high placement in these important polls as well as chart success and fame in general.  However toeing the line between “not sexy enough for anybody to care” and “too sexy for anybody to take seriously in the world of the k-pops” is a tricky task.  It becomes even more of a challenge when the extra hurdle of limited nugu budget is thrown in.  Tricky is not impossible however, and in this episode of Kpopalypse Nugu Alert, we’re taking a look at some nugu videos and their attempts to meet required standards.

Some of you avid nugu followers may actually remember Haerin, as a member of a group called Tweety who had a song called “Bad Boy” which certainly veered in the “fapability” direction.  Tweety are assuredly Z-list however still are way too popular to make Nugu Alert status, but they still appear to be together in some form, or at least the company are, as they did put out a teaser for “Freak Out” on their group channel.  Haerin in solo mode however definitely makes the cut as a nugu even if I’ve had to deduct some nugu rating points due to her relatively prestigious history, and she has maintained a similar visual presentation motif to previous output in “Freak Out”.  Resources deployed in the direction of meeting required standards include tried-and-true fap-friendly moves like the “backing dancers just about to grope boobs but singer is having none of that funny business thank you” dance move (2:03), the “walking in a random direction very purposefully for no clearly specified narrative-driven reason in a manner that gives a slight almost-imperceptible boob bounce” montage (1:46) , but the winner is the “smash something against your wall with your back turned so everyone can have a nice rear shot in those tight leather shorts” scene (1:41) which is definitely a pitch for votes in the ass poll.  If you haven’t voted yet, Haerin will thank you for considering her glutes.

Notable attribute: cyclist at 0:32 captured en route to a much better video shoot

I’m not actually sure whether the girl is Dopein, Santa Paine, or just someone else who has been dragged along to take photos to make the video look more interesting, but if the video blurb is to be believed this is a “behind the scenes of her/their album”.  At first I thought this was odd because there’s certainly zero actual music-making happening in the video, but then I remembered that the word “album” in the context of Korean pop music often actually refers to the booklet, not the musical product (which is why one-track singles with a booklet sometimes are called a “single album” in Korea).  Maybe the booklet for the album this is coming from is worth a look, as Dopein/Santa Paine/Mystery Girl X looks a bit like a budget Eimi Fukada, although having said that Eimi Fukada herself also looks like a budget Eimi Fukada, so you could probably just do a Google search with “safesearch” off and get more (literal) bang for your buck there.  Hopefully this reference is enough to keep content those of you who keep asking me for a sequel to that “K-pop girls who look like busty pornstars” post that I wrote back when I had a full head of hair, you can thank the video director’s decision to just videotape the photo shoot and make that the music video, instead of actually making a music video.

Notable attribute: cool “everything will be ok” sticker on the motorcycle helmet here to remind you that there is life after COVID-19 and Korean traffic

The definition of what constitutes a “super party” has definitely been stretched in the video for this song by Flantic and Jin Denim – apparently a “super party” constitutes a table full of drinks, some neon mood lighting, balloons of course because every k-pop video with a party in it has balloons up the ass, and three of the most-dragged along women that I’ve ever seen in a k-pop music video.  If you’re hoping for some “classy-sexy” action in this episode of Nugu Alert, then this video is as close as you’ll come, but arguably that’s pretty close as I’m pretty sure these girls didn’t specifically consent to any of this, just watch for the “who the fuck do you think you are, get out of my personal space” glare at 1:40 for all the confirmation you’ll need.  All three of these women struggle valiantly to keep straight faces in the scenes where they’re lined up sitting down behind some idiot rapping (which surely must have required a few takes), and their general non-committal vibe throughout everything that happens here just screams out “I was led to believe that I was going to be the token eye candy in a much better production than this one”.  The real downer is that the paper cups being passed around mostly don’t actually have any drinks in them (blatantly obvious from the casual way the partygoers are swinging them around), you know when you’re on the set of a nugu video when the director won’t even get a punchbowl started because there wasn’t the budget to hire someone to cut up fruit.

Notable attribute: at 2:23 the women are “dancing” but their feet aren’t even moving, they are out of fucks to give 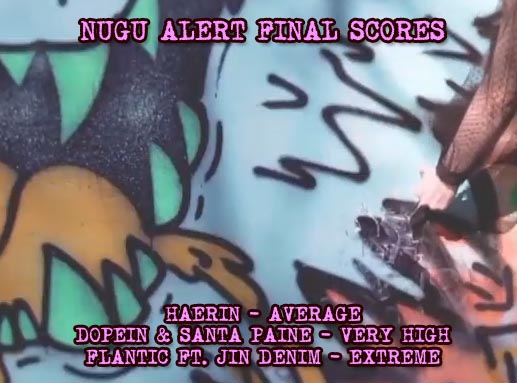 That’s all for this episode of Kpopalypse Nugu Alert!  The series will return with more episodes at a future date!