It’s Kpopalypse here with an important announcement to help out the k-pop fan community!

You know what it’s like.  You’re trying to run your innocent fun poll or survey about “the best k-pop girl group EVAR”, and suddenly you’re besieged by death threats, bullying and harassment because some k-pop fandom members are completely insane and can’t read anything about anyone ever without reacting like pieces of shit who should be killed.

What a shame that there are people like this in the world who would threaten account owners and make them feel unsafe about a simple well-meaning poll.  Of course we know it’s only a small minority ruining it for everyone, but until it becomes legal to hunt down these people, lock them in a room and subject them to repeated listenings of “Zimzalabim” until they piss their pants and promise never to do it again, we’ll obviously have to live with a small sector of k-pop’s fandoms being human garbage.  Sadly, it’s probably never going to change, there’s always going to be “those few people” (or “those many people” if we’re talking about some of the hive-mind cult-like behaviour of certain large fandoms out there) who can’t obey simple rules of society such as “don’t send people death threats”, it’s something that’s probably never going to go away as long as we have k-pop companies inciting rabid fan worship, and feeble-minded people who struggle to separate fantasy from reality.  So what to do about this issue?

This is where Kpopalypse can help!  Kpopalypse blog has been running now for nearly 8 years, and:

Naturally all this doesn’t go down well, at all times, in all corners of the Internet.  If you’ve ever wondered how much hate I receive on a daily or weekly basis, from people on the Internet who don’t even know me, the answer is “yes”.  I won’t publish any of that hate here but you can easily find your own fun examples by searching the darker corners of the Internet yourself.  If you’ve ever wondered how much of that hate manifests itself as some of the more toxic behaviour that k-pop fans are notorious for, such as:

Then the answer is also “yes”.  However I continue to post unconcerned with all of this.  Sure, I have a few thousand people on my Twitter blocklist, but that’s only because I’m a concerned citizen who likes to keep my corner of the Internet clean and tidy.  There’s nothing stopping any of those people from sending me private messages of hate, threats, and so forth – and they do.  It’s okay though, I just ignore it and carry on, because I don’t care (although I reserve the right to publish the really funny ones).

Although I obviously have a very thick skin when it comes to this Internet business, clearly others do not feel the same way.  Many other site owners and account owners are honestly terrified or at least concerned when they start receiving the kind of messages in their private inboxes that I routinely collect on a daily, sometimes even hourly, basis.  The example at the top of this post saddens me – why can’t someone post their innocent girl-group poll without being harassed off the Internet completely by mean socially-challenged cyberbullies?  So I have come up with a solution.

Site/account owners: from this day forward, Kpopalypse is offering to host all of your “problematic” website poll and survey content.  If you have a poll that you want to conduct, that might contain controversial content that could ruffle some sensitive feathers among the k-pop community, such as:

…then send me the questions that you would like to be in it, and the general format of the survey, and I will host the Google form for you and send you the link so you can share it at your leisure.  I will collect your results for you, delete all the lame edgy “we’re gonna get you/I know where you live” content by fandom losers-at-life, and send you a nice clean CSV without the unwelcome input of any mouth-breathing k-pop cult members who should have their internal organs recycled for use in life-saving surgeries to save normal people.  Since I probably don’t give any fucks about the actual poll results (because if I want to poll people I’ll just do it myself) you can be guaranteed data of exceptionally high quality.  Kpopalypse is happy to perform this service free of charge for any site owner, although if your poll is VERY complicated and long I may ask for a small favour in return (nothing scary, just a shoutout for all the effort or something probably, and perhaps the freedom to use some of the death threats as fun future post content).  You can get in touch with me via Twitter, or if you’ve shut down your Twitter account due to extreme harassment, try my email (in the “about” section of this website)!

Hopefully this service is helpful to you all – and happy polling! 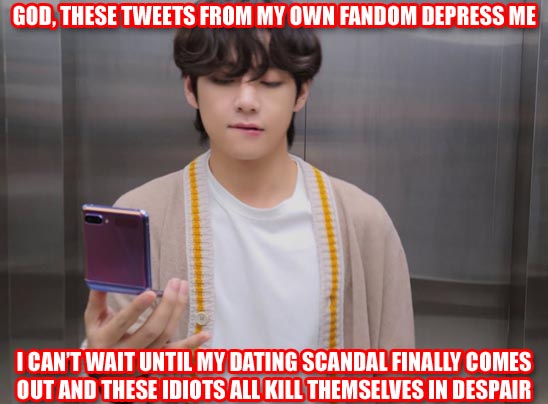