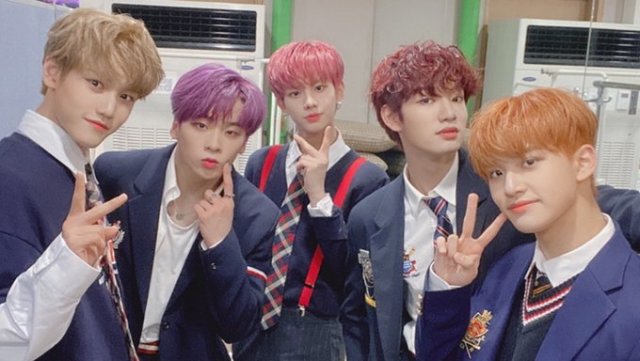 I don’t know what people are talking about with this whole MCND saying “bad words” thing… I mean I didn’t hear them use the word “clout” once?

Suga lends some of BTS’s signature unremarkableness to IU, and the results are musically as conventional as you would expect, but I’m still glad this happened as it’s the best IU has looked in a video since “Through The Night” (and I’m not talking about the animation, although that’s good too).

Had potential but the rhythm is all wrong for this type of song.  Something other than that mid-tempo swing style would have been great, imagine this song with the same melodies and chords but also the type of track Infinite’s “The Chaser” has, that’s what we fucking need, not this poo.

Once again it’s alright but the beat is just a little too zombified for this to kick off like it should.

Oh wow it’s the rap version of that shit computer game “Lost Daughter” that I played for my livestreamers a few weeks ago.  Boy that was shit and so is this.

BOL4 have just “done a CSS” where the one person who was the musical brains behind the group has fucked off and now all we’re left with is the image.

A good song if you’re a bass guitar student wanting to do something a bit advanced, but there’s not much else here to care about.

This music is too old-school even for my geriatric ass, but the lady in the lace top mrs.

If only the music was as energetic and engaging as the dancing.

Dreamcatcher, AleXa & IN2IT – Be The Future

Dreamcatcher socially distance themselves from their metal image and return to Minx days for a song which should keep everyone involved at least 200 cm away from any of my year-end lists.

Three remixes of NCT 127’s “Kick It”, none of which add anything of interest

I actually prefer the original to all three, even Hitchhiker surprisingly doesn’t really do all that much with the formula.

Oh wow, they must be a legit rock band because they passed the Super 55 test.  Now he’s just gotta learn to not cup the back of it and close the vents off with his fingers, his audio engineer must be getting pissed off about all that feedback.

It doesn’t sound too bad but it’s just kind of the same thing all the time, hear the first twenty seconds and you’ve heard it all.

Same problem here.  A great video with the singer staggering around aimlessly, unfortunately so does the melody.

I guess if you’re going to the club to get smashed you might as well make a music video to your dull disco funk thing.

Actually not bad.  It’s worth turning on the subs for this one – thank me later.

The reason why you’re dancing and nobody else is, is because your music sucks and you’re the only one who is too dim to realise.

I legit yawned two seconds into this and I think I’ve pulled a muscle in my jaw.

I could tell something didn’t look right about that pizza before they started eating it.  Someone call the health department.

If you’re wondering about the like/dislike ratio on this one apparently this guy said something like “I don’t completely love BTS at all times” back in 1863 and a few people still remember that.

K-pop has taught me that when people don’t show their face in a music video there’s usually a good reason.

There’s an Australian group called George, and they suck too.

This both sounds and looks like clinical depression feels.

Way too much high production video work here for a song with less than 1k views.

Monday Kiz x Ken – To Us Who Have To Endure

Whenever I think of Monday Kiz I always think of Happy Mondays who were a band full of of drug-addicted losers who made incredibly bad music that you had to be on life-endangering levels of acid to like.  I’m not sure if this ballad is worse, or if drugs would help it any more.

She’s right – the song just ended and I can’t even remember how it went.

Lee Soo Young – A Teardrop By Itself

SM unthaws one of their veteran singers from cryogenic storage and the results actually aren’t too bad, like Dreamcatcher at half speed without the guitar.  Actually there is a little bit of guitar in this, but you could be forgiven for not even noticing.

Okay what is this and why does it have a ton of YouTube traffic when it sounds like literally everything else ever.

Just another forgettable generic-as-they-come ballad that everyone will go “oh wow, I love that voice!” about today and struggle to even remember at all in two weeks from now, just like the ten other songs submitted this week that sounded exactly like this and that I deleted without even covering.  You have no idea how much shit like this comes out.

Lee Jinjae – I’m Sorry For Everything

So you should be.

This song sucks too but I just wanted to put it here and support these guys because they’re a bit chubby and Kpopalypse wants to be equal gender opportunity when it comes to stanning people in the k-pop world who aren’t afraid to weigh over 53.1kgs.

Yoyomi – How About Leaving On A UFO

Even though I’m subscribed to Yoyomi’s channel, it’s really easy for me to miss stuff because she’s so prolific.  Anyway this came out just over a month ago and it’s here to save this roundup from being musically worthless.  Just try and get past the fact that Yoyomi is wearing a dress so hideous that even she didn’t even want us to see all of it, if you can.

Faker might still arguably be the best League Of Legends midlaner in the competitive pro gaming scene, but here he struggles to defend himself against a 2 v 1 as Red Velvet’s Joy and Seulgi pull off a surprise ambush from the backstage concrete jungle.  Faker’s reflexes falter as he is not able to command: protect himself from showing severe awkwardness, while the girls block his escape path and use their charm to demand selfies.  After meeting them and being thoroughly exhausted, Faker admits that he’s had enough and is not interested in coming back, I think he filed a report with Riot Games over this unfair gank and we might see some changes to the meta soon.

That’s all for roundup!  Kpopalypse will return with more new songs next week!