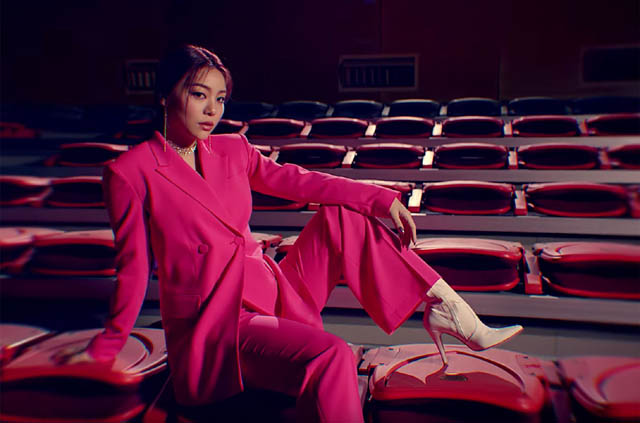 That’s a great photo of Ailee even if the colour-matching is a bit cornball.

This song isn’t bad but was begging for big sustained distorted guitar chords and crashing drums, instead we get this wimpy drum machine thing.  How do Happyface keep fucking this up.

Really not what anybody wanted a Yezi comeback to sound like but it’s not too terrible as far as ballads go and at least she looks good.

On the other hand Super Junior’s new song actually is too terrible for public consumption.  You know that even SM knows the song is a turkey when Shindong actually gets significant lines during the chorus.

Golden Child – Without You

The day I stopped giving a fuck about IZ.

You can always tell quite new boy groups because they still have a lot of members as half of them haven’t quit yet due to anxiety or been busted for drugs.

Maybe theirs came true but mine sure didn’t.

I know this seems crazy in 2020, but if you go far enough into their back catalogue Davichi did actually have a few upbeat songs.  I wonder if they ever miss those.

Pointless and stupid.  I actually looked up what “Hakuna Matata” meant because of this song, figured it must be important given how often they say it.  How wrong I was.

Better than any song by someone called “Chillin Homie” titled “Wassup” has any right to be.

Kana Bathe – When I Feel Love

The one silver lining that I thought would exist with the pointless “vocals above all” obsession that k-pop fans have is that I hoped it would help get rid of music like this.  Guess not, hey.

All the dick, I assume.

It’s as interesting as it looks.

I’m glad that Koreans are starting to disregard the seasons and just write songs when they feel like it.  It’s a positive development overall.

Seoul really looks kind of dirty and disgusting doesn’t it.

Mind you it’s got nothing on Paris, a really dirty city full of scammers and thieves, ask anyone who lives there.

Just a little too smooth to actually be good.

Take your stupid dirty hip-hop hoody off before you kiss someone, you fucking grot.

Possibly the most boring video ever shot in Nugu Park.

Probably the best song this group have got.  It’s cute how they pretend that this isn’t all programmed.

Pollen – How Could I…

How could they, indeed.

Why do fuccbois hang out on the net uploading shit like this.

I generally ignore pointless remixes and different versions of exactly the same song, but I’d better put this here because I’ve been bombarded with people pointing out that this video exists ever since it came out (as if I don’t already subscribe to Rockit Girl’s YouTube channel).  I like the fact that they did this, mainly because I feel like they’re trying to directly cater to my taste, but I have to admit that the metal elements feel tacked-on and dilute the appeal of the song somewhat.  The original song already contains a really good balance between aegyo and rocking guitar, it totally didn’t need this somewhat homogenising revamp, but that black dress on the bass player looks really great so I will calmly accept.

Some pretty interesting demographic data is here, I kind of wish this video was less commentary (none at all would have been best) and less dicking around so they could have squeezed another 30 groups’ stats in, because the numbers here are worth examining.  Oh and the claims that Mamamoo have a 96% female fanbase in the comments are bullshit by the way, the source that the videomaker used for some of his data gives a much more typical demographic spread for that group.  What would really be interesting however is knowing a “baseline” male/female split and age split within k-pop listenership to compare all the individual group data to, maybe if the YouTuber thought of investigating that instead of filling the video with silly footage of fanboys that nobody asked for, this video would have been even better.  The bit about Loona is super-cringe too, so definitely be ready to roll your eyes a bit when the guy enters starry-eyed fanboy mode.