This post summarises reader’s favourite k-pop songs for 2019 and their picks for the 2019 favourite k-pop songs list and 2019 worst songs of k-pop list! What did readers like and hate the most in 2019, and what songs did they think were going to be on the Kpopalypse lists? Read on and find out!

Kpopalypse readers have many and varied taste in k-pop.  This was Kpopalypse’s readers’ favourite picks of 2019! 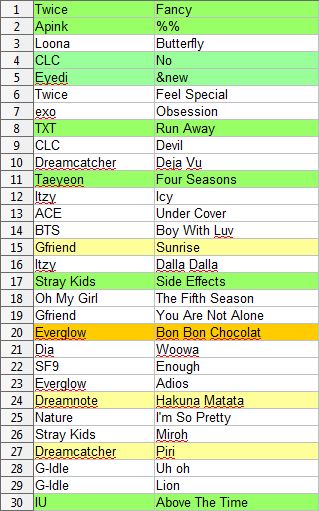 Question 2: What is your least favourite k-pop song for 2019?

Here were the k-pop songs that Kpopalypse readers liked the least:

In addition to the colours mentioned previously, red indicates a song that made it into Kpopalypse’s worst of 2019 list.  Not many readers seemed to like Stray Kids’ “Side Effects” which indicates to me that many readers need to reflect and listen to more industrial dance music.

Question 3: What song will be #1 on Kpopalypse’s favourites list for 2019?

Here readers had a shot at picking what they thought the Kpopalypse favourites list would contain.  Here are the results! 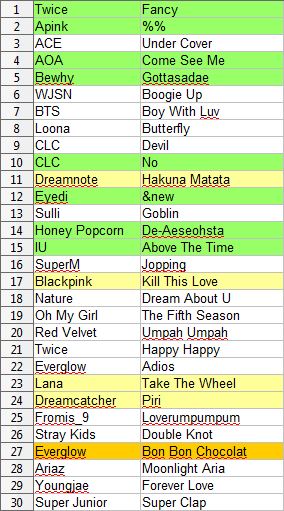 Pretty good guesses!  Of course following roundups made it easier for readers to make their selections, but there were still some surprising picks in the mix.  Only one person guessed the actual #1 of the year, which was Rockit Girl’s “Little Cat“, this reader is the lucky winner of feeling extremely smart.

How well did Kpopalypse readers do at guessing the contents of the most controversial k-pop list of the year?

Not very well, as it happens.  However to be fair, the quantity of shit music released in k-pop every year makes this list incredibly difficult to pick, so I was actually impressed that caonimas did even this well.

Question 5: What amazing k-pop track that kicked ass this year will Kpopalypse shit on for no discernable reason?

Kpopalypse’s annual worst of k-pop lists – many k-pop fans fear that their favourite songs of the year will end up here, immortalised as turds in the eyes of one irrelevant blogger.  However, how likely is this incredible tragedy to actually happen?

Actually not that likely – while five songs that you guys liked did appear on “bad” lists, three more that you thought I would hate also appeared on the positive side, and a far greater quantity appeared on no lists at all.  People seemed particularly paranoid that I’d shit on Itzy, but their fairly drab songs were no match for the competition of utter turds in 2019.

Question 6: What complete bullshit dicksucking k-pop song will be riding high on Kpopalypse’s favourites list just to annoy you?

What about the equally terrifying (to some) possibility of songs that readers thought were complete bullshit getting very positive list placements?  Let’s take a look!

Actually this fear was somewhat more founded, as it seems statistically more likely that I will like a song that readers hate, than the other way around!  So much for me being supposedly ‘edgy’, although nobody could possibly match the edginess levels of this rather enthusiastic reader:

Gosh, that’s a bit extreme there, friend!  Hopefully this person has had a good cup of tea and a lie down since writing this and has since reflected with a more mature image.

Question 7: If you have anything else to say, you could put it here if you wanted. Or if not, then don’t. Have a great Christmas and New Year, caonima!

Thanks for all your feedback!  A few people had questions, so I’ll answer them here:

All meanings of obscure terms can be found in The Kpopalypse Lexicon.

BTS don’t have much in the way of songs if you ask me, but I think they’ve been really good at marketing… or rather, their agency has been really good at directing their marketing.  Well, that’s my theory… I’m a bit mystified too actually.  It might have to remain a mystery, like the mystery of why the font suddenly changed for the first part of your response even though I copy-pasted it straight from a .csv which should contain no font data.

Australian politics is fucked and has been for ages, certainly since my writing started taking off in 2013 we’ve only ever had idiots in power.

I think this is already happening to some extent, but I don’t think it’s because anybody’s had a sudden awakening – rather, given the large focus on k-pop’s negative aspects (party thanks to yours truly) agencies are gradually being dragged kicking and screaming to implement some positive changes.

Going up to him and saying “I don’t want to go out with you anymore” probably will work.

Many of them, yes!

I don’t understand it either.  I think cookies are pretty benign these days, maybe we can thank the EU for that, but I still hate it when those warnings pop up which is why I felt the need to take the piss out of them.  Cookie warnings definitely aren’t as annoying as ads and paywalls however, both of which you’ll never find on Kpopalypse!

Whether Betsy produces more content for Kpopalypse in future is very much up to Betsy, but I would certainly welcome her writing once again plus the chance to bring more Hitomi Tanaka content onto the blog.

Write a song for a k-pop group – knowing what I do about people being shafted in the industry?  Not a chance.  Would be more interested in interviewing Jaden, he should hit me up.

It isn’t, that’s just the effect of nostalgia.  People tend to remember the good and forget the bad, however the new bad stuff stays fresher in the mind.  Also yeah I fucked your space bar suck shit

You seem to be getting pressure in both directions here, and you spend a lot of time talking about other people’s perceptions of you – but nowhere here do you really take a step back and think about what YOU really want.  I think that’s far more important than offending/pleasing the feelings of family, friends, enemies or whoever.  So have a think about that for a while, and then once you know where your head is at, proceed as your head and heart dictates, screw what other people think.  Your life is your own to live the way you want, no matter what others think, don’t spend it being a slave to the perceptions of others. 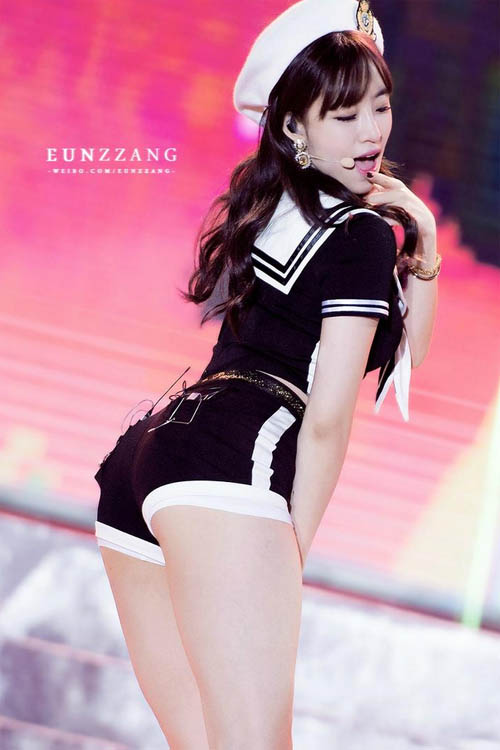 This probably isn’t the picture you’re thinking of because it was literally the first thing I got out of an “Eunjung ass” Google image search, but I think it’s pretty good quality so it’ll do.

To finish off, here’s some more random responses from readers, presented without comment.  I’m glad that you all enjoyed 2019’s content, and there will be more coming your way soon in 2020!

Thanks for all your feedback, and know that even if yours isn’t featured here, I do read absolutely everything readers send!  Kpopalypse will return with more posts soon!  Stay safe, caonimas!

5 thoughts on “Results of the Kpopalypse 2019 end-of-year list survey!”