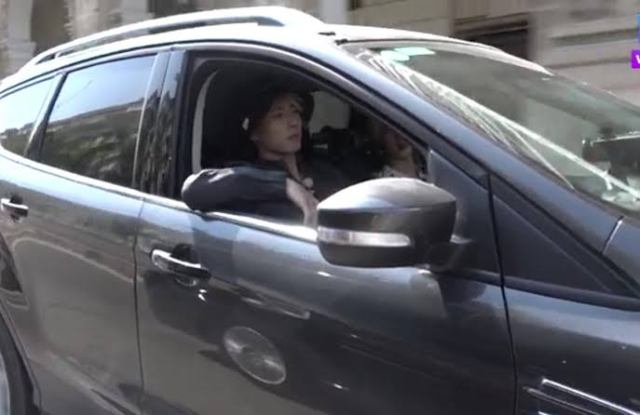 Actually really musically hideous, just Blackpink’s awful “Whistle” with a little less yolo.  At least the cinematography is great, Hyuna’s looking better than she has in years.

Hyuna’s other half has a song that is maybe slightly better but unfortunately really boring anyway.

Got7 – You Calling My Name

Actually I wasn’t calling your name, I was saying “Got 5 Demands“.  Maybe it just sounded like your group name.  I apologise.

There’s some nice chord progressions here that really belong in a T-ara ballad, pity the absolutely awful typical boy-group vocal melody-writing everywhere except the chorus kinda ruins a fair chunk of this.

Nothing much of note is happening here.

I don’t really care about the song which is just a bunch of mediocre yelling really, but I do want to know if a Korean cosplaying as a black guy who transformed into a white guy is “blackface” or not.  Is dressing up as Michael Jackson “Thriller” era considered more blackface than “Dangerous” era?  Can a leader from the Woke Council please get in touch.

That guy facepalming at the start looks how I feel.

At least it’s upbeat which is welcome in the sea of boredom this week, but unfortunately that’s not enough to get it over the line.

Another song with some cool sounds in the background but no actual vocal writing.

Hey which one’s Eric?  I need to know who to give my lunch money to.

It’s actually pretty good.  I don’t think Amber’s the best writer of her own vocal lines, but the backings are enough to save it.

Primary’s production smarts aren’t enough to breathe any life into this morose dirge.

People were asking me on my livestream to listen to this but I resisted, figuring it’d be awful and a waste of everyone’s time.  I made the right decision.

Were you thinking just now that you needed another Zion T. acoustic R&B number in your life?  Guess what, me neither.

Zico raps over some boring song while a lady thinks about her regret of how she wasted her youth listening to boy band solos.

Okay this gets over the line for inclusion because it’s more than just lyrics scrolling past on a page of stuff, but really it still wasn’t worth the effort anyway.

Really, why abbreviate “Joseph” as “J.seph”, you’re not actually saving yourself any typing there.

Vincent – Burn It All

Actually pretty cool just because of the way the song progresses unexpectedly.

The usual awful R&B that there’s a dozen songs of each and every week.

Kolavo – I Wish Tomorrow Were The Weekend

They almost hold hands but then they don’t.  Gosh that got a bit raunchy there.

The song isn’t intolerable for this kind of thing, and wow they really made Punch look good.  Maybe I should fly over to Korea and try and ask around at places where she normally eats or hangs out and get someone to pass a note to her or something.  I’ve heard that’s how it’s done can anyone confirm.

Not much of a rap really, however the salvo at commercial rappers is appreciated.  Wow that must be all Korean underground dudes rap about.

Skinny Chase sounds better on this track, and the beat is better too.

What a weird and dull song.  Why do the drums sound like they were recorded underwater.

Peace Jeong – We Are The Stone

Look at these ugly sweaty motherfucks, definitely not coming to a TV show near you.  The song isn’t amazing but I sure do appreciate some ROCK for once.

On the other hand this is dreadful because the groove is annoyingly blues-based and the singer basically mumbles through it like he doesn’t care, which is pretty much how I feel too.

More rock, this time instrumental.  A shame really as this song actually sounds like it needs a singer over the top.

If you like to watch girls brush their teeth and look miserable boy do I have a video for you.

And here’s the male version!  Boys can brush their teeth and look miserable too!  Equality yay!

Dude has a Coldplay shirt on, so you know that keeping expectations here low is wise.

Like a lot of songs this week, it’s not too bad but is about 57 minutes of building up 5 seconds of song.

How do people this shy ever get laid.  No wonder Korea is having birthrate issues.

Yes this is a boring ballad.

See, your BTS oppars aren’t that special.  Any old idiot can write a song about loving themselves.  However before you take on board that message and start loving yourself a whole lot, you may just want to check first that you’re actually not a cunt.

I’ve seen one of the first prototype CD players from the 1980s and it looks a bit like what this guy is using.  Sad when CD is starting to become retro.

This sounds exactly how you think it will.

You’d think at least the “indie channel” people would know how to use a Shure Super 55 but no.

The boring R&B rappers are all wearing high-vis now so if you’re driving along causing carnage like Jungkook you can see them clearly at night and aim at them for extra points.

Look at these sweater-wearing fools.

This song has certainly invaded my safe space, it should come with a trigger warning that it sucks.

Wow they really broke the budget with this MBK-tier drama video.  Check it out.  Note that this video is made up of the “ballad version” of the song at the start, and the “original version” at about 4 minutes in.

Girls’ Generation’s Taeyeon experiences the annoyance that we all feel in PUBG when we kill someone at the start of the game, check their lootbox and find out that they don’t even have a weapon yet.  Come on PUBG corp, you could have at least given her a glock or something, even 080-SONE-AWAY thought of that.