There’s several version of IU’s “Peach” kicking around, but the one that I’ve done a cover of is the “live in Venice” version.

I chose this version because it’s pretty much just the bare bones of the song, which is exactly what you want when learning.  From here it’s easily possible to improvise with it and stretch everything out more if you feel like it, but I’ve played this one straight down the line, much as IU does.

The main riff is this:

I’m not playing the picking pattern here very strictly, but then, neither is IU, who deliberately drops up to 50% of the notes out of it at any given moment, to give it that “being lazy by the river” kind of feel.  The “h” is for the hammer-on, which isn’t actually plucked with the picking hand.  Note that sometimes IU will move the hammer-on to behind the first beat, so the riff is like this instead:

That’s the most basic improvisational variation that you can do with it apart from dropping things out, but there are plenty of others.  I’ve seen her live drop in various things like this:

As long as the two chords are there in their basic form, and the distinctive hammer-on is there, and it’s played in the right feel, that’s all that matters.  Note that the Dmaj9 is missing the 3rd, so the maj9 (E) is kind of “implied” because of the maj7 (F#) being present.

There’s a turnaround section which drops in, this is from 0:40 in both videos: 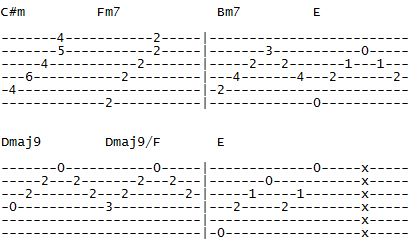 The column of x is just striking the strings lightly with her hand, which is a common technique for this kind of song.  This is the only place in the song where IU does this.

That’s basically all the guitar involves, everything else just mixes and matches the above elements.  The structure for the rest of it, is mainly a combination of the original riff, and the second bar of the turnaround (Bm7 to E).  Sometimes IU throws in a extra E at the end of the sustained Amaj7 that finishes off each cluster of vocals, sometimes she doesn’t.  The last chord in the song is just the Amaj7 again.

The guitar I’m using is the Crafter KGAE-27 Premium, which is one that IU has been known to play from time to time.  It’s the “market-model” IU guitar, so it’s different to the one-of-a-kind Crafter guitar in her video that was made especially for IU and has her name on the guitar neck, but minus that detail it’s essentially identical.  I’m happier with my version anyway as I don’t think I’d want someone else’s name on my guitar in big-ass letters.  The instrument is being recorded with an Audio-Technica condensor mic that’s not in the frame of my video and about half a meter away from it, on the desk in front of the camera.  As you can hear, this guitar doesn’t need any close-micing to sound bright, even though my touch on the strings for this cover is very light, the sound really jumps out of it!  It’s easily as well-built as the equivalent type of guitars that you’d find in brands such as Martin, Taylor, Maton etc, and costs a hell of a lot less money.  Asian guitars often get a bad rap from guitar purists but those people can go fuck themselves because the Korean-made Crafter guitar both looks and sounds as good as anything else.  I ordered this from Hitchhiker Music in Busan and it arrived in less than two weeks, I highly recommend them and no they’re not paying me to write this.  Anyway thanks for reading, thanks very much to all the people who are supporting Kpopalypse on Patreon as you all helped make this video possible, and here’s a clip of IU playing a different song with the KGAE-27.

I’ll definitely be recording more covers with this guitar in the future!  In the meantime, Kpopalypse will return with more posts soon!