Sulli’s death is a big thing in the news right now.  Tragic, right?  Of course we’re all very upset about this horrible incident, me included.  Having lost several friends and even a partner to suicide, the issue is quite close to my heart.  However finding exactly the right thing to write about someone’s suicide on a k-pop website is hard.  Kpopalypse is here to give website owners a hand so they can maximise their heartfelt and entirely appropriate feelings of mourning during this awful time. 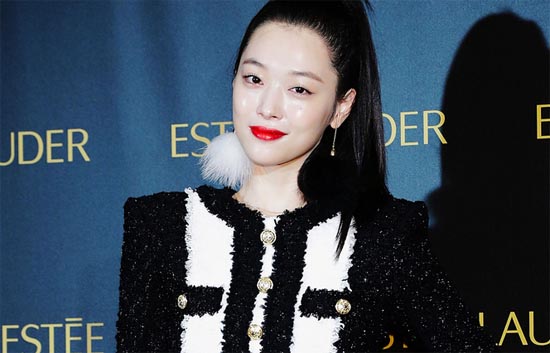 Look at this picture of Sulli.  One image is worth a thousand clicks.

Firstly, here’s an example of how NOT to do it.

Here’s the header of an article on truthful k-pop news journalism site Asian Junkie.  It’s quite respectful and straightforward, and very trufaxual – but it’s also rather plain and isn’t liable to generate the needed sense of sincere and sorrowful mourning required.  Also, most importantly, there’s only just one of these articles on Asian Junkie, which isn’t enough really.  If you want to show everyone just how much you care , you need to write several articles, in fact the more the better.  More articles means that you care more.

Koreaboo a.k.a “The Buzzfeed Of K-pop” obviously care way more about feelings than Asian Junkie, he certainly could learn a lot from Koreaboo, and probably so could you.  Let’s take a look at how Koreaboo has been maximising their opportunities for reflection .

First, be sure to post a “teaser” article before any hard information is actually confirmed.  K-pop fans sure love their teasers!

You better believe it.

While waiting for confirmation and an official statement – why not a second teaser for good measure?  The “teaser cycle” of k-pop comebacks has been getting longer and longer these days, so why not with k-pop news articles too?

Eventually you’ll have to come clean with the full-length feature though.

Don’t forget the B-sides!  This article contains the newsworthy revelation that just before Sulli died, she was alive.

Are you upset that Sulli is now dead?  So is another person.

This person is also upset.

It’s almost like a whole bunch of people in Korean entertainment, and their fans, are all really upset about this.  Make sure that you’re there to tell people this news with helpful and informative articles.  You can spread this crucial information out over as many articles as you like!

Even if someone has left a grieving message and you’ve already covered it with an article, if that same person then leaves a second message, you can now write a whole new fresh article!  Remember each new article about a celebrity in mourning helps greatly with the healing process!

Remember also that each new statement from companies or the authorities is worth one article.

The above article is about how there was a memo at the scene of the death and the contents of that memo are totally nobody’s fucking business.  The lesson here is that even police telling nosy journalists to fuck off and stop milking the tragic situation for information to make articles out of, is still worthy of an article.

Here’s another article where the statement is “mind your own fucking business”.  Can’t get that private information?  Doesn’t matter – article time!

Of course if some ratbag journalist on a quest for high-clickrate article content leaks that private information, you can write about that, too!  Of course, don’t actually share the private information – that would be immoral – just tell people it’s out there so they can go looking for themselves.

If celebrities want to attend grieving events, be sure to cover this too!  One celebrity going somewhere to mourn = one article.

Sulli apparently planned to do something before she died, but didn’t.  That’s worth an article.

The reaction of the people that doing the thing would have affected is also worth an article.

Unlike Sulli, Taeyeon hasn’t killed herself.  What a relief!  Stay strong, Taeyeon!  Better write an article, just in case.

Since we’ve learned absolutely nothing from Sulli’s death, we still haven’t learned to completely ignore what random idiots say on the Internet.  That’s a shame – but it’s also article-worthy.

There’s no limit to the amount of articles you can make about “malicious comments”, as there’s thousands of them per day.  There’s so much important human interest in it, that some entire sites, that’s all they do!

In fact “malicious comments” are so popular now, that you can even run a whole TV show with them!  That is, assuming your host doesn’t suicide in complete despair.

If someone says something really hurtful and irresponsible, just ignore it because they’re idiots…. just kidding!  Instead, make an article highlighting the situation and give the hate comment and any reaction as much international exposure as possible.

Oh and here’s the public memorial details so you can express your condolences, just in case expressing them through reading Koreaboo isn’t working out for you.  Not sure why that would be.

Oh look, the hate comment show that Sulli was hosting decided to stop producing content out of respect for Sulli.  Wait, did someone say “producing content” and “Sulli” in the same sentence?

Don’t you want to know all about what the police find when they dissect Sulli’s corpse?  You can write one article when the police ask for an autopsy…

…and a third article when the results come in!  Spoiler alert: it was a suicide.

Oh and speaking of revelations, did you know that before Sulli committed suicide, she was sad?  Thanks Koreaboo for this helpful article.

However even though Koreaboo have so far milked 20 articles per day about Sulli’s death, they don’t want YOU to get too sad while reading.  That’s why they have this self-harm prevention text shoehorned at the bottom of every Sulli-related article, complete with an American phone number because as we all know, all k-pop fans live in America.  Make sure you get some help and talk to people if you’re feeling down.  Hopefully this post’s dark humour hasn’t gotten you too depressed about the state of the world, hopefully certain websites will reflect and return with a more mature image next time there’s a tragedy like this, and Kpopalypse will return with more posts soon!