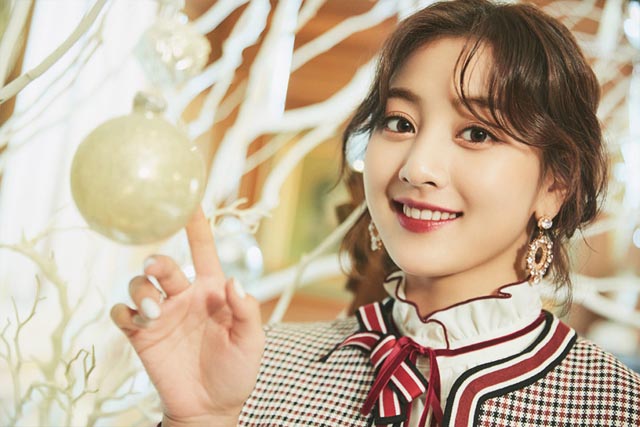 Twice’s Jihyo is pictured here, touching some dangling balls.  She seems happy about it – don’t judge a woman’s choices.

It’s not very often that Oh My Girl do something which is just kind of average with nothing all that unusual (good or bad) about it, but here it is.

Some cool synths and sub-bass do their best to save a desperately unspectacular song.

On the other hand, IN2IT’s song actually rocks.  The heavy metal intro is startling, and while it doesn’t unfortunately keep that up, the backbone of the song still has better harmony choices than this type of thing usually has, the more I listen to this the more I like it.

Everyone was very excited to let me know about Rocket Punch’s debut, and like almost always when a girl group debut generates a lot of excitement, the song has nothing notable about it whatsoever.

If you were hoping for another amazingly cool song after Fanatics-Flavor’s great “Milkshake“, sorry but this song is just that boring shit everybody is doing now.

It’s actually good, but takes about a minute to reveal itself.  Stick with it.

Dynamic Duo are riding solely on their rep these days.  This R&B crap could have been made by anybody.

This song can fucxy off.

This is a little better than this week’s other “traps” just because it’s less melodic and goes harder but that’s still no excuse for the absence of a proper beat.

First Eunjung and now Pink Fantasy, I totally support this Dreamcatcher influence spreading throughout k-pop.  Also finally the creepy-looking Donnie Darko bunny actually has a song that suits it.

Before there was Jihyo, Soyou from Sistar was one of the reigning champions of k-pop bustiness, even though her groupmate Hyolyn got all the shine because people can’t tell the difference between natural volume and push-up.  Sistar are gone now but it’s nice that we get a bullshit tropical comeback every so often so we can see her in summer dresses and shit.

I saw a comment that said “giving me major AOMG crew vibes” and yep, that’s exactly what’s wrong with it.

Speaking of which here’s some bullshit by Jay Park and friends, where they all rap over a different beat.  Of course Jay Park having no taste chooses the worst beat of the lot, not than any of the rest of it is much good either, but the variety of moving between different types of insulting musical garbage is nice I suppose.

If trot groups are going to contain hot MILFs who throw back to Orange Caramel’s “Lipstick” era then I calmly accept this.

Can I take a time machine back to when rap didn’t sound like this.

Yodayoung looks a bit like AOA’s Jimin back when Jimin used to wear clothes and didn’t look like Skeletor.

No I really try not to.

87dance – Without Get Drink

Shit like this usually isn’t even notable enough to get in the roundup at all.  Contrary to popular belief the roundup isn’t supposed to be “complete”, that’s impossible.  I’ll put it here anyway even though nobody is going to listen to this or give it a second thought.  Even this group’s parents probably just leave their first-press copy of this single on the mantle and don’t actually play it.

It’s almost good, but then that chorus comes in and it’s just fucking nope.

Starts off sounding a bit like Blackpink’s “Boombayah” and then the chorus comes in and puts the fucking brakes on everything for no reason.

More bullshit that just isn’t needed in your life.

It’s different, but different doesn’t always mean good.  Also why does it look like it was shot in one of the little buildings in Sanhok’s Boot Camp.

Is this the same dude?  Maybe I was unfairly harsh on the other song because this one sucks balls.

Imagine if this video came out the day after the Ladies Code accident, everybody would be horrified.  Of course it’s five years later and a bunch of people around the world probably died on the road over the last 24 hours but it was nobody that k-pop stan Twitter cares about so nobody gives a fuck.

This guy sensibly worked out that people would rather see f(x)’s Luna singing this crap than him, full marks for self-awareness.

I guess 1670 is the last year that people actually gave a fuck about music like this.

It’s not that good but given how bad rap generally is lately it’s still in like the top 5% of rap songs made so far this year.

No thanks hands off k.

Speaking of unwanted physical contact, Kim Hyun Joong is back with all the classy-sexy romance you crave.

Eyedi has some great songs, but this isn’t one of them.

Dreamcatcher – I Miss You

Meanwhile Dreamcatcher have a new song which isn’t even as good as the groups they are inspiring lately.  The ultra-cheesy chorus (which really is j-pop style, and quite unlike most of their other material) pretty much murders anything else worth listening to here.

Not that I really give a fuck about sales and shit, but it’s kind of interesting to see how popular fan perception of artist sales success completely differs from reality.  Imagine a world where BTS only outsold EXO for the first time ever a few months ago, Twice only caught up to SNSD’s sales at the start of 2019 and where T-ara moved into the #2 female k-pop spot behind SNSD only after the scandal in 2012 that supposedly “destroyed their careers”.  Well, you’re living in that world.  It’s amazing how wrong most people’s “hot takes” are when you look at actual data as opposed to what people are peer-pressuring each other into saying on social networking.  Also as an extra bonus why not have separate charts for boy and girl groups only, because I know you want them:

And some charts which show YouTube performance of boy and girl groups from around the world:

In the meantime why not ask a question to Chris P. from Korean Indie?  You can do so at this link!

Also just a quick heads up for radio listeners that next week’s radio show is the annual Radiothon show!  Stay safe caonimas!