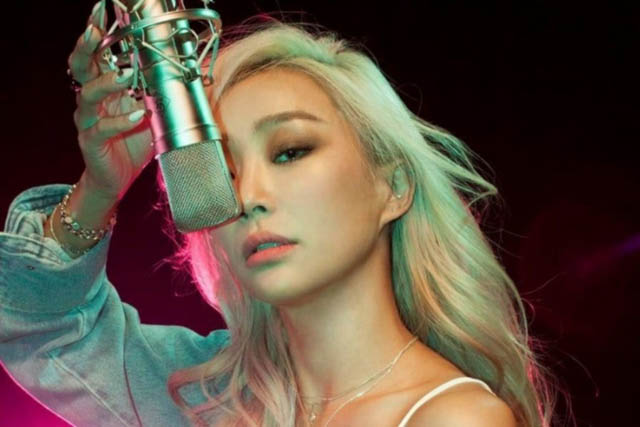 I had a snarky comment all prepared for this caption but Hyolyn says that she wants to meet me to discuss it, so now I’m not sure if I should write anything. She might whack me in the face with that microphone if I give her a hard time about shitty tattoos or whatever.

A neat rhythmic twist in the chorus isn’t quite enough to make this song work.  Of course people will like it for the lyrics anyway but if you actually care about music there’s not a lot going on here that actually fits together.

Incredibly, Tiffany manages to out-Tiffany her own notorious monologues with one of the cringiest spoken song intros of all time.  Tiffany’s hair styling in the intro is the only winner here.

Seemingly a song about Lee Hi being abducted by furries, I guess that explains what happened to her all this time.

Keeping the tempo going throughout instead of dropping down to half-time constantly would have helped improve this song a lot.  Still, the guitar riff kind of saves it anyway.

After an odd run of uncharacteristically great ballads over the last couple years, finally Yoona has a bullshit song which is just as boring to listen to as she is to look at.

Absolutely laughably bad.  It’s a terrifying thought that somewhere in the world, somebody is taking this seriously.

Pure trash.  I feel sorry for Red Velvet stans who might feel morally obliged to like this garbage so they don’t offend their peer group.  It must be tough being part of a fandom.

It’s alright, but the weird rhythmic pulse does it no favours, and it all ends up sounding a bit wishy-washy.  Aseul has done better.

Kinda cool how she found the only active record store in Korea to shoot this in.

It’s not too bad I suppose but it’s not worth crunching your D over.

The weird thing with eyes looks exactly like the weird painting in Alternative DiMansion Diary, which pretty much kills any small amount of sincerity in this “sensitive rap” garbage stone dead.  Rappers please go hard or just shut the fuck up, nobody wants to hear you get in touch with your inner repressed normal person.

It’s that bullshit sound everyone was doing last year.  Forgettable.

A better “sentimental breakup song” than most, but it’s still puerile garbage that nobody is going to like except one-eyed fans of this group who would like anything they do just because their name is on it.

Cool sounds but the songwriting just isn’t quite there.

Woman Who Should Do Kpopalypse Interview #5723 writes a song for her birthday and it’s like getting new coat hangers when you already have too many.

The cat is certainly happier than I am.

These dogs got an even worse song.

Root – What I Want To Say

There’s something about yellow chains that just dulls the seriousness of the image they’re going for here.  Yellow chains made of plastic are what you surround a children’s sandpit with so the kids don’t kick the sand everywhere.

Just when you think you’re going to get a chorus, you get some weird half-time drop thing, and that really annoying synth line doesn’t help.  This is definitely one for when your speakers don’t work.

My reviews are definitely biased, but they’re only biased because so much music is just shit now, which means that they’re not really biased at all.

This is like those slow boring BigBang songs that you’d always skip on the album.

If you’re searching for a reason to not attempt suicide this week, here you go.  Listen to this a bunch of times, it’s fucking cool and I like how the melody just keeps going up, and up, really clever use of harmony in this song.  Also great guitar selection, everyone should own a “Prince” guitar and an Avril Lavigne Telecaster.

Yoyomi – A Road In My Dream

Yoyomi dresses like your grandmother when she was a 20 year old uni student, which automatically makes this great.  Did you know Yoyomi has released NINE singles and a full length album over the last 10 months?  Now that’s determination!  Now what’s your excuse for being a slackass?

Never mind the content of the interview which definitely isn’t as “deep” as hyped, it’s just interesting to me to hear all the Blackpink accents.  Most Koreans obviously speak English in an American accent because it’s Americans who are teaching them and spreading their (filthy, incorrect) ways of pronouncing words, so it’s nice when I hear a group that isn’t like that, and Blackpink meets required “not sounding completely like Americans” standards.  Jennie’s and Rose’s accents are definitely converging, with Rose picking up the odd American style pronunciation lately, and recent Jennie interviews have her adding a lot more Australian inflections into her speech, and even Lisa’s starting to catch a little bit of the Australian style.  I guess this is what happens when you share the same living space and work environment for years on end.  When I see Rose in two weeks I’m going to ask if she wants any durries from the servo or just Maccas and a goon sack from the bottle-o.  She’ll be stoked, I’m sure.

That’s all for this week – Kpopalypse returns next week with more roundup!