There’s a joke here somewhere about (G)I-dle Soyeon’s computer piracy and this ice cream, I’ll probably think of it two days after I hit “publish” on this post.

Despite the song title, it’s actually not that horrible Latin sound we were all fearing.  However that doesn’t mean it’s any good, either.

The definitive version of “I Only Wanna Be With You” will always be the Samantha Fox version, at least until Anri Okita adds it to her repertoire.  Sorry, Shindong – don’t take it badly.  You look great, and I’ll always love you – as a friend.

Is it as good as “Marry Man“?  Are Pink Fantasy really their backup dancers?  Is that really the Donnie Darko girl from Pink Fantasy on the guitar?  Is dressing up as late-80s Michael Jackson still technically considered “blackface” by Asian Junkie?  So many questions!

Kang Min Kyung – Because I Love You

Hey check out this tweet after I responded to Roy Kim’s request to do a survey:

I was very happy to help out Roy, but his fans were less than happy to hear from me.  Some fans chimed in with claim that k-pop was majority upbeat songs.  This is an interesting claim, but is it true? 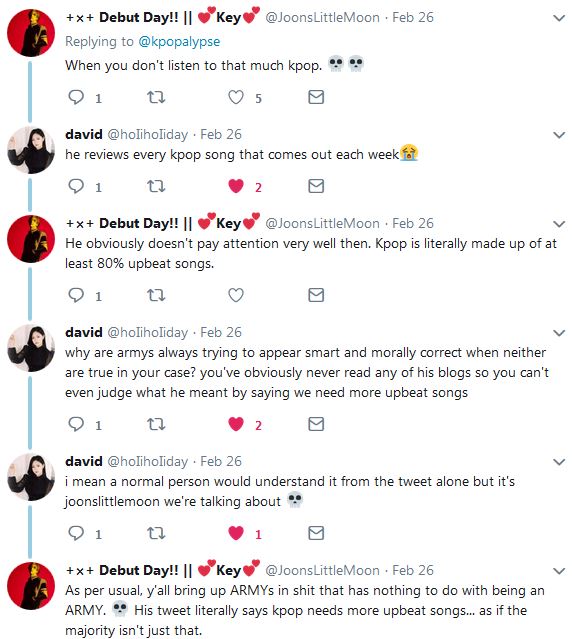 Rather than speculate and pretend that I know everything without checking facts, let’s investigate the trufax and count up the ballads from this week compared to the upbeat songs.  Boring ballad #1 is this turgid slop from the admittedly very pretty Kang Min Kyung of Davichi which actually isn’t that terrible as far as these things go but it’s not exactly fucking Slayer so it can still get fucked.  That’s 5 songs reviewed so far and 1 ballad, so in other words 80% upbeat songs.  Gosh our Tweeters are right so far, as we move down this list, will they continue to be?

Boyfriend – Stay The Way You Are

I actually expected a ballad here but actually it’s alright, for the three Boyfriend fangirls left I guess you’ll probably be into this.  Hey and they play table soccer good.

I love it when they try to convince us how rich they are.  You’re a cut-price CL, just relax with the photocopied money and stuff.

It sucks how so few artists in k-pop have a “core sound”, it means that you get a group like Jerastar who does a great song like “The Dream In Dreams” and then you never get to hear anything like that again from them, ever.

Juniel is now fucking unrecognisable, not that she didn’t look like a robot before, but now she looks like a completely different one to the one I ordered online.  Anyway this dull shit is boring ballad #2 so 2 songs out of 9, or 78% upbeat songs.

Some nice harmonies and cool instrumental choices propel what could have been boring ballad #3 into some worthwhile territory.  We’ll give this one a reluctant pass.

It’s neat how he does a bunch of the dance routine between two different-coloured toilet blocks.  Conceptually I guess it makes sense to stick to what you know.  Notice that the toilet blocks are indeed very small, I’m pretty sure it would be impossible to rape anyone in a toilet block of that size, I mean there just wouldn’t be enough room, right?   Good looking out for safety on the film set, Yoochun!

Hong Joo Chan – A Song For Me

Korea never does this 80s style power-ballad correctly, because they add too much detail and wank into a style that benefits from straightforwardness.  Needless to say this is boring ballad #3, we’re at 3 ballads out of 12, so 75% upbeat songs so far.

I certainly feel like he’s giving us the bird.

Here’s some awful trap bullshit with a vague R&B piano feel over the top, but don’t worry it still sucks.

It’s some mid-paced ballad bullshit.  Snore.  5 songs out of 16 are ballads so our upbeat song ratio has now dropped to about 69%.

Here’s some nugu DJ with a song about an orange with a random exclamation mark so you know it’s kinda peppy.  Mind you Oh!nle sure wasn’t so I dunno how good an indicator that really is.

This ballad has nice sounds but is just a bit too wandering off into the rubato woods for its own good.  6 out of 18, 66% upbeat songs.

When it starts off with some guy with unkempt hair wistfully staring into a field of grass, you know what you’re in for.  7 out of 19, that’s roughly 64% upbeat songs this week.

The tempo drags enough for this to qualify as slow boring bullshit nobody cares about.  8 out of 20, we’re down to 60%.

Kwon Jin Ah – Tell Me About Your Day

Holy shit this is fucking MOSHING, get ready to go crazy in the pit motherfuckers.  Just kidding.  10 out of 22.

I’m glad he’s fine because I’m not.  11 out of 23 – uh oh, the ballads are almost starting to overtake the actual music!

R&B-lite ballads are still ballads.  12 out of 24, that’s only 50% upbeat songs this week.  Gosh, it’s almost as if the people who say that k-pop is 80% upbeat are completely full of shit and don’t know what they’re talking about, wow imagine that.

A Train To Autumn – Farewell Again

Oh and this group are some ballad unit from some k-pop idol label that they don’t promote because they know nobody cares.  I guess it makes good sense to keep a group like this on the books to do all those boring OSTs.  We’re at 13 out of 25.

Holy dickballs it’s a Christmas song, in March!  How incredibly depressing.  Oh and it’s a ballad.  14/26.

In my school days “quad” was an insult because it meant “quadraplegic”.  That fact is still not as problematic as the fact that this is ballad 15 out of 27 songs this week.

16 out of 28.  43% non-ballads, 57% ballads.  Just another week in k-pop, unfortunately.  That’s before I add the stupid OST’s which are always boring ballad crap and would no doubt push the figure up to around 70% ballads, but I’ll spare you those out of the goodness of my heart.  And yeah I held back a few upbeat songs (like Jus2 – next week folks) but I held back a few shit last-minute ballads too.  Anyway as you can see I’m certainly not making this shit up for fun, and it seems like certain people on Twitter now owe me an apology.

Henry, “Roy Kim’s sister is my ideal type” (Happy Together)

Please don’t interpret this all as a Roy Kim bashing session, however.  Roy Kim’s alright.  Not only does he have to put up with annoying bloggers writing about how much Korean pop ballads suck, he even has Super Junior M’s Henry creeping onto his sister!  The poor girl had better be careful because I’ve heard that Henry is really into C O S P L A Y.

That’s all for this week – roundup will return next week!