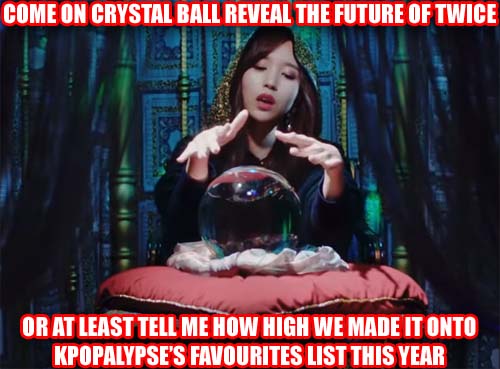 Before we delve into the destiny of 2019, let’s take a look at 2018 – at around this time last year I made a lot of bold (and a few not-so-bold) predictions.  How well did Kpopalypse do?

After School finally fucking come back – INCORRECT.  Not only can Pledis not bring back After School, they can’t even get the full Pristin lineup back together.  However, E-Young is in a band now and is playing shows, so that’s probably what my powers were telling me instead.  Seems legit.

Crazy shots are fired in the BTS/EXO fanwar – CORRECT.  Here’s an example, here’s another, and I’m sure you can find your own.  Shit between EXO-L’s and Army’s is starting to look more and more like the Syrian conflict each week.

Twice become the new Girls’ Generation – CORRECT.  Some caonimas pointed out that this had pretty much already happened by the time I made this prediction, but hey, they could have had a career-sabotaging controversy that fucked them and there wasn’t, so I’m still taking credit for predicting this.

BTS actually crack the US market… somewhat – CORRECT.  Not only did they do well on the US charts, but they also made significant inroads into the UK and many other western markets.  As predicted, it wasn’t a huge globe-sweeping PSY-style fad, but just a consolidation of previous success.

China opens up to k-pop again – CORRECT.  China hasn’t made a fuss about it but has just sort of quietly chilled out a bit, to the point where articles like this one don’t seem as silly as they would have if they were written two years ago.

Another k-pop star consents to Kpopalypse Interview – CORRECT.  The k-pop star was of course the fantastic UZA and you can read her interview with Kpopalypse here.  Although if UZA doesn’t meet required standards of stardom due to being too cool and “indie” for your trend-riding, conformist ass, remember that k-pop viral social media celebrity AustralianSana has consented to not just one Kpopalypse interview but an entire series!

K-pop fans en masse gradually realise Shampoobuzz is kind of a bullshit site for fuckwits – CORRECT.  Unfortunately, people do still continue to visit the site, so therefore Snakebuzz has also earned herself a Kpopalypse boycott until she reflects and returns with a more mature image.

My k-pop hating girlfriend will actually find a k-pop video that she likes – CORRECT.  She really liked my cat’s appearance in Longguo’s “Friday Night“.

Classy-sexiness returns to k-pop videos – CORRECT.  In 2018 Honey Popcorn stepped up with their k-pop debut, which wasn’t all that classy-sexy, but it didn’t matter because all three girls then quickly returned to their existing extremely lucrative careers full of classy–sexiness galore to pay for that next showcase.  And let’s not forget Twice who proved themselves to be Gain-in-reverse.

Meanwhile, some powerful people in k-pop get busted in real life for getting too classy-sexy – CORRECT, and I was also correct about them being handed absolutely no consequences of worth, because that’s how Korea rolls.

KARD finally have a feature track that isn’t tropical shithouse – INCORRECT.  I was hoping for a self-fulfilling prophecy here but I guess you can’t win ’em all.

Peak tropical shithouse is reached, and gradually declines – CORRECT.  After a frenzied peak about 6-12 months ago, k-pop groups are gradually starting to learn how to do new songs without that fucking marimba noise and the echoey yelling squirt thing.

More k-pop artists say and do “problematic” things – CORRECT.  Followers of k-pop’s home of problematic tally-keeping Asian Junkie will know that idols kept committing thought crimes in 2018, most recently San E who should definitely have considered staying in the JYP dungeon for a few more years.

YG finally lets Blackpink do more than one song per year again – CORRECT.  Not only did we get “Ddu-du Ddu-du“, but we also got stages for “Forever Young” in 2018 plus YG even let Jennie out of the cage a third time to do a “Solo“.

Han Seo Hee debuts with one of the best songs in 2018 – INCORRECT.  Not only did she not make any music, she didn’t even want to be a feminism anymore.  Feminist k-pop fans will have to settle for Yua Mikami and ex-Wonder Girls’ Sohee to meet their feminist content needs.

Kpopalypse continues to annoy the fuck out of everyone in 2018 – CORRECT.  The haters really stepped it up in 2018, directing more juicy web-traffic to Kpopalypse than ever before!  The latest Kpopalypse hate-meme that’s generating all the increased views to my site has several variations but generally goes something like this:

“Australian” and “perv”, guilty as charged, and proud of it (well, the perving anyway – no true Australian is actually proud to be Australian)!  However I pity the poor fools who come to my site to see my supposed “lust after teenage girls” and end up reading about me drooling over Puer Kim and ex-Eat Your Kimchi’s Martina instead.  I wish Martina didn’t go to Japan so I had more excuses to link her videos, like this one where she looks great in a business shirt, she’s way hotter than all the maids in this maid cafe video, and holy shit check out these pancakes (also good luck Martina battling chronic depression, that shit sucks balls I had it for years).  The reason why every post is categorised “your mum” is because I actually would sooner fuck your mum than some k-popper, in fact your mum probably subscribes to my blog and is about to come into your room and borrow the towel because I forgot to throw her one.

Anyway, as usual I got my predictions mostly right thanks to the power of Boram, eat shit James Randi!  Now let’s take a look at what 2019 has in store, and remember that these predictions are definitely mostly correct, except for the ones that might not be, because I’m only Boram’s son, not Boram herself. 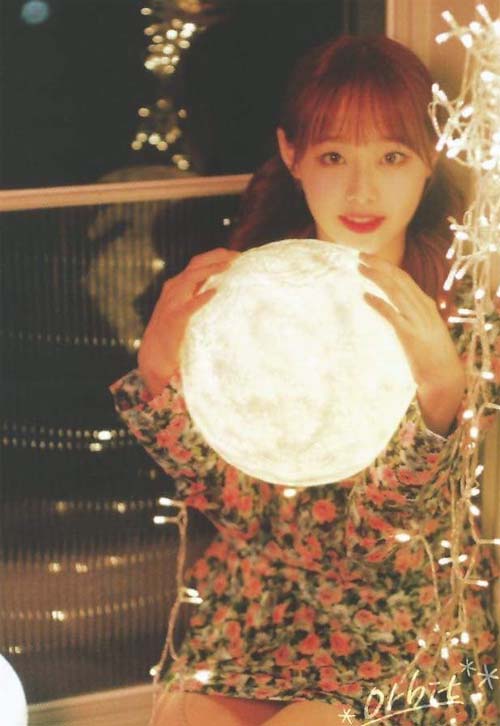 Kpop begins a quality resurgence (but only briefly) – over the next six months some great tracks will be produced as many people decide they have done enough token tropical shithouse songs and don’t want to touch the style anymore.  Then it all falls apart mid-year when a completely fucking stupid new trend emerges and turns everything to shit (again).

Twice continue with success but also have their craziest controversy yet – if you think Tzuyugate was extreme, just wait.

Blackpink make some inroads into western markets that 2NE1 never did – much to the ambivalence of ex-2NE1 members.

BTS’s continual rise forces more reluctant western engagement with k-pop than ever – be prepared for k-pop to gradually morph from a cult subgenre into a popular subgenre, with accompanying backlash.

IU gets realer than ever before – she’s already pretty high on the realness scale for a k-idol, but hold onto your nuts, because it’s about to go down.

Nine Muses don’t give a fuck anymore – and why should they.  They will show evidence in 2019 of exactly how few fucks they give.

The sexy comes back to k-pop – watch someone try it full-tilt in the coming year, with mixed commercial results but a media shitstorm that makes it all worthwhile anyway.

San E rethinks rap – after kind of fucking his career as a rapper by not knowing how to write a diss rap correctly, San E changes direction.

Loona do well – Koreans remain ambivalent about Loona, until a high-profile international incident makes Koreans embrace them so they can “look good” to the world and pretend that they stanned all along.

Pristin don’t do much – watch Pledis try to distract you with subunits, solos and just about anything else so you stop asking what happened to the full group.

The Great Satan of k-pop websites tries something else – after a failed experiment at trying to be Reddit/kpop continues to not pan out for him, Johnny Noh does something that you wouldn’t expect from anyone sensible, but that you might well expect from Johnny.  Hint: he’s a Trumpist.

More readers grateful that Kpopalypse doesn’t have ads or a paywall (unlike many other inferior k-pop sites) decide to donate to the Kpopalypse Patreon – out of the goodness of their hearts, or perhaps just to get myself to the $40 goal level so they can find out what I have in store for Asian Junkie.

Asian Junkie flips his bean – continual sustained trolling by Kpopalypse will lead to a cataclysmic scenario of fun for readers, or “mess” as he would say.

KARD finally have a feature track that isn’t tropical shithouse – I’ll give you guys one more chance.  Come on, I believe in you.

Another celeb does Kpopalypse interview – it’s going to happen.

Caonimas take action – Kpopalypse readers do a mindblowing thing, for which Kpopalypse is forever grateful.

Kpopalypse continues to annoy the fuck out of everyone in 2019 – don’t ever doubt it.  But I’ll also generates lots of entertainment, education and laughs for my readers.  Thanks for supporting Kpopalypse blog and let’s look forward to the future of k-pop! 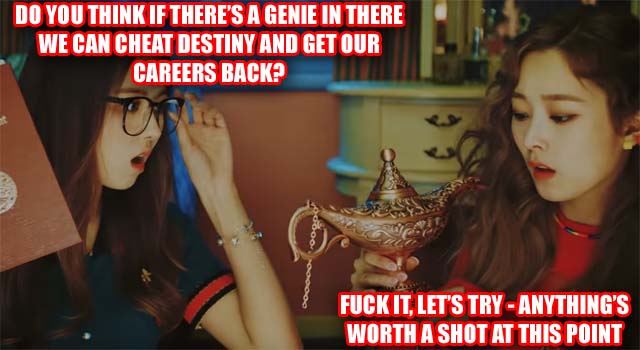