By now you’ve all heard Twice’s new song “Yes Or Yes” and seen the music video.  But what does it all mean?  Could there be a sinister meaning behind the song?  Kpopalypse has the answers!

Oddly, not everybody loves Twice’s new song, “Yes Or Yes”, and it’s not just because the music isn’t some people’s thing, or they don’t like the girls.  There have been speculations published by inferior k-pop websites (who should reflect) that Twice’s “yes or yes” promotes “rape culture”.  Could this be true?

Well, to know this, we need to know what is meant by “rape culture”, which as it happens is an unhelpful term that seems to be either too broad, poorly argued, hazily defined, confusing or just completely harmful dangerous populist bullshit depending on which woman you talk to.  Even the people who agree with the term’s usage admit that it doesn’t actually mean that society and culture explicitly endorses rape, which is what any person seeing the words “rape” and “culture” together side-by-side in a sentence would logically think it means, hence all the confusion.  Therefore this makes the term “rape culture” deliberately inflammatory and inaccurate by design, a false-flag buzzword designed intentionally to grab attention while preventing any debate (because anyone who disagrees with the mislabeled rhetoric can be easily shut down and called a rape-apologist) rather than increase understanding of the issues.  As a result, I’m going to do away with this term altogether and instead ask the following, far more direct and easy-to-understand question:  “Does Twice’s “Yes Or Yes” promote rape?”

It has been argued that “Yes Or Yes” couldn’t be argued to promote rape in (for example) the way that Thicke and Pharrel’s “Blurred Lines” has been argued to promote rape, because the genders are reversed and women don’t hold positions of power in relationships.  Except there’s one problem here (besides the obvious one of assuming women have no power being a massive insult to women in 2018) – the science actually doesn’t back this argument up.  Female sex offenders are actually quite common, and probably even more common than known given that men are less likely to report being rape victims, especially if they have very “traditional” masculine values of themselves being “strong providers who can handle anything” which is a worldview that would be obviously threatened by being sexually victimised at the hands of supposedly “weaker” females.

It’s clear therefore that “Yes Or Yes” in fact could promote rape… but does it?  Let’s take a look.

The video begins in a spooky forest at night, surely a dangerous (not to mention stereotypical) place for potential rape victims to be.  While most rapes are actually not committed in dark secluded places by strangers, the fact remains that some are.

A car then pulls up, the only person visible in the car is the driver – Twice’s Jeongyeon.  She opens the driver’s side door.  Then you can hear someone else getting into the car – who could it be?  Why, it’s YOU of course – this opening scene is in first-person perspective.  Jeongyeon flashes you a smile in the rear view mirror.

Then Jeongyeon drives away – but notice that even though we heard someone else get in (you), she’s still the only person visible in the car.  There’s only one explanation for this – Jeongyeon has tied you up and has laid your body across the back seat so you can’t poke your head out the window and alert any passers-by to your unfortunate predicament as she drives you to the secret Twice rape den hidden deep in the secluded forest.  While most rapes are actually not committed by Twice’s Jeongyeon, it appears that some are.

The car then arrives at the destination, “Twice Square”, a very ornate building built especially for the girls by JYP because Twice have lots of money from all that cultural relevance.  The girls watch the arrival of you and Jeongyeon remotely using their special crystal ball security device.  You are then pulled out of the vehicle and threatened by Tzuyu, who gives you three options (note the numbering in the top left corner which appears during this scene):

Tzuyu explains that what happens to you next will be easier for you if you play nicely and co-operate, represented by the flower.

If you don’t want to play nicely, Tzuyu explains that she will drug you with laced popcorn so that you are compliant.  Note that the popcorn container Tzuyu is holding displays the name of Iron, a noted violent sexual predator.  He’s probably in on this somehow.

Tzuyu then outlines the third option – she makes it clear that if you try to run, she has no problems blowing your entire fucking head clean off with a shotgun and then finding another victim.  There’s plenty of Twice fans out there to choose from after all, you’re not special, you’re just another plaything to be used and disposed of.

It’s clear that by this stage in the story that you didn’t play very nice and that the Twice members had to drug you in order to have their way with you.  In this scene you are seeing multiples of the same girl for no reason, clearly you are hallucinating at this point and have no awareness of what is really happening to you.

Eventually the girls are done with you, and you try to leave, but Jihyo says “ah-ah!  You’re not going anywhere!  We know you’ll just go straight to the authorities, or even worse, you’ll #MeToo us all over social networking!  There’ll be no Harvey Weinstein style scandal besmirching Twice’s reputation thank you very much!”

The girls tie you up again, attach your body to a boat and dump you in the canal.  Nayeon then rows you out to sea so the body won’t be found easily.  You lose consciousness as your soul drifts upward, staring down at Nayeon smiling.  If only you had co-operated. 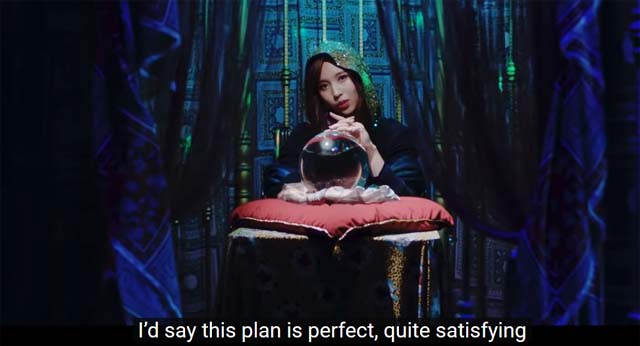 So that’s our basic plot outline and it’s very clearly a pro-rape story.  During the entire ordeal, the girls are remorseless and indicate that the entire situation is 100% pre-meditated, plus nothing bad happens to them, in fact they completely all-kill the Korean pop charts while their victims drown in the sea after having been violated.

Notice how in some scenes Jeongyeon wears a shirt that says “PEOPLE ARE” but the third word is obscured.  That’s because in this video Jeongyeon is a sociopathic serial rapist and murderer, she doesn’t care what people are as long as she can rape them and dispose of the bodies. 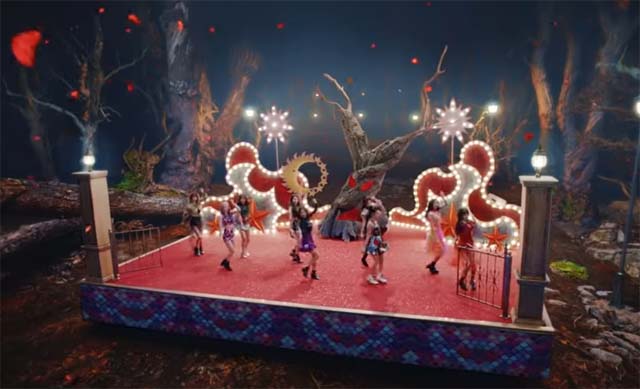 Speaking of dead body disposal, the tree that Twice are dancing around in some scenes is the Tree Of The Dead from Sleepy Hollow.  Not very subtle, girls.  Do you still think that this is a harmless song about only nice things?

Back to rape and it’s made very clear that the girls of Twice like any rapist do not ever take “no” for an answer, this theme is repeated over and over again.  Consent, who needs it?  Not these girls.

It’s really very well done.  I don’t know whether it’s real or fake, but I hope it’s not real because if it is, Dahyun’s hair is probably getting destroyed even more thoroughly than Kasper’s with those multiple layers of dye.  My girlfriend has had hair of most colours of the rainbow over the 8.5 years we’ve been together (it’s blue right now but that could have changed by the time you read this) and so I know exactly how much product is used to get hair of this length looking even half this vibrant.

Also Dahyun just looks great in general.  She is the new designated Kpopalypse far-eyes queen.  Seriously, how cute is she, I hope she never “fixes” those far eyes and that big nose.

That’s all for this post!  Hopefully you all enjoyed it and it met required quotas of truth, bullshitty trolling and Dahyun hair content as per the Twitter poll in the header.  Gosh it’s hard trying to please all of you nice readers but I do my best.  Kpopalypse will return soon with more posts!

7 thoughts on “Twice “Yes Or Yes” explained – how pro-rape is it, really?”