It’s time once again for Kpopalypse roundup!  Let’s take a look at some new releases! 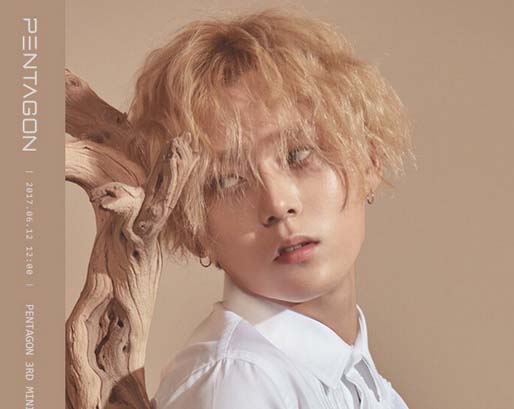 Since Pentagon had a decent track this week here’s E-Dawn and his problematic wood, both unfairly excluded from their latest song.

Given the name of the song I expected some tropical shithouse nonsense, but it’s not even that good.

This song is so depressingly average and nondescript that I can’t even think up a vaguely-offensive joke about Jonghyun to offend half my readers.

Jeong Jinwoon – All I Need Is You

Scan lines do not a song make.  I mean, it’s alright, but the actual song itself never lives up to the blissful first twenty seconds or so before the singing starts.

It’s good to see the Pentagon boys OH&S compliant with their hazard gear on the worksite, but the lack of “Naughty Boy” E-Dawn in the video is disconcerting.

Oh My Girl – Remember Me

A great chorus similar to “Secret Garden“, pity that the rest of it is just time-wasting really, if they could have found a verse and pre-chorus that actually matched instead of just random dribble we could have potentially had song of the year here.

These two A-list EXO boys get together and make exactly the same boring meandering coffee-shop nowhere music that any Z-list nugu can do.

UNI.T – Begin With The End

Some shit ballad that is designed to make you think that these girls aren’t all scratching each other’s eyes out in their dorms.

Another fairly typical power ballad, but it does have an usually catchy chorus for this type of song which is usually boring as shit.

Jay Park has proven lately that he doesn’t have to suck, why he chooses horrible R&B over what he’s actually good at I have no idea.  Guess he gets more pussy this way, can’t think of any other reason.

These nugus don’t even have a video for this and I’m not even sure if they ever will, all they could afford was an animated drawing of Boram’s umbrella.

Well this song isn’t very exciting is it.

No fear of insomnia after listening to this.

I like the animated crying eyes, that seems totally appropriate somehow.

This song was so boring that when I streamed some of this roundup’s creation on my livestream my followers were too busy showing each other pictures of Irene’s ass to even notice this was a thing.

A good review is not applicable.

The GOT7 shit train continues.  Just do another proper group song and stop fucking around with half-assed videos of half a song that sounds half as good as most boy groups.

These guys put a smoke machine and some lighting into their Internet cafe to try and make you think they were at the club or something.

Cool riffs but not much of a song once it gets going.

Hey it’s got some pace to it, I’m all for rap finally increasing the BPMs for a change.  We’ve had decades of slow shit in rap and I’m sick of it.

This song might’ve been alright if they didn’t make the odd production decision to record the drums three rooms away.  When the dubstep explosion happens it’s like someone opened the studio door to go and take a piss.

Some hideous disco thing.  Some liar will probably try to convince you that this is a different style of music but this is the shit people blew up vinyls in the 70s to protest.

About as interesting as a tree, too.

Fine if you’re going to use a VHS feel for a retro sounding song but when you use it over the same old R&B crap that there are about 10 of per week every single week in k-pop and that everyone sane is truly sick of, you just look like a trend-riding cunt.

Don’t tell me how to feel about your shitty music.

The only difference between HUS’s crap and everyone else’s crap is their machine-generated drums are a bit more bassy.  That’s it.  Same old shit otherwise.

I wasn’t going to bother to look at this rather rough “fan backing band” version of Dreamcatcher’s song (I assume that’s what’s going on), probably because it doesn’t take a genius to work out that I would like this, but also because I reckon I could play guitar for this better than these people.  Hey Dreamcatcher my rates are reasonable.

Loona have been doing shit like this a fair bit lately, and I guess now it’s WJSN’s turn, but the trend of the “artsy teaser that doesn’t relate to anything in particular” actually comes from SM’s experimenting with trying different promotional styles with f(x).  This, of course, was what f(x) were actually for – because SM already had Girls’ Generation, they didn’t need another “nation’s girl group” and were basically free to fuck around and try different shit to see what flew and what didn’t.  That’s why for every opportunity f(x) were denied, they also got to pioneer something else that nobody in Korean idol girl pop until that point had ever got to try.  Sadly their own fans’ desire for boring conformity and complete lack of understanding of why f(x) existed (“why SM do they have no fandom name/concert/flashing vibrator with bunny ears like everyone else, SM you must hate them” wah wah wah) meant that SM eventually ditched their experiment, and will probably never try something as bold as f(x) again.  At least with a few doors busted down, other agencies are now gradually picking up the ball.

That’s all for this week!  Kpopalypse roundup will return, and in the meantime don’t forget that there are only a couple days left to do the latest Kpopalypse survey, so click here to fill it out if you haven’t!