Just another boring Kpopalypse post about the same old plagiarism issue nobody cares about.  Do not read.  Please move along everyone.  Thank you. 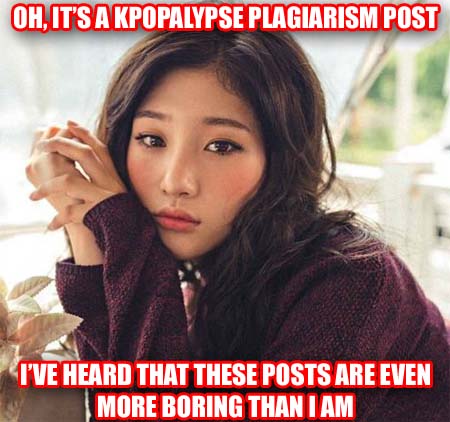 What, you’re still here?  Don’t you have anything better to care about?  Did you really all vote for this boring shit in my misspelled Twitter poll?  Well, okay then.

So.  Before we get started, your ready reference of plagiarism-related trufax:

These links might be helpful if you’ve never read anything that I’ve written about plagiarism before (lucky you) or you’re struggling to understand any terminology.  Once you’ve read the posts linked above, if you decide that you still give a shit, please let’s continue as we discuss

Before we get into the plagiarism, it’s probably important for you to get a picture of what I think of DIA in general.

What do I think of their songs?  The quality is kinda up and down, but maybe on the better side of average overall.  The good songs are definitely good – “Mr Potter” succeeded in being a better Red Velvet song than pretty much all of Red Velvet’s “we’re not going to copy S.E.S for a change” side, “My Friend’s Boyfriend” was also pretty nice and “Will You Go Out With Me” wasn’t too bad.  However DIA at their best are “good” not “great” – they don’t have a truly iconic song of the magnitude of ex-labelmates T-ara, their label’s “T-ara’s little sisters” hype definitely hasn’t panned out for them (and just as well that MBK now have the shits with T-ara and don’t really like mentioning T-ara in press releases these days so we don’t have to be subjected to that nauseating hype any more).  DIA also have godawful fucking shit like “The Love” which is definitely one of the worst musical creations k-pop has ever seen and definitely brings down their average.

What do I think of the members of DIA?  Not much.  Chaeyeon is well-documented to be dangerously boring to the point of non-OH&S compliance, and none of the other girls are even slightly interesting to me, not that I can even remember what they look like or even most of their names.  When their agency added two extra Japanese girls to the group a while back just because they could, I honestly didn’t even notice which ones they were.  The only girl I ever liked in DIA was ex-F-ve Dolls member Seunghee, but since she left the group they’ve visually been a dead zone of fap, a black hole of blandness which sucks in all that is attractive and hot in k-pop and produces nothing in return.

It’s cool that I just copy-paste this same introduction each time I have to do one of these boring posts and make minor changes.  Anyway now that you have a full picture of exactly how much bias you can expect in this article, let’s move onto the plagiarism accusation.

The songs do sound similar.  There’s no doubt that there is similarity somewhere, but where?  Does it actually constitute plagiarism, or are people just being morons again?

Both songs go at the speed of 135 BPM, so that’s a match.  Also both songs have the same rhythmic feel, more or less.

In the “Woo Woo” chrous they add one extra chord so it’s this:

Oh and there’s a bit of a breakdown thing between the first chorus and the start of the next verse of “Woo Woo” where they throw in a jazz chord or some bullshit, and I couldn’t even be fucked working it out, but it doesn’t matter anyway, because Tinashe’s “Superlove” is just this, all the way through:

It never changes.  So that’s definitely not a match or anywhere close.  The songs are in the same key and have similar chords, but “similar” <> “the same” and it has to be literally the same to match on a “lead sheet” and be legally actionable.

That melody thing that happens all the way through on the keyboard or whatever it is:

Not quite a match.  However the melodies are definitely played on the same (or a very similar) instrument or keyboard patch.

There’s no doubt that (as usual) Shinsadong Tiger definitely drew on “Superlove” for inspiration (fuck knows why, the song is shit) and he’s definitely copying it on some levels.  However he’s used the song as his starting point and has taken DIA’s version in a direction that while not radically different, is certainly different enough to be “not plagiarism”.

BUT THAT’S NOT ALL CUNTS

Yes, dumb motherfuckers really did think this.  Actually I think DIA have more of a side-to-side ass-shaking thing, whereas Girl’s Day have more of a grinding lapdancing circular motion, which makes sense as Girl’s Day are somewhat older than DIA and have probably given more lapdances in their lifetime.  But it doesn’t matter anyway because you cannot copyright choreography (if you could, all dancing movements would be illegal).

So there you go, it’s all bullshit.

I’d better end this post with something actually real, as usual:

It’s amazing that k-pop’s legions of plagiarism-obsessed morons missed this one, given how bleedingly obvious that it was it created no controversy at all.  As Flavor Flav’s iconic “yyyeeaahhhh boyyyyy” is a fairly distinctive element of the song and easily identifiable, and has been clearly just lifted from the recording with no credit, it could indeed be considered a “reasonable portion” for sampling purposes and thus be legally actionable.  Of course the songs are completely different in every other aspect, but sampling law is pretty specific that you can’t just steal “distinctive” sections of other people’s recordings.  However I doubt anything will happen to DIA or their agency over this and here’s why: 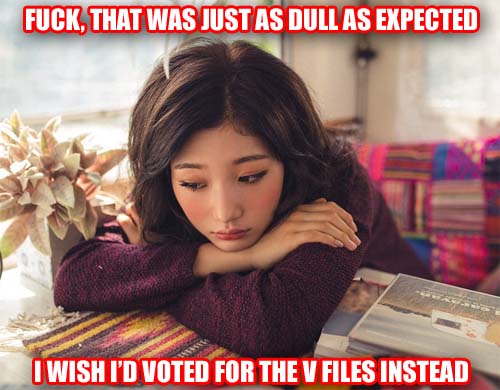