Every day many people search the Internet and find themselves on Kpopalypse blog as a result. I receive daily summaries of all Internet searches that direct people to kpopalypse.com through my website’s sneaky stats-collection machine, which tells me what the Internet is really concerned about underneath the surface. While most of these results are predictable, sometimes a query comes through that is just so unique and compelling that I have to address it:

In this post, Kpopalypse answers the question – why are most kpop fans fat 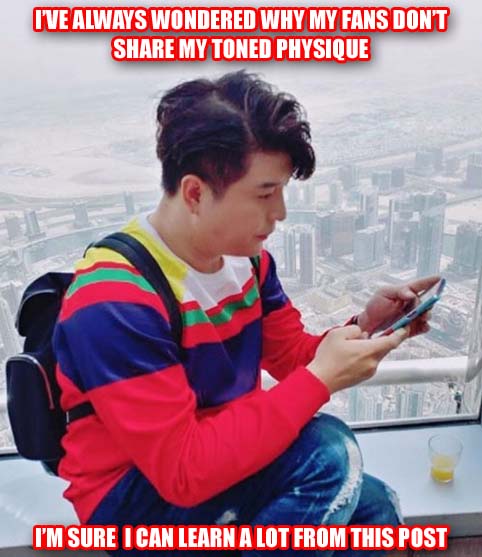 Before I could even answer the question “why are most kpop fans fat”, I needed to know – was it even true?  Are most k-pop fans fat?  To test this, I conducted a Twitter poll. 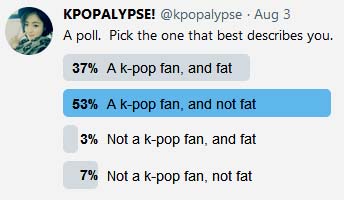 Why is this the case?  The most popular theory out there in feminist k-pop blogger land is probably the idea that there are no fat role models in k-pop, so fans give themselves eating disorders trying to attain the perfect weight, before just saying “fuck it” and binging on ice cream and chocolate.  Of course this is not true because CL has gained weight recently and in the process has now ended all negative body images in k-pop forever.

Regular readers will be well aware of Kpopalypse’s chubby-chasing tendencies, as well as my great admiration for CL in general.  There’s no doubt that she’s moved up a few points in the bias list thanks to this.  It’s only natural that CL has gained weight, as k-pop is actually capable of making people fatter.  According to studies, upbeat pop music when played in restaurants makes patrons stay longer and eat more meals, so the correlation between pop music and weight gain is clear.  Fat people are not predisposed to liking k-pop, but k-pop actually increases the weight of people who encounter it.  K-pop, as it happens, is fattening.

Some people may think that k-pop fans shouldn’t really be all that fat, because what about all those intricate k-pop dances that they try to recreate?  Wouldn’t all that aerobic exercise help the k-pop fatties to shed those pounds?  Science says no, as it happens.  Aerobic exercise isn’t that effective for weight loss compared to non-aerobic types of exercise, so all that trying to do SHINee’s “Lucifer” dance might look cool but isn’t actually going to make you skinny.  If you really wanted to lose weight, you’d be better off doing “anaerobic” exercise, such as weightlifting.  Oh, and not eating, don’t forget that.

Don’t get too crazy with weight loss though – because as a k-pop fan, you need to be fat.  Going to k-pop events involves a lot of pushing and shoving, to get to the front rows at concerts, to secure the best places in queues for high-touches and fansigns, and then there’s the body blows administered by trained security teams that protect k-pop idols from the heaving zerg-rush.  A layer of body fat might just be the ideal protection in these circumstances to safely shield your vital body organs, after all who wants to mess with the fat guy at a “wall of death“?  This may even explain why slightly overweight people, far from being a risk to their own health, actually have longer life expectancies than those of a “normal weight”.  I noticed a lot of fat k-pop fans at Sydney’s 2017 KCON.  I also observed no fatalities.  Perhaps not a coincidence.

On the other hand, remember the horrible and tragic incident in 2014 when sixteen people fell to their deaths and another eleven were injured during a 4minute concert, when a bunch of fans stood on a large ventilation grate to try and get a better look at Hyuna’s chest bumps?  The grate gave way due to the weight of the fans, and they fell a long way down, hitting the floor of the car park below, where unfortunately there were no such similar bumps to cushion their landing.  I’m willing to bet that every single person who got on that grate was of average or slim build.  Overweight people don’t fuck around with standing on metal ventilation grate covers, they know from experience exactly what happens to fat people who stand on flimsy things.  The confidence to stand on a thin construction of sheet metal is a privilege that only skinny people have.

Hopefully this answer was helpful to you all.  If you are a skinny k-pop fan, Kpopalypse recommends that you be careful and OH&S compliant while exercising your skinny person privilege, as there are many dangers out there that specifically affect skinny k-pop fans.  On the other hand, if you are a fat k-pop fan, enjoy your relative safety from hazardous environments as well as plenty of admiration from Kpopalypse!

Thanks for reading!  Kpopalypse shall return with some chubbier posts at a future date! 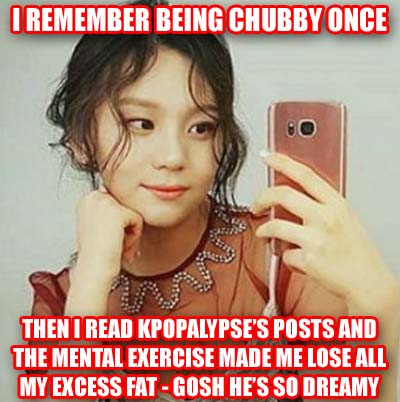 2 thoughts on “Kpopalypse answers: why are most k-pop fans fat”