It’s probably because I’m so POSITIVE about idols, that people often ask me questions like this:

It took me a while to think of one, but I’ve finally done it.  Please now enjoy and learn from this post, where I will present to you an idol that you definitely should not be following.

PROBLEMATIC IDOL THAT YOU SHOULD NOT STAN: JESUS CHRIST

I know what you’re thinking.  “Jesus isn’t a k-pop idol!”  But wait – actually he is.  According to his followers, Jesus is everything (Revelations 1:8) and he is always portrayed with a firm breast so this means that he must also be a k-pop.  So that settles that.

But if Jesus is a k-pop idol, what sort of k-pop idol IS he?  A remarkably shit one, as it so happens.  Let’s look at all the ways that Jesus fails like fuck as a k-pop idol, and why you definitely shouldn’t stan.

Fancy Blackpink fans crying over having to wait a mere 11 months between comebacks, the poor dears.  Even After School and Orange Caramel fans don’t have it as tough as the poor suckers who stan JC.  There was a time when Jesus would comeback often, even favouring surprise appearances with elaborate set design (John 20:1-18), but nowadays he doesn’t even appear on King Of Masked Singer, unlike deities from other denominations.

LACK OF FANSERVICE IN OFFICIAL MERCHANDISE

The only official book from JC’s agency doesn’t even have any full-colour photographs.  How can we stan if we pay full price for his photobook and there are no shots of his abs?  How is he supposed to get to honourable mention tier in the next Kpopalypse objectification survey?  Not even one of those lousy miniature laminated photocards comes with this crappy book.

No venue is going to allow those oversized lightsticks in.  Sure they don’t need batteries but they take up a whole venue seat just on their own, and what about the fire hazard?  All that smoke also makes it hard for fans of other groups to see oppa’s lean body, and don’t even get me started on the carbon footprint.  What a lack of consideration for other fandoms.  It’s not even original, like all k-pop concepts it was stolen from Madonna.

Jesus lived in poverty his whole life while the people at his company keep raking in the money.  Why should you support this?  At least Block B’s first agency paid them $14 over their entire stay and even Melanie from ChoColat cashed out a nifty $12.  JC is still waiting for his first payout from Hillsong.

NO FANMEETS AT OFFICIAL EVENTS

Sure, Jesus puts on some big gatherings, but good luck trying to get him to sign anything, and can you even get a proper hi-touch at any event?  Imagine if you went to see a BigBang fanmeet and instead of getting to stroke Seungri’s semen-encrusted hand it was just the sweaty palm of one of his staffers and they expected you to act like that was the same thing.  You’d want your VIP money back quicksmart over that shit.

PROBLEMATIC FAN BEHAVIOUR IS NOT REPRIMANDED

Every k-pop fandom has their problematic element, but most of the agencies behind the groups will eventually get fed up and release some sort of press statement telling the kids to get the fuck in line, or at least get security to slap the little douchebags at fanmeets.  Not JC who clearly doesn’t give a shit, over 2000 years and not even one press release.

Jesus has been riding high for a while in the search terms (source: this article), but he’s about to be eclipsed by BTS.  Why stan someone who is clearly on the way out.

At least idols pretend to acknowledge you from the stage sometimes, even if they can’t really see you out there in the crowd, plus when they fuck up they try to apologise like they mean it, kind of.  JC has his hands on infinite divine power that he can exercise at any moment, and has also got millions of your prayers stocked up and he’s just sitting on them, laughing while Donald Trump does random shit.  At least KKS gave you a decent song every year or so, which brings us to…

It’s really not that good, is it.  Compare the above Christian bollocks to a group that performs magic rituals and probably believes in Satan.

It’s clear that anybody fangirling for Jesus has picked the wrong side.  JC should learn from the only thing that intern Mohammed at his agency got right and just try to ban people from making religious music completely.  They know that they can’t compete with Dreamcatcher so they’re not even gonna fuckin’ try.

It’s true what they say, the devil has the best tunes.  Sorry Jesus, you are CANCELLED, BLOCKED and DISMISSED. 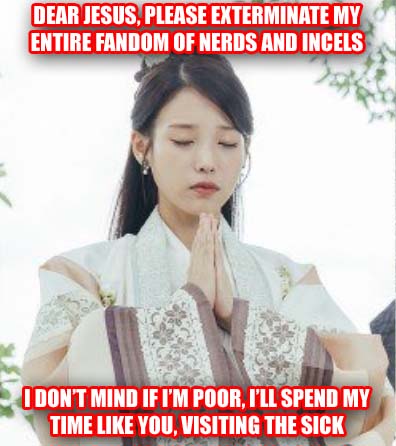 Thanks for reading – Kpopalypse will return!

7 thoughts on “[EXCLUSIVE] Kpopalypse recommends that you do NOT stan this PROBLEMATIC k-pop idol!”