Since Ddu-du Ddu-du was released and it didn’t completely blow chunks, Blackpink now have a ratio of three vaguely-listenable feature tracks to three complete shit feature tracks.  This is a pretty good hit/miss ratio for any k-pop group, so I think that probably qualifies me as a “fan”.  Due to my newfound “fan” status, it is now my duty to report to you that Blackpink’s Ddu-du Ddu-du has just reached 63,545,073 views!

Congratulations to BLACKPINK on reaching this important milestone!  They sure showed those other groups that not anybody can reach 63,545,073 views so quickly!

Here’s some amazing statistics on this achievement!

BUT WE CAN’T STOP THERE

All true Blackpink fans (like me) now need to rally together to help Blackpink reach the important next milestone of 87,582,228 views!

When we are talking about the streaming the videos on Youtube we should keep in mind that Youtube is a system which was created by smart humans and they are really greedy for money, unlike YG Entertainment who are your friends and only have the best interests of all Blackpink fans at heart.

So these are the most correct rules of streaming the videos on Youtube, that will make sure every view counts!

1) Watch the video all the way through, from the first to the last second!  The view might not count as a view if you don’t watch it all!

2) Watch the video in HD (720p, at least)!  Youtube logic is that views only count if they are more pretty.  Also, what if you are watching in 144p and some fucking slag is walking by and says “look at that ugly video, it is so pixels, gosh that is like so ugly”, you don’t want people thinking Blackpink are UGLY do you?

3) DON’T skip, stop or rewind the video, because that won’t count as a view.  Or maybe it does, I’m not really sure, but you don’t want to take chances with this, WHAT IF IT DOESN’T COUNT AND YOU GET YOUR VIEWS CANCELLED AND YOU WASTED YOUR LIFE DOING THIS FOR NO REASON?

4) The sound on your phone should be more then 50%, you can use earphones, but the sound should stay more then 50%!  You can mute the sound on your laptop and PC, but be sure that the volume on the Youtube page is more then 50%, because… well I’m sure sound is important for something.  That’s right, Blackpink are making music and YouTube wants to think you are actually listening to the music bit.  For those unfamiliar, “music” is the bit in the video with all the sounds and stuff.  Sorry, sometimes I forget that following Korean pop is actually music-related and not just a soulless hive-mind popularity contest.

5) Before rewatching the same video you should delete the watching and searching history because YouTube totally monitors those things because they care a lot about persecuting you if you are a “true fan” and not at all about selling your online data to third-party companies. 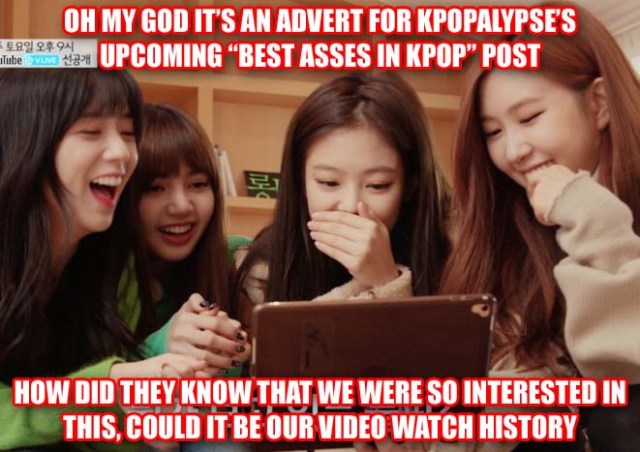 6) LOG OUT after the first watching of the video because from one account you can watch the same video ONLY ONCE in an hour!  But if you have a few accounts then you can delete the whole history after watching the video, log out from one account and log in another one, then repeat.  This will fool YouTube’s spam filter so they don’t take away your precious views, and it also is inconvenient and takes a lot of time to do and shows that you truly care about Blackpink which is important for feeling like a true fan and not a fake pretender who doesn’t help out our girls in times of need.

7) Don’t forget to leave comments and likes, which is called “engagement” and that makes your views more meaningful because people tend to leave comments on videos the first time they look at them.  This fools YouTube into thinking that you are a normal person with a life instead of a batshit insane YouTube-streaming drone who is only good for mulching into pet food.

8) STREAM MANUALLY! Don’t use playlists and loops as they are the main reason that YouTube freezes the view count for a long time, also not all of views from them will be counted by YouTube system, only 10-30%!  Also a playlist might occasionally have something other than a Blackpink song in it, like music from some dead rap guy nobody cares about because he’s dead unlike Blackpink, and the mental stimulation from hearing something fresh and different instead of the same tune over and over may disrupt your concentration and stop you from streaming more, causing Blackpink to lose precious views.

9) DON’T USE multiple tabs or incognito mode – they are counted as SPAM and your views will be deleted for sure!  Why are you hiding being a Blackpink fan anyway?  Aren’t you ashamed of being ashamed if somebody finds out?  Only fake fans use incognito mode.

10) Don’t replay the video or refresh the page for rewatching – your views will be counted as SPAM and will be deleted for sure!  It’s always important to do things the long and inconvenient way instead!  Let’s be honest it’s not like you had any other plans over the next few days, I’m sure you’ve cancelled all your many social engagements and completely blocked out the next week or so in your personal calendar for nothing but Blackpink video streaming activity.

11) DON’T SKIP THE ADS!  They are counted as part of the video because YouTube needs to make their money and if you skip them your views will not counted by Youtube.  Also obviously don’t use an adblocker.  Advertising on the Internet is fantastic and a great way to increase Blackpink’s revenue, because the wealth of YG is very important.

12) Don’t change the speed of the video!  Making the video go faster will not just mean that the view doesn’t count, it might also make you crave more upbeat fast-tempo music in general and you might get sick of the boring slow rap trend in k-pop and stop streaming completely, causing Blackpink to once again lose views.

15) Don’t do illegal things like kill, rape, steal or deal drugs!  These activities all take precious time away from your streaming devices, not to mention being arrested for any of the above crimes will make streaming Blackpink’s new video almost impossible!

and the most important rule:

16) Don’t browse the Internet on the same device while streaming the song!  You might come across snarky, sarcastic blog posts defaming our fandom and turning our deep love of wanting Blackpink to succeed as much as possible in every possible way into an object of callous derision and ridicule.  This may cause you to question the wisdom of wasting precious hours, days and weeks of your valuable life to glorify our girls.