Seoul Fashion Week has just happened, and we all know what that means – that’s right, it’s time once again for Kpopalypse fashion class!  In this episode, Kpopalypse discusses the fashion science of military uniforms, with k-pop examples! 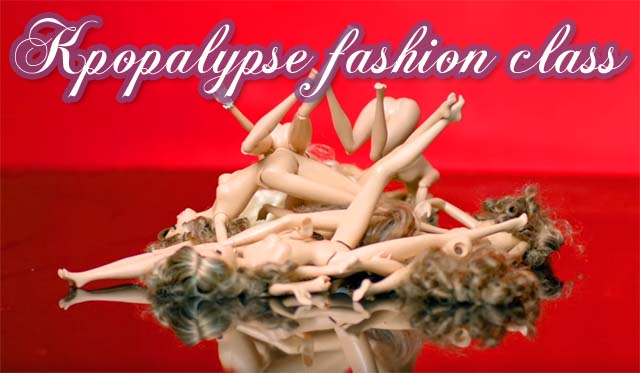 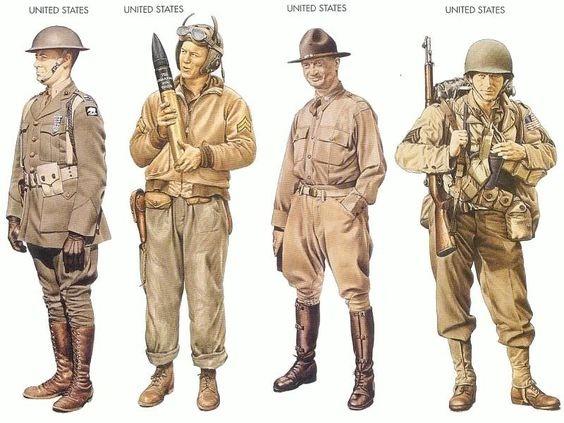 Look at these baggy-as-fuck things.  America loves rehashing World War II in popular culture because it’s the only time in human history that they actually tried to do something vaguely sensible on the international stage, but how could anyone possibly want them to be victorious at the end of the movie when they dress like a brown sack wearing another brown sack with a brown sack attached.  The Allies always look like fucking dirty slobs in any World War II film, which was an unfortunate necessity so they could hide in the mucky trenches, but this is a post about fashion not survival and effective war tactics so these uniforms can get fucked.

The Germans had the right idea – hire someone who knew what they were doing to make uniforms with fetishistic sex appeal.  Even the most fucktarded politically-correct-up-the-ass loser has to admit that while the Nazis certainly had plenty of faults, fashion sense wasn’t one of them.  People liberated by the Allies across Europe must have felt really disappointed by the sudden decline in dress sense they experienced in their neighbourhoods when all the snappy-dressing young men moved out and a bunch of dirty freedom-loving scruffs moved in.  Underneath our collective cultural disgust for the horrors of the Nazi regime we all secretly miss those uniforms, which is why popular culture has been ripping off the Nazi uniform ever since, and everyone from George Lucas to Pink Floyd to Motorhead have taken much of their visual design cues from Hugo Boss’ finest hour.

Women in particular always look outstanding in Nazi uniforms and I’m pretty sure that the Nazis promoted some to the upper echelons of Nazi-whatever-thing just to get them into that high-ranking military garb.  How the fuck the Germans could even focus on their war and extermination efforts with all this hotness going on I have no idea.  Perhaps those theories about Hitler and much of the top brass being homosexual actually had some weight. 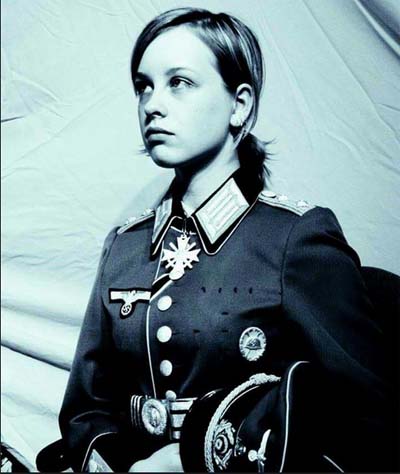 But what is it that made the German uniforms so much better than everyone else’s?  What design principles did the Nazis stick to that were clearly not common knowledge in the scruffy Allied camp?  I’m not talking about ideology, “using the uniform as a weapon”, what people think of the Nazi regime when they see it, the modern-day association with BDSM culture, how does Donald Trump get his hair that way and all that stuff, I’m talking purely in terms of design only.  Divorcing the look of the uniform itself from what it represents and everything else that it has come to be associated with, correctly or incorrectly, why does it work so well for fap purposes – just on its own, without all the cultural baggage?

The answer for me lies in the use of clearly-defined straight lines and framing aspects in the uniform’s cut.  I’ve discussed framing before when I discussed boob-harnesses in the last fashion class, but the impact of lines on curves in general should be considered.  It’s a known phenomena that the perception of curves is affected greatly by the introduction of straight lines.

Both of the images above contain a perfect circle, however the circles look distorted at first glance, particularly in example a. whereas b. has a softer level of perceived distortion.  In a. the circle appears more distorted on the right side, whereas b. the distortion appears to be stronger on the left side.  This is due to the lines running closer to the parallel with the curve of the circle at those points.  However in places where the curve runs at a near-90 degree angle to the straight line, the distortion effect is minimal or absent.  We can also see that when the lines spread out in figure b. the distortion effect is also less apparent.  These diagrams therefore demonstrate the following:

So, straight lines are making curves appear curvier and having a great effect on smaller curves in particular within close proximity.  Yes, that certainly sounds like a good situation for k-pop, where the curves of the women are generally on the smaller end of the scale and the costumes are tightly fitted.  Let’s now have a look at the practical application of this principle.

Boring modern infantry uniforms are boring.  There’s too much confusion and nothing is clearly defined, which is of course the entire point of an uniform like this, so the person wearing it can’t be easily perceived from their background.  The Crayon Pop girls may meet required standards as well as OH&S requirements for the military but those vests are definitely fap-proof. 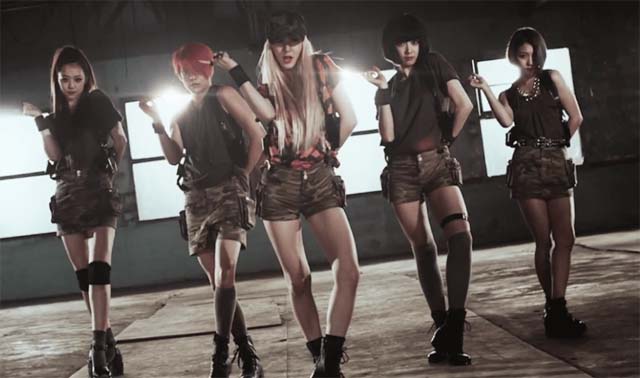 The girls from f(x) got a little closer to the mark during their Sewol Ferry tribute song “Red Light” but their variations on the Lara Croft style shirt and camouflage pants combo veer somewhat away from military fashion and thus don’t really display the type of properties that we’re discussing in this post.  Interesting to note that the military style here is mainly confined to the bottom half of the clothing, which is an exception to usual practice and tends to lessen the effect somewhat.

More typical are Pritz who kept the baby doll dresses but just accessorised the top half, and “Sorasora” is much closer to what we’re talking about.  Those smartly-cut button-up tops look great because they provide some squareness and solid lines to offset the girls’ curves, they give all the military style that is required, plus the inclusion of the armband is a cute touch.  Pritz were so effective in this role that they caused a lot of controversy with these clothes which was weird because…

…GPBasic went even more in the same direction than Pritz did for “Pika-Burnjuck“, even scrapping the not-very-Nazi-like frilly dresses, but nobody cared, I guess because the song was so bad that nobody probably even noticed it, or maybe it was the agency’s fault for giving these girls this concept when they were way too young so it just looked stupid on them.  Mind you given that in the dying days of World War II the Nazis were putting young teenagers in uniforms and sending them to the front because they didn’t have anyone else left to fight the Allies, this remains for my money the “most Nazi-like” of all female k-pop concepts.

Not all uniform concepts were commercial failures.  Of course everyone will remember Girls’ Generation’s costumes for “Genie“, which once again demonstrate that it’s the top half of the clothing that really makes the military impression, from the waist down this could be any girl group’s outfit.

Labelmate BoA gave a similar idea a much darker flair for “The Shadow“, with some nice gold trim accenting the lines of the outfit, creating what is probably the hottest BoA video ever made, for at least the approximately 10 seconds total where she actually wears this getup when you stitch all the footage of it together.  By 2012 SM Entertainment were clearly the kings and queens of putting girls in military outfits. 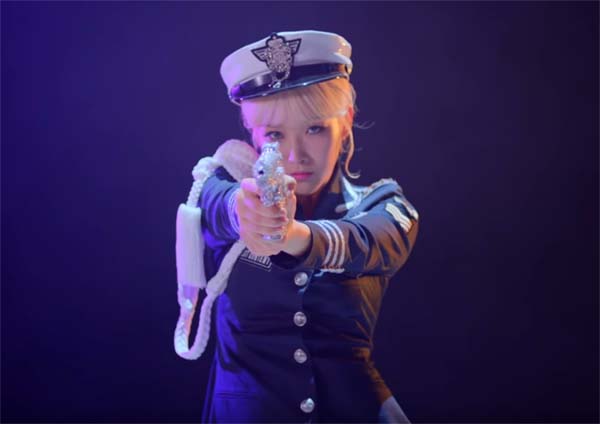 Like any trend gaining steam in k-pop, other agencies caught on fast, and k-pop was soon embroiled in an arms race to see who could showcase the most fappable military uniform use.  A strong case could be made that Wanna.B scooped the pool with “Hands Up” and even though this is probably a police uniform the design is similar enough that it doesn’t matter for my fapping purpose.  Supposedly the original Nazi uniforms were heavily inspired by American police uniforms anyway, so you know, whatever.  The principles of squareness and solid lines to heighten curve perception remain intact.

The reigning queens of military fap concepts these days would have to be AOA, who have exploited this territory over and over again.  Both in band form with “Get Out” which had several outstanding outfits that were all cut beautifully to complement the girls, and also in dance group form with… well, everything else, really.

Who knows what’s happening with AOA these days and if they’re going to ever come back, given that Choa has fucked off, Jimin is constantly doing weird bullshit that doesn’t suit her and everyone else is selling soft drink or whatever.  But anyway that wraps up the girls.  Since Kpopalypse is all about gender equality and giving the fans what they want, let’s now look at some examples of men in uniform.

Here’s everyone’s favourite group BTS and they’re in some nice-loo… oh wait, what was that?  This group are not k-pop?  Okay, guess I’d better ignore them then.  Moving right along to actual relevant groups that matter for this post, sorry about that little interruption.

So here’s an actual relevant k-pop group.  SHINee’s schizophrenic dubshit “Everybody” might be some of the worst k-pop music known to man but there’s no denying that they’ve absolutely nailed the military look in the video with this one, they look fantastic and Kpopalypse officially dubs SHINee the reigning kings of military style for men. 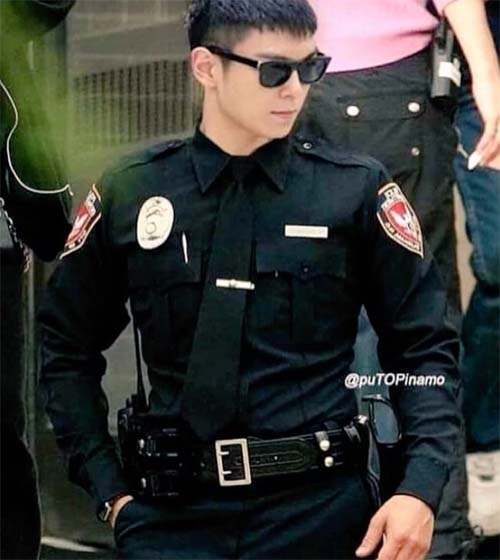 Kpopalypse polls consistently place T.O.P in the top position for fap purposes so enjoy this picture of T.O.P in uniform.  Note that the same form and line-enhancement rules apply for men and women so you should have no problems fapping to this if you’re that way inclined, so I’m told. 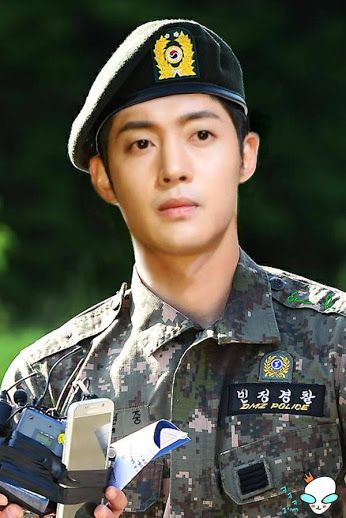 Of course Korean men have the extra added advantage of actually having to do mandatory military service, so no matter who your fave is, you’re probably going to get to see them in sexy military gear one day.  Unfortunately they get stuck with crappy western style uniforms during that time but oh well.  Above is Kim Hyun Joong, who is currently serving.  Isn’t he dreamy?  Don’t worry fans, he has proven hand-to-hand combat skills, he’ll be fine out there!

However if you don’t like to use your imagination too much there’s always gay-dog-whistle group N.O.M who do their best to wear a uniform while also wearing as little of the uniform as possible.

Also hats off (or maybe on) for Im Jaebum who actually donned a legit Nazi coat and hat for a performance, AND was sure to flash the man-flesh at the same time.  Now that’s commitment!   Needless to say, his dedication to the cause of military fap and willingness to really go the extra mile is much appreciated by Kpopalypse and hopefully my lovely readers as well.

So, that wraps up this post.  Oh and here’s another quick Crayon Pop image before we go just so the girls don’t kill me. 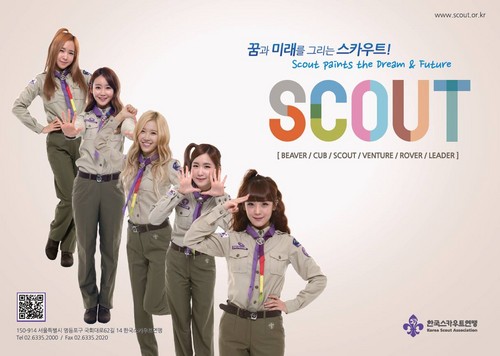 These uniforms look great and probably better than anything Crayon Pop actually wore while they were active as a group.  I know what you’re thinking but Scouts are just the sanitised western version of the Hitler Youth, so you better believe that this counts.  Kpopalypse will return!