Sometimes it’s good to have a break from all this Internet traffic and being such a well-loved blog, and you all know what that means.  Yes, it’s time once again for the series with the most selective appeal on Kpopalypse blog, Kpopalypse Nugu alert!  Let’s take a look at some more nugus for your entertainment!

English is a fucking hard language to learn, and anyone who thinks this isn’t true has clearly never tried to learn English as a second language.  English is a hugely popular language to learn due to essentially being the current “global language of trade”, and many people spend their whole lives learning English to a fluent level, often with mixed results.  The reason why English is such an absolute cunthole to master is because it has such a hodge-podge mulatto history due to being basically an informal mix of other languages, so as a result it doesn’t have consistently-applied rules for anything.  Other languages have strict systems for what can be used where and in what context, but rules in English spelling such as “I before E except after C” have enough weird exceptions to make you reach for your handkerchief, and the pronunciation of word strings in English changes on such a random case-by-case basis that learning it all feels rough like coughing up dough.  As a result of all this linguistic anarchy, the only way to truly learn English is rote memorisation, because you can’t really fall back on any useful consistent system in the ways that learners of so many other languages can.

Most idols in the bigger agencies are made to learn English as part of their training if they’re not already fluent.  CEOs of big labels don’t mind shelling out a few extra bucks for some English lessons to help their stars along if it means more chance for them to make that all-important connection with international audiences.  Also it probably helps them to pronounce those all-important English catchphrases in songs correctly, YG was ahead of the curve on this one but most of the big agencies have caught up now and mispronunciations in songs are becoming rarer and rarer.  There’s a lot of evidence that English usage is penetrating into the idol sphere in a big way.  However if you’re not fortunate enough to have the resources of a big label to fall back on, how are you going to squeeze in that all-important English literacy?

Let’s get it started!

We’ll start with the video with the most subtle captioning.  Regardless of what walk of life you came from and what you knew before you started watching this video, if you have at least rudimentary English reading skills, by the end of this video you’ll have absolutely no doubt in your mind that the artist in the video is called Mandy and the song is called “Purple Water”.  Don’t panic when the caption reminding you of this disappears at 2:24, as it makes a dramatic re-entrance only a short time later – our friend Mandy won’t be leaving you first-time English readers in the lurch for too long, she’ll make sure you don’t forget that all-important artist and song title.  Not only this but Mandy has bonus chest-captioning in some scenes – she’s “happy when it rains” apparently, and since it never actually rains in the video (not even in the Windows XP screensaver-grade border effects), I guess that explains why she doesn’t manage to smile at any point.  Personally it was the boring R&B that left me frowning the most here despite the sound-effects-drenched chorus, but hopefully she made someone happy with her useful English instruction and topless freestyle swimming.

Notable attribute: cloud-watchers will be happy to see their favourite hobby promoted extensively

HunnyHunna isn’t playing around with any subtlety – he’s here to let you know that his song is called “Cinderella” in any way possible.  This includes of course repeating the word a whole bunch of times like any good English instructor, but also as an added bonus taking up 10% of the weird vertical-framed video just with CINDERELLA in all-caps on one side because the song is called Cinderella and boy you’d better not forget about it.  However, at 2:07 HunnyHunna boldly flips the script, fucking off the vertical bordering, switching to stunning panoramic widescreen vistas with only a small border and moving the CINDERELLA to a subtitle position, I guess by that point he felt that viewers had received the message loud and clear and wanted to treat them to something visually a bit more special.  Unfortunately there isn’t a similar change in the music, which remains turgid R&B throughout, but at least the video meets its required quota of views of skylines – captions, Korean R&B, strange video borders and lots of staring at clouds seem to all go together like peas in a pod for some reason.

Notable attribute: cameraman didn’t bother to clean the lens for those cloud scenes, I guess Cinderella took the cleaning cloth with her to the ball

Another video just like the others.  Strange captioning taking up screen real estate?  Check.  Even more screen real-estate hogged by unnecessary bordering?  Check.  Boring R&B yolo-lite shit?  Check.  More fucking clouds?  Checkity-check check, motherfucker.  The clouds seem to have a more synthetic look this time however, seemingly projected onto a green-screen backdrop behind our performers who clearly couldn’t be bothered going outside for the real deal, and Kicksol doesn’t spend a whole lot of time staring at them, preferring to float around in what is probably supposed to be an alcoholic daze but I’m sure his wasted-looking movements are as rehearsed as any k-pop idol performer’s dance routine.  The really exciting highlight here however comes at the very end of the song, where the captioned song title has a funky vertical scrolling effect applied to it that might just blow you the fuck away if you were feeling understimulated up until that point, which is likely given everything else on offer here.  I think Kicksol is probably alone too, perhaps there’s a reason for that. 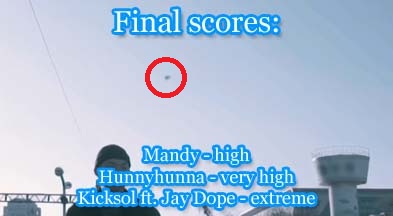 That’s all for this episode of Kpopalypse Nugu Alert!  Kpopalypse will return with more posts soon, and more nugus at a future date!