Welcome to another journey into shit music with Kpopalypse!  This time, we’re going to take a look at the granddaddy of “music genres that ruin everything”, jazz, and its impact on k-pop!

Well, jazz didn’t start out as complete shit.  Jazz was initially an attempt to improve music, generally speaking.  Exceptionally bored African American blues performers from the early 20th century and prior, lamenting that T-ara’s “Roly Poly” hand dance was still at least 100 years in the future, decided to spice up their lives in a more immediate fashion by making their dull I-IV-V blues chord progressions and samey pentatonic melodies a bit more interesting and varied.  The results were initially acceptable, with ragtime, dixieland and swing jazz all being variants of the early jazz style that were not total garbage.  Jazz music in the 1910s to 1940s was pretty much the Slayer of its day –  loud, fun music that caused social concern among stuffy conservative types and that parents didn’t like but that fans of the music could dance wildly to while engaging in various substance abuse.  And dance they did.

Then something horrible started happening to jazz music – techniquefagging.  The same kind of techniquefagging that currently plagues k-pop vocal analysis crept into jazz in the 1940s thanks to the invention of bebop.

Oh, wait… no not that bebop, this type of bebop:

Bebop was a style of jazz that was invented probably because jazz musicians felt they weren’t getting laid enough, and thought that if they just made their music a bit more technically impressive, the hot girls in the audience would see their incredible skill and want to bang them instead of the male dancers.  As a result of this growing need for jazz musicians to get their dicks wet, chords, rhythm and melody became a lot more complicated as the artists competed for jazz fangirl puss.  Pentatonic and diatonic scales were swapped out for “bebop scales” with extra notes that made no sense, chords had 7th, 9th, 11th and 13th notes added for no clear reason, improvisation (i.e making it up) was favoured much more heavily over sticking to a fixed pre-written melody, and rhythm became more random and stupid, successfully thwarting any attempt at creating a groove.  Just listen to this fucking wank.

Naturally people didn’t want to dance to this, because this rhythymically-messy-sounding music was now completely undanceable, and the general lack of an easily-followable melody meant that it wasn’t particularly catchy anymore either.  Bebop jazz was essentially jerk-off music for brass players and drummers to show off how they could play really quickly, it had less and less to do with what the listener wanted and more and more to do with the musicians disappearing up their own assholes.  As a result, jazz gradually started moving away from its roots as a dance and popular music form, and into a type of music that people just sit there and watch in awe (or more likely, boredom) as the performer plays a lot of notes and then write blogs about it (or whatever people did instead of write blogs in the 1940s).  People who actually wanted to have fun with music, instead of watching this bullshit like the museum fossil it had become, moved over to big-band, rockabilly and rock-and-roll, and the music fans moved with them, swiping all of the early jazz dance moves plus all of the good-time party atmosphere of the early jazz style.

On the other hand jazz was just getting worse and worse.  By the 1960s, rock and pop music was moving into all sorts of new directions that actually made some degree of musical sense (plus a few that didn’t), meanwhile jazz was well and truly masturbating itself to death as it had mutated into “free jazz” where they didn’t even have proper chords and structure anymore.  Watch these clowns below play the same five notes from the start of Stravinsky’s dull modernist twaddle “The Rite Of Spring” 57 different ways over random rhythm and chords that make no sense and bore everyone to death for nine minutes.

Finally realising their grave mistake and seeking to pull themselves back from the abyss, jazz musicians started meshing with rock music again.

Unfortunately, jazz musicians chose to try and claw their way back to relevancy with the only type of rock music that nobody actually listens to either, progressive rock.  So this new “jazz fusion” style was too little too late, still sounded like a wankfest, and nobody cared, because jazz + rock = elevator music.  Jazz artists continued to not get laid at astounding rates as their crushes listened to ABBA and Madonna instead.  They cried and wailed about it a lot, mainly to music.

The latest attempt by jazz to be culturally relevant is the movie “Whiplash” which is about a jazz drumming student being treated like an underpants stain by his asshole teacher, it’s a great film sort of like a musical “Full Metal Jacket“.  That is, until the final scene where a gunman completely fails to storm into the auditorium and kill both the teacher for being a hardcore cocknugget and the student for being dumb enough to not hire a better teacher after the very first lesson with this douchebag who has even less common sense, manners or hair than Kpopalypse.  At least Private Pyle had the good sense to keep his M14 locked and loaded.

Oh, and let’s not forget SM Entertainment promoting snooze-friendly jazz fusion artists all of a sudden, clearly mistakes were made.

Jazz is at its very worst when combined with the ballad form.  However unlike the more upbeat version, jazz ballads haven’t changed much from their early beginnings to more recently.

They were shit then and they are shit now.  At least bebop is uninteresting quickly so it’s over sooner rather than later.

SO LET’S BRING K-POP INTO IT, BECAUSE YOU’RE PRESUMABLY INTO THAT

About time, right?  Just the mere fact that you’re looking forward to this section of the post alone should tell you how much jazz fucking sucks.  You just can’t wait for me to stop discussing actual jazz by actual jazz musicians and start discussing k-pop’s ultra-lite copies of the form that are just as rubbish but at least have some small degree of current cultural relevancy because they are at least 10% actual pop music.  You all couldn’t wait for this post, after all. 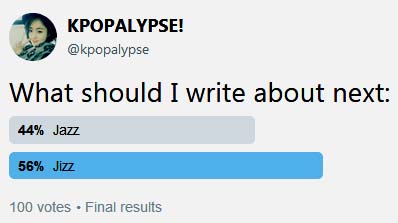 Really, the only good attempts at jazz in k-pop are IU’s “Modern Times” album, which does a reasonably faithful version of 1930s “swing jazz” with “Love Of B”:

Sort-of-dixie-style with the title track:

Big-band style with the feature track “The Red Shoes”:

And etc etc.  All of these are early jazz styles.  IUs concept smartly cuts off the retro fetish at the 1940s, meaning that the shit versions of jazz that were all about technique-wank and came later are not explored.  She left that to TVXQ, who inserted a pointless “bebop breakdown” into “Something” at 3:28:

However most jazz integrated into k-pop isn’t the fast type, but rather the slow jazz-lite coffee-shop bullshit sound.

Often the music videos are either in a coffee shop, or feature actual coffee, just to drive the point home at how boring this is.

Or sometimes they even go the whole hog and call the damn thing “Coffee Shop” or something similar.

The improvisational element of jazz isn’t closely emulated, and sometimes even the extended chords are dispensed with.  Korean coffee-shop jazz ballads are more about the rhythmic feel (or rather, the lack of rhythmic feel) as well as the texture of the more “smooth” types of jazz.  Boring instruments are always preferred, in particular the Fender Rhodes usually gets a big workout.  It’s jazz for people who find the boredom of actual jazz too “edgy” or whatever and prefer something even milder and more musically worthless, the musical equivalent of the shit blogs that people who can’t stand my writing read so they can stay inside their fantasy bubble where everything is sunshine and lollipops and their bias is the bestest best person ever.  (Although all my haters secretly can’t stop reading my shit anyway.  Hopefully they are all jazz fans and get extra annoyed by this post and have a good hate-fap.)

So that’s how jazz influences creep into k-pop now, usually not through melody and harmony, but through texture and feel.  Fortunately, k-pop as a whole is so schizophrenic that even an unlikely group of coffee-shop scrubs like Bolbbalgan4 can git gud and dump all the crappy jazz shenanigans to make a decent pop song occasionally.

If even they can do it, there’s hope for the rest of them.  Maybe even Urban Zakapa and 10cm will have good songs one day?  Who knows, but in the meantime, that’s all for this post – Kpopalypse shall return!