Kpopalypse Plagiarism Fun Times is back to take a look at the latest plagiarism controversy surrounding Sunmi! 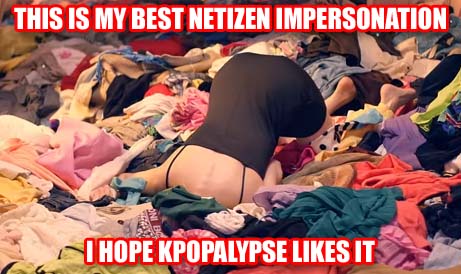 Inquiring minds wish to know the answer to the following question:

Before we get into the plagiarism, it’s probably important for you to get a picture of what I think of Sunmi in general.

What do I think of her songs?  Well I thought “Gashina” was her worst song so far, some boring tropical shithouse bullshit that people only liked because of the gun choreography, I guess all those American k-pop fans are so utterly fascinated by guns that seeing some girl do the shape of a gun with her finger and pretend that she’s shooting something is enough to give them serious boners and make just about anything interesting to them.  As for her earlier solo songs, “Full Moon” was acceptable but not that spectacular and just sounded like everything else Bravesound put out in 2014, but her other song from back then “24 Hours” was a really good slice of breathy 80s pop with a cool tango breakdown, by far the best music she’s ever been involved with as a solo artist.  Her latest song “Heroine” however is what prompted this post and it’s honestly just boring to me, far too similar to the crappy song that it’s copying to actually be good or interesting in any way.  More on that later.

What do I think of Sunmi in general?  Well, actually I don’t think of Sunmi in general.  For me the Wonder Girls were always all about feminist icon Sohee, and when Sunmi left and was replaced by some other also-ran chick I honestly didn’t even notice.  In fact, I couldn’t even tell you which era of Wonder Girls had Sunmi in it and which didn’t, that’s how little I gave a shit about her presence in that group.  So when she went solo I was just like “oh, it’s one of the girls in Wonder Girls that I don’t care about, doing a thing”.  I guess she looks okay, and is definitely looking better with age, but my main thought while watching her dance around at the start of “Heroine” was “wow, I bet my girlfriend would look great in that blue dress, way better than this bony k-pop bitch”.

Anyway now that you have a full picture of exactly how much bias you can expect in this article, let’s move onto the plagiarism accusation.

I tried to cue these videos up to play at the appropriate chorus moment so you can compare easily, but it didn’t work because YouTube are caonimas.  Know that the chorus happens at 59 seconds for Sunmi and 56 seconds for Cheryl Cole, for your comparison purposes.  The similarities are as follows:

The main differences are as follows:

It’s fairly obvious that Teddy, the songwriter of “Heroine” (also known for work with 2NE1/Blackpink/YG’s hydro lab) was directly inspired by Cheryl Cole’s song, they are certainly very similar and the similarity is definitely not coincidental… but is it enough to be called plagiarism?  Let’s look at each individual point.

Lyrics – while the lyrical themes are arguably a bit similar, the words themselves are very different.  Certainly no plagiarism here.

Chord progression – exactly the same harmonically, and only slightly different rhythmically.  This does not constitute plagiarism, at least not in isolation.  However the same chord sequence combined with the same melody over the top could constitute plagiarism if the two match for an extended length of time.

Melody – the two melodies are very close, but not exactly the same, and for charges of plagiarism to stick, the melody has to be identical for a reasonable stretch of time, so it appears the same on a “lead sheet” which is what is used to determine plagiarism in court cases.  The most obvious difference is that Sunmi’s melody adds two notes at the end of the first and third phrases, moving down the D major arpeggio, whereas Cheryl Cole’s melody stays pretty much in the same region.  In the second and fourth phrases there’s also slightly more arpeggiated movement in the Sunmi melody.

Out of all the plagiarism cases that people have asked me to write about, this one is actually the most borderline.  It’s not a clear-cut case of legally-actionable plagiarism, but Teddy has nevertheless very blatantly copied the original song, plus has been very, very careful to insert just enough difference in the melody and rhythms to get over the line should he have to slug it out in a courtroom.  So in other words, it’s a “no, not quite plagiarism, just naughty” from Kpopalypse.

(Note however that this is the sort of case that if tested in a jury trial would probably bring back a “yes” vote because it’s so similar in so many ways that a jury may not actually give a shit what the musical facts are and decide that the song is plagiarised in spirit (also see the infamous Blurred Lines case).  Which is why any sensible person defending a case like this should avoid the matter going to a jury trial at all costs.  The chances of any random collection of twelve people musically understanding what they’re being asked to weigh in on in a case like this is exceptionally slim.  You might as well just give the case to any k-pop website’s comments section and be done with it.  And because of this, there’s a slim possibility that Teddy will just cop to it anyway because saving face might seem like the easier path than sticking to his guns…. wait, who am I kidding, it’s a YG artist, he’ll just say “I wrote it” and laugh it up.)

But wait, there’s more!  Here’s a comment from some netizen about Sunmi’s “Heroine” and whether Teddy will fess up to it or not:

Hmm.  Is this really worth my time?  No, but let’s take a look anyway.

Clearly, this person is just seeing what they want to see.  The only similarity in any of the outfits of either video is that at both points, the girls wear hats.  Hats which don’t really look that similar, and are matched with different styles of outfits in different colours.  If anything, Sunmi’s clothes here look like Keysha Cole’s photo negative.

The dances – they ain’t similar, unless you’re a retard.  Sunmi’s dance reminds me of many other yolosweg dances in the crouching scenes, and some girl dance I can’t quite put my finger on (but which is probably about a dozen of them) during the hand-flappy moves at 1:42.  Cheryl Cole’s dance on the other hand just looks like a bunch of swaying around like a drunk person.

The concept on the other hand is just some generic fraudulent girl-power-lite thing like almost all pop music now (“I’m gonna FIGHT… for your love” vs “I believe in your POWER… to treat me like shit”) so let’s just say they both copied The Spice Girls and call it a day.

Okay, it’s not plagiarism really, but I’m willing to say that it is just if it stops this bullshit trend from continuing.  We’ve all had enough toot-toot squirt-squirt in our songs now to last a decade, can we stop tropical shithouse now thank you.

(Also, although the rolled up shirt and shorts look like shit when she’s doing the “motorcycle” dance, Lovefoxx looks great in every other scene here and is hotter than all your k-pop idols.)