Welcome to another episode of Kpopalypse Nugu Alert!  It’s time to check out some more nugus!

This post is the last Kpopalypse Nugu Alert for 2017, so it doesn’t have a theme, it’s just a collection of songs that I couldn’t find a place to squeeze in elsewhere.  There’s plenty of nugus always coming in, and also plenty of requests from you readers to have certain things included in this series.  The paradox is that Kpopalypse Nugu Alert is, and has always been, the least popular series on Kpopalypse blog.  It often feels to me like there’s more people suggesting artists for Nugu Alert than there is people reading the posts that come out!  Therefore I don’t really know if Kpopalypse Nugu Alert gives these artists much help or not, but I feel morally obliged to continue to feature nugus and this series will never die as long as Kpopalypse blog is active.

I started Kpopalypse Nugu Alert after a comment somewhere accused this blog of being “slightly hipsterish” because of general nugu support in other posts.  Supporting nugus is of course a matter of great pride and honour for myself, but whether that makes me a “hipster” or not, I have no idea, as I’m a bit hazy on what actually constitutes a “hipster” anyway.  It’s one of those terms that seems to depend a lot on who is using the term and what they want it to mean – some people tend to use it to mock those who take up an obscure cultural position out of vanity, whereas other people use it as a catch-all for anybody who is outside of the latest trend, or conversely to deride a predisposition for a trend that is very specific.  I have no idea where I fit into all of that and I don’t care because I’m so far out of the cultural loop in my personal life that I really have no clue where I’m even positioned, but I don’t mind running with a “hipster” tag, or any other tag, if it irritates the right people. If supporting nugu groups annoys a bunch of idiots then that’s fine, because annoying stupid people is an important part of Kpopalypse blog.

We’ll kick off this episode with a new group who has just debuted their first song.  My caonima spies tell me that Yellowbee actually has Boyoung in it, a former member of the group Dorothy, who had the excellent song “Purple Lips” last year, not that I know who Boyoung is or can pick her out of either group but I just thought you’d be interested to know that.  Unfortunately “Hiccup” isn’t anywhere near as good as “Purple Lips” but it’s at least pleasant enough, not too annoying and doesn’t have any awful R&B or tropical shithouse in it, which probably puts it in about the top 15% of k-pop for 2017 even despite its somewhat underwhelming blandness.  What Yellowbee do certainly have in abundance is a lot of jumpers, and if you’re someone with a jumper fetish you are well-catered to in this video which features snuggly fabric-softened jumpers galore straight from the dorm washing machine.  Fans of Frenchface will also appreciate the beret action happening with a couple of the members, but the visual style is partly undone by poor colour-matching between cuts as well as that hideous red border throughout which will make you feel like your eyes are equally red around the edges by the time the video is over.  They could have at least made it yellow to match the group name, maybe someone at their agency (Addiction Entertainment) is even more colour blind than I am.

I spend a lot of my time when reviewing any sort of Korean rock music complaining about how it’s so wimpy and light compared to rock music from most other countries, so if you’re wondering how to do rock music correctly it’s time to take notes.  Korean punk group The Veggers don’t waste any of their 52 seconds of running time on ponderous intros or boring plinky “let’s hit that one note over and over again and stare enigmatically like we’re really doing something” Coldplay riffs and get straight down to the business of rocking, banging out an entire song in less than the time that it would take Day6 or Nell to scratch the crusties out of their asscracks and work out which jack in their guitar amplifiers is the input.  The song is pretty decent too, although it wouldn’t matter that much if it wasn’t because at least it’s over quickly in any case, so there’s definitely something to be said for brevity.  Even if you hate the song however, it’s hard not to love a 50ft woman stuffing cars in her bikini straps and then destroying a city with a baseball bat, hopefully that section of building she set on fire has the office that belongs to the people who keep trying to write T-ara out of k-pop history.

Notable attribute – probably the only baseball-related content that will ever be featured positively on Kpopalypse blog, how did baseballphile Asian Junkie pick up on “Yes” but miss this

The “interpretive dance” video is a time-honoured budget-conscious music video trick and has been used several times both east and west to give appropriate visual accompaniment to a song while keeping overheads low.  It turns out that Howayo are fans of the less-is-more approach, with their other video being equally minimalist but I thought I’d focus on their new song just because it’s newer and also a bit more interesting both musically and visually.  Even though this video isn’t quite as poverty-stricken as it appears, it’s still pretty amazing what you can do with a dancer, a deserted subway tunnel, a bedsheet and some flood lighting.  The song isn’t quite up there with the dancer’s impressive fluidity of movement but at least it’s not a sound that is overplayed at this present time and it ambles along pleasantly enough even if it seems like the music is there to accompany the visual rather than the other way around.  There’s not really much else to say about this as nothing much really happens, and there seems like a real lost opportunity here to do some cool shadow-puppetry with the hand scenes.  I bet she can do a kick-ass Tyrannosaurus Rex or something.

Notable attribute – did you know that if you clasp both your hands together with interlocking fingers you can shadow-puppet the head of a penis? 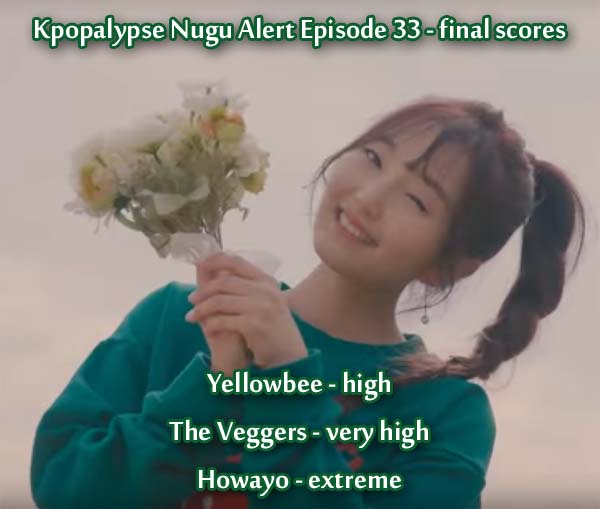 That’s all for the last Kpopalypse Nugu Alert for 2017 – Kpopalypse will return in 2018 with more nugus!