Never a place to shy away from the big issues surrounding k-pop, it’s time for Kpopalypse blog to ask an important question! Should Siwon’s dog be put down? Read on and discover the answer! 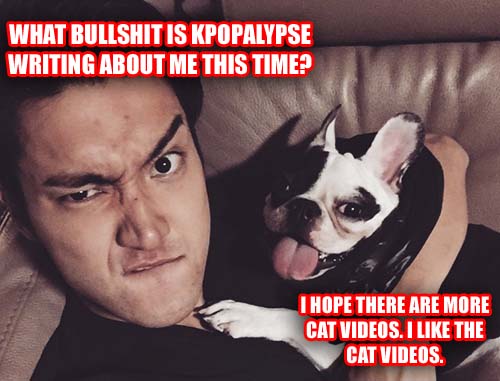 By now you’ve probably all heard the story about Super Junior’s Siwon and his dog, Bugsy.  For those who don’t live their entire lives underneath the glow of their screen following k-pop every waking second, here’s a quick recap.  Siwon’s dog bit someone while it was walking around unleashed.  The bite was then infected, and the person died.  Siwon then said “sorry, sorry”.  The victim’s family forgave Siwon.  Now you are completely up to date.

However, people are asking the question – should Siwon’s dog now be put down?  Personally I’m not sure.  While it is true that a dangerous animal left at large could bite more people, I have complete faith that Siwon has learned his lesson from this bitter experience and will take appropriate caution from now on, so it’s unclear what putting the dog down will actually achieve.  Of course, I’m not a pet so what would I know?  It is clear that I had to consult k-pop’s only 100% reliable truth oracle to determine the answer to this important question.

This is my cat.  Her name is Stiglitz (named after Hugo Stiglitz from “Inglorious Basterds”).  She enjoys:

She appears to share some common interests with Siwon’s dog, so I thought she would be good to ask about this important issue, however there was a significant stumbling block getting in the way of determining a clear answer.  My cat’s English fluency is still a “work in progress”, therefore communication is a problem as Stiglitz is unable to leave a boring, humourless take on this issue in a comments section as effectively as the average k-pop fan.  To navigate around this language barrier, I devised a simple unbiased test with lickable objects.

Here is a rock that I own.  This is a lump of stone with opal embedded into it, my father picked this up back in the days when he was an opal miner in Coober Pedy, which is a small town in South Australia’s huge expanse of inland desert.  Opal is a very valuable gemstone which is used to make jewelry for rich people like Asian Junkie who can’t pay his hard-working authors advertising revenue but can afford $2000 for baseball tickets.  Opal will be used in this test as the “yes” vote.

Here is another rock that I own, that my father also picked up back when he was an opal miner.  This is a crystal called gypsum.  Everywhere in the opal fields in Coober Pedy, you can also find this rock.  Gypsum is a very brittle crystal and nature created it using similar geological forces which produce opal, however unlike opal, gypsum is not valuable at all.  The crystals have a slight transparency like opal does, but they are also kind of dirty and ugly like Asian Junkie doing digital blackface.  Nobody wants to make jewelry for rich American bloggers out of this crappy crystal shit that looks fugly and falls apart as soon as you touch it, so the residents of Coober Pedy leave it in the ground or sell lumps of it as “pet rocks” to local tourists for $3 each.  Gypsum will be used in this test as the “no” vote.

Stiglitz, being a cat with a fairly extreme language barrier, is not yet up to speed with the financial system and the above basic facts about South Australia’s opal mining industry.  As a result, she doesn’t realise the difference in monetary value between these two objects, to her these are just two lickable rocks of different colours and textures.

I placed the two rocks in front of her to see which way she would vote on the important issue of Siwon’s dog.  A “yes” vote means that Siwon’s dog should be euthanised for the safety of others.  A “no” vote means that we should show compassion and let Siwon’s dog live.  In order to get Stiglitz in the mood as well as to help make it clear what was being discussed, I made sure that a hot Super Junior track was playing during the test.  I was also careful to place the two rocks down quickly at the same time so she wouldn’t be attracted primarily to a particular rock due to movement (things moving is very exciting for cats).

Immediately Stiglitz moved to the “yes” rock and I thought that this would be a certain “yes” vote as Stiglitz was drawn to the sparkling opal.  However over time Stiglitz took great consideration of the “no” position, nudging and licking the gypsum and even breaking a piece off to play with.  Eventually she stopped the test after a clear dialogue of “yes, no, yes, no, yes, no, let’s push these together and break off a bit of this one, playing with this bit is fun, okay I’ve had enough now where is food”.  As Stiglitz is an Australian cat, this would indicate a clear position of “yeah nah“.

Hopefully this clears up this important issue for all Kpopalypse readers!  However if you’re still confused, here’s a bonus video of Stiglitz reacting to Siwon’s apology.

12 thoughts on “Kpopalypse asks: should Siwon’s dog be put down?”