Kpopalypse Plagiarism Fun Times is back to tackle the big issues in k-pop!  This time we’re taking a look at Seventeen’s plagiarism controversies!  Are Seventeen guilty of horrible plagiarism crimes?  Read on to find out! 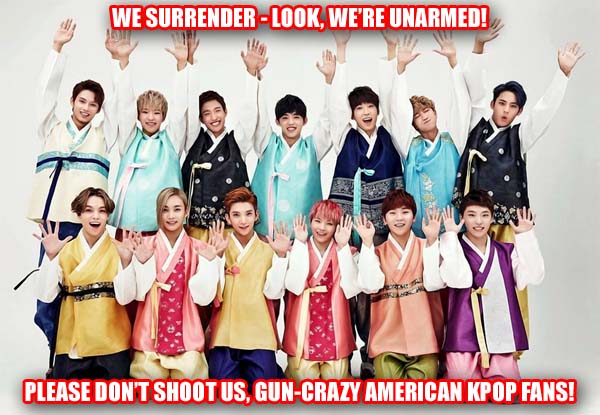 Everyone wants to know the answer to this important question:

Before we get into the plagiarism, it’s probably important for you to get a picture of what I think of Seventeen in general.

What do I think of the songs?  “Don’t Wanna Cry” is typical trendy nonsense in 2017 and definitely isn’t great or even good, but is still probably slightly better than nowhere bullshit songs like “Smile Flower“, “Highlight“, “Adore U“, “Pretty U“, “Boomboom U“, “No U“, etc.  Seventeen’s songwriters stick to fairly basic well-established boy group songwriting conventions and while this stops anything they’re doing from being truly horrible, it also prevents any of it from being particularly exciting or interesting in any way.  It seems to me that Pledis are playing it musically as safe as possible with Seventeen, and giving all the weird oddball shit to their new girl group Pristin instead.  Don’t get me wrong, I wouldn’t say they have good songs with Pristin either, in fact on average for me Pristin’s songs are worse than Seventeen’s.  However Pristin if nothing else do actually stand out musically (albeit for the wrong reasons) whereas the only thing that stands out to me about Seventeen is they’re proof that the “Pledis is broke” meme is a bunch of bullshit and their agency is actually swimming in money.  I don’t hate them, but I also don’t see what all the fuss is about… I guess it’s because there’s thirteen of them (for now) and people find them cute or something?

So what do I think of the guys?  I don’t think of the guys, in fact I can’t even tell any of them apart, I don’t even know their names really.  I know one of them is called S.Coups and I think S.Coups is a really bizarre name for a guy to have so that’s kind of funny, hey expectant parents why not name your next baby S.Coups just for laughs and so you can get time off work for parent-teacher meetings when they inevitably get picked on in school for their stupid name.  Don’t ask me to tell you which one in the group S.Coups is though.  Seventeen are also a bit visually notable because they have that Visual Kei sort of thing where there’s that one guy in the group who sometimes looks like a girl, I don’t know if that’s S.Coups or one of the others though.  I always like it when boy groups have girlish members and vice versa just because of the reactions it always creates from people who can’t deal with it.  David Bowie wore a dress in the 1970s, we should all be used to pop musicians looking incredibly LGBITQABCXYZ by now, but people still get their tampons in a twist about it in the k-pop fandom on a daily basis which is hilarious.  If Seventeen are adding 0.1% to that general category of fandom butthurt then they’re alright by me.

Anyway now that you have a full picture of exactly how much bias you can expect in this article, let’s move onto the plagiarism accusation.

Seventeen plagiarism accusation #1: Seventeen’s “Don’t Wanna Cry” plagiarises The Chainsmokers and Coldplay’s “Something Just Like This”

So what are the similarities between these songs?

There’s also a lot of things which are not similar about these songs:

However it doesn’t matter of the songs are mostly different, if part of it is similar enough to be called plagiarism, so is it?  I’ll try to write this out without actually using any music notation which might confuse non-music readers.  This still might be a bit confusing to some though but I’ll do my best to explain it without getting too deep into technical shit.

Firstly, that riff.  The Seventeen version of the chorus keyboard riff (first appearance at 1:00) has the basic harmony of VI – VII – i, which is expressed in the song as Bb – Bb/C – Dsus2.  The Chainsmokers/Coldplay version is in the same key but the chorus (first appearance 1:05) is D/B – D/C# – D and then back to D/C#, which is really vi-vii°-I-vii°.  They’re pretty similar, but Seventeen’s version is in D minor key where Coldplay use a D major key.

The rhythm of both parts is also different.  If we were to quantize the rhythm of both into sixteenths, so we can put them one on top of the other and compare rhythmic differences, here’s what we get:

I’m ignoring the two different keys here to highlight the difference rhythmically.  The hyphens denote silence and the fullstops are where the synthesisers in the Seventeen song do a weird stuttering staccato thing instead of playing the chord fully.  The Coldplay song doesn’t do any stuttering synth thing because it would probably be too much excitement for a group as boring as Coldplay to have something like that in their song.

So the riff is similar, but not the same.  What about the second issue, which is the chorus melody?

Seventeen sing F G A C G F, and then throw in a couple eh eh at the end.  Chainsmokers/Coldplay do D F# E E E D D, which is actually pretty different, and they actually come in deliberately a little late with the last couple of notes (the words “like this”) to stretch it out a bit more.  They also sing the chorus half as often, leaving more space for the riff to play which Chris Martin presumably uses to fetch Gwenyth Paltrow some wet wipes.  Superimposing the melody over the rhythm we already have, and once again ignoring the difference in key plus any sharps/flats (because they mess with the quantisation of Notepad) we have this:

So as you can see, even ignoring the fact that one song is in a major key and the other in a minor key, and thus pretending that the general melodic scale is intervallically the same which it isn’t, the songs aren’t objectively that similar even in their most similar portion.  However they do sound similar anyway, which is because of the similar phrasing and that similar keyboard patch which has been used.  There’s no doubt that Seventeen’s songwriters have at least used the Chainsmokers/Coldplay song as inspiration (pity them), and it’s a common practice for k-pop songwriters to do this with western songs, but it’s definitely not a direct copy.

So the big question, why the hell did Pledis just buckle and give part songwriting credit to The Chainsmokers and Coldplay anyway, instead of just saying “they’re not the same?”.

Basically it says this:

That seems pretty clear and is actually quite sensible.  Don’t worry fans, Pledis only have the best interests of Seventeen at heart.  You can trust them.

But wait, there’s more!  Whenever there’s one lame copying accusation, there are always more close by.  Here’s some NCT members with some water guns. 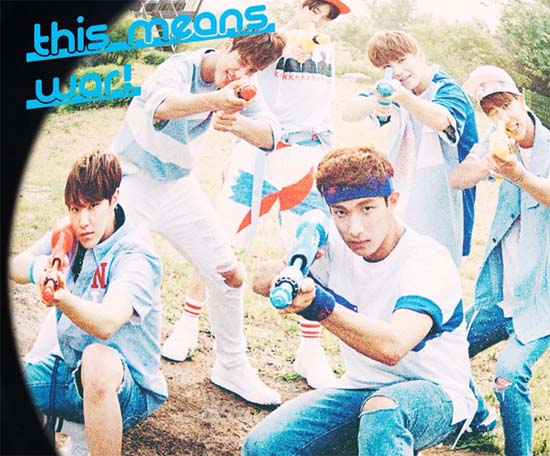 Yes, someone seriously brought this up as plagiarism.  I guess it’s true that both groups of guys are holding water guns, but I’m not sure how you’re supposed to have a water fight when only one side has water guns.  Maybe what we need is water gun control so neither side can have water guns.  I’m sure it would never happen in crazy countries like the USA where you can buy water assault rifles from Walmart, but Korea might be able to make this important societal change happen.  I know, it’s a big restriction on personal freedom, but I think that if just one person is saved from an unwelcome soaking, it was worth it.

Readers are no doubt going to think I’m just making up these accusations randomly but people did actually complain about this.  I guess tough shit if both Seventeen and EXO members went to the same school.  By this logic, I should be able to sue anybody who went to school after I did… oh wait, I never actually wore my own school’s uniform.  Damn, what a missed opportunity to rake in some cash, if my teachers told me back in high school days that I could just sue anybody who wore the same uniform as me I’d be a millionaire by now.

Obviously these people reaching for ways to take Seventeen down are just clutching at straws because some other group is their bias group instead.  But that doesn’t mean everything is fake.  It wouldn’t be an episode of Kpopalypse Plagiarism Fun Times if this post now didn’t end with a case of actual plagiarism:

Come on Seventeen, you should know better than that.  Both Seventeen and all readers should take the lead from the guy on the right hand side of the German image.  That guy isn’t going to go along with the crowd just because it’s trendy.  He doesn’t give a fuck about what’s cool or what his friends are into, he’s a true caonima and makes up his own mind.  If he made it out of wartime Germany and is still alive today and got a chance to read about k-pop online, he’d probably be reading Kpopalypse blog and not some trendy bullshit like your dumbass friends who are too scared to expose themselves to anything online which might rattle their cage of delusion or at least make them think differently.  Thanks for reading and supporting Kpopalypse blog, Kpopalypse will return soon with more posts!