It’s time again to delve deep into the paranormal mysteries of k-pop vocal analysis – yes that’s right, The V Files is back!

PREVIOUSLY, ON THE V FILES…

The previous episode of The V Files was dedicated to vocal rankings, and assessment of k-pop vocals.  It was revealed that the standards used to measure k-pop vocalists by the k-pop community may appear objective but the criteria are actually borne from completely subjective cultural perspective, have no relevance when combined with today’s vocal reproduction technology, and therefore are meaningless in any sense other than personal taste.  An alternative method of assessing vocals on “uniqueness” was offered, but only as one equally subjective possibility out of a potential of endless alternatives.  Like many of the preoccupations of k-pop vocal analysis, the “scale of vocal quality” only makes sense in reference to itself, it has nothing to do with the outside world.

K-pop fans are full of concern about the perils of “vocal damage”.  If k-pop singers are singing incorrectly, they might be at risk of losing their golden voices soon!  Oh gosh no, how horrible!  What do k-pop vocal experts have to say about this important issue?

What do k-pop vocal analysts believe is the danger to k-pop singers?

You don’t have to go very far to find lots and lots (and lots… and lots…) of concern about k-pop singers and the precious vocal cords.  Let’s take Rose from Blackpink as an example, because everybody likes to be concerned about her lately.  The below people seem awfully worried that Rose from Blackpink could cause herself some kind of vocal damage (from this article): 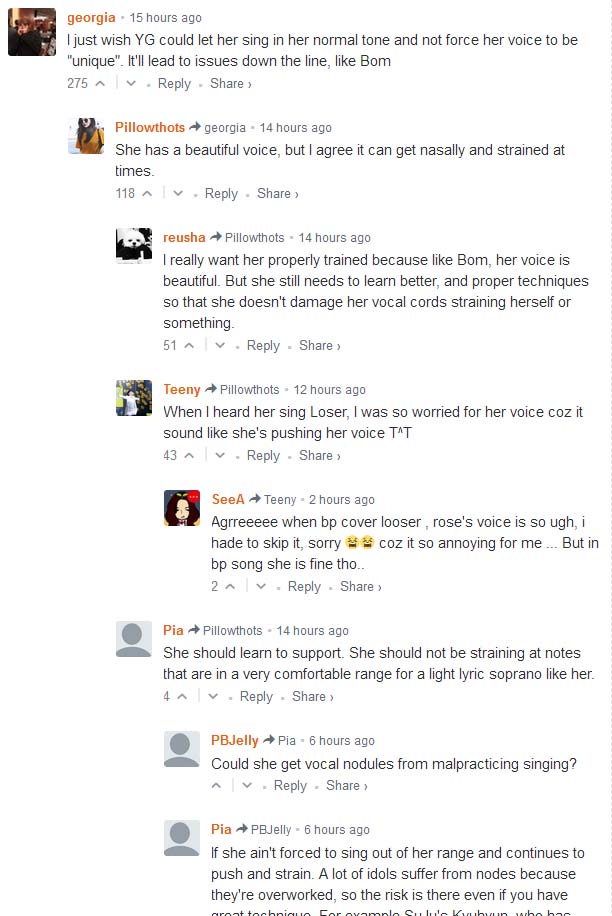 Gosh, should we be concerned?  Here’s some more “concern”, where the comments go slightly more in-depth (from here):

Not enough for you?  Let’s go with some more incredibly concerned comments (from this article):

And so on (and on, and on).  This is just stuff pulled from just one website over one week.  You can find more examples of people leaving dumb comments about Rose on articles yourself, you shouldn’t need me to help you with this.  The popular vocalfag theory regarding Rose seems to be:

Of course, the people commenting don’t give a shit really, they just want to appear to be concerned so they can get Internet points, a righteous pat on the back from their peers for identifying a problem and a possible solution.  It’s the same kind of psychological motivation that drives so much “social justice” concern – everyone wants to be “that person” who finds the problematic thing and says “hey look!”, because it feeds their ego, and makes their sense of powerlessness about the world just that little bit less severe.  However, let’s give these folks the benefit of the doubt, assume just for the sake of argument that these oh-so-concerned net-jockeys actually do care for the right reasons, and ask:

So, is there really a danger to the voices of k-pop singers?

Well, there is a thing called “oversinging“, which is apparently a real thing, but isn’t very specifically defined.  When I personally have talked about “oversinging” in the past usually I’m referring to a singer filling a song with endless fucking runs and other vocal wank and basically shitting on the song’s melody for the sake of their own ego.  However in the case of “oversinging” as a “singing health” term, we’re talking about something roughly analogous to “straining the voice”, which can apparently lead to something called “vocal nodules”, which sounds gross.  Here’s Wikipedia’s current spiel about vocal damage:

Fair enough.  But there’s something here that seems amiss.  Pavarotti, Whitney Houston and Mariah Carey apparently all have developed vocal nodules, and these are people who are held up by the faggiest of vocalfags worldwide as the gold standard in singing technique.  This doesn’t fit the vocalfag narrative that it’s somehow bad technique that causes vocal damage, because if that was the case, the technically “best vocalists” in popular and classical music definitely shouldn’t have any.

So what does cause vocal nodules?  According to the above quoted passage, “professional singers on extended tours with tight schedules run a substantial risk of damaging their voices unless they make sure to rest the vocal cords and get enough sleep and proper diet”.  The symptoms are also referred to as “vocal fatigue”.  So maybe it’s not so much about the technique used, and perhaps it’s more about how much you sing, versus how much you don’t sing.  The evidence suggests that technique doesn’t matter, and that it’s the mere act of singing itself which can produce them, in some people, over time.

No mention here about how some techniques are worse than others.  Singing is classed as “vocal abuse” and can cause vocal nodules – period.

Now let’s bring k-pop groups into the mix.  K-pop groups are definitely known for their crazy schedules, but… how much of those schedules actually revolve around singing?  It’s common for groups to do multiple schedules per day, but a lot of those schedules revolve around TV variety show appearances and so forth.  It’s not that common for them to perform multiple live stages per day, and even when they do perform multiple stages it’s often lipsynced, and even when it isn’t lipsynced  it’s usually just one or two songs, a few at most.  K-pop groups aren’t performing 90-minute concert setlists of just their own vocals, night after night for months on end with no breaks the way that touring western artists often do.

The other factor is that in a k-pop group, there are multiple vocalists, and they don’t usually sing all at the same time.  In a four member group like Blackpink, how much is Rose actually singing?

Here’s Blackpink’s latest song at the time of writing.  If the line distribution in the video is to be believed, and also assuming I haven’t mixed any members up, Rose sings from:

Even if Blackpink have to sing this song at five different concerts per day on the promotional trail (which would be an unusually high workload, especially for a YG group who don’t tend to hammer the music shows as much as other groups) then that’s still less than four minutes of Rose using her voice per day.  Your average k-pop performer is definitely NOT going to have significant vocal damage by singing for four minutes per day for however long a k-pop promotional period typically lasts (a few weeks, usually), and most days they probably wouldn’t even be singing that much.  And this is all assuming a consistently busy schedule AND no lipsync or vocal cheating in any way (a big assumption).  In a group with more than four members, obviously the singing load is even lighter.  It’s well-documented (mainly by me) that when k-pop groups are in training and between comebacks they do NOT get trained all that much in singing, so they’re not exactly getting their vocal cords thrashed out in the practice room either.

Even when k-pop singers DO go on the road for concerts, they still don’t stress their voices that much.  You’ve all fucking seen a k-pop concert, at least on video if not live.  You know how they go.  They’re either really short ripoffs that go for about twenty minutes tops, but even if they are the real deal two-hour extravaganza, here’s what happens:  A few songs with the members all divvying up the vocals in the verses between them and the choruses being mainly lipsync, then about five minutes of standing in a row talking to the audience and being really polite.  Then a few more songs, as before.  Then each member gets a few minutes to do something on their own while ALL the other members rest.  Then a break.  Then they all come back out and do a few more lipsynced songs.  Then another break.  Then an encore where they usually sing the same songs again (what the fuck, but anyway).  Grand total amount of time your bias spent actually making musical notes come out of his/her mouth in front of a microphone – about fifteen minutes, if you’re lucky, but usually a lot less.  Taxing on the vocal cords – I think not.  And how long do these concert tours go for?  Not that long, most don’t even have much more than half a dozen dates before everybody has a big old rest.

Conclusion – Rose won’t lose her voice.  Neither will Bom.  Neither will anyone else in k-pop, unless they were destined to lose it anyway, for reasons unrelated to whatever vocal technique they may or may not be using.  Final word:

If the guy from Cannibal Corpse still has a voice after doing THAT for over an hour every night on the road for months on end for over a decade, and still sounds exactly the same now as he did in the 1990s, your precious k-pop idols have nothing to worry about.  Trust me. 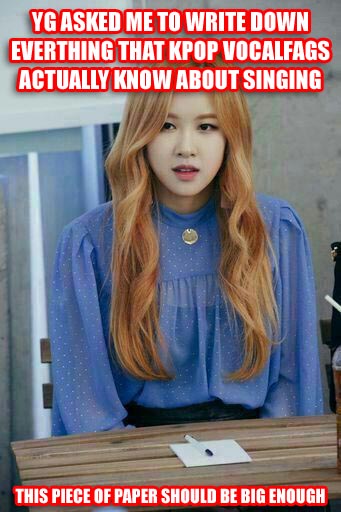