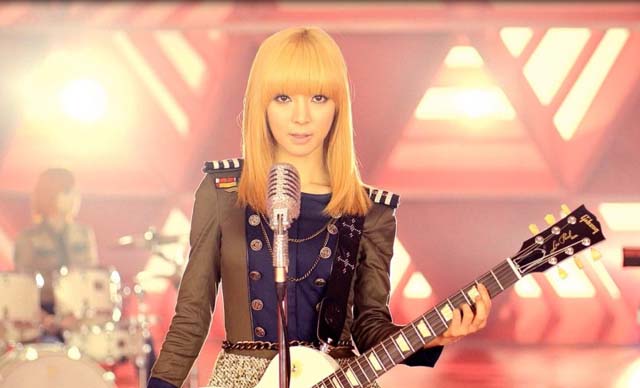 It’s not bad I suppose, but I must say some of these guys are doing quite well in the latest Kpopalypse objectification survey.  You’ve got a few more days to fill that out by the way, so if you haven’t participated in the glorious pasttime of objectifying k-pop idols yet this year, get on it and click here to participate!

I think Nine Muses’ agency has just given up on them and is now just like “fuck it, these girls will never make money, let’s just do whatever we want”.  I approve of this attitude as it tends to generate better music than “let’s ride every shitty dicksucking pop trend at once” which appears to be the modus operandi of most k-pop comebacks in general.

Mamamoo – Yes I Am

Producers are now so embarrased for riding the tropical shithouse trend that the melody is now reduced to one occasional small squirt of a note.  It’s like this song is apologising for existing.

Korea’s Rick Astley is back, except that he now thinks he’s Korea’s Soulja Boy.

Blackpink – As If It’s Your Last

This is the song that comes out when you find the keyboard that Teddy uses to write all his songs on and press the “demonstration” button.

Skull’s reggae isn’t really very good but it’s just amazing that he exists at all, really.

Jinsoul – Singin’ In The Rain

I started listening to this and thought “what the fuck is this shit there’s not even any song here”, then I realised my headphones were half out of their sockets and it was cutting out all the bass.  Once I plugged them in properly the song then didn’t sound too terrible, but it aptly demonstrated that this is a song where the appeal is definitely 95% production values, 5% actual music.

Love it how he’s trying to look all rebellious yet this music is weak as piss.  If you really want to be that much of a rock singer, maybe try featuring your actual band in your videos.

Mamamoo’s other song is shit of course.

Is it Beenzino’s mission to feature on every worthless piece of shit song nobody wants to listen to ever, because if so he’s making some serious headway in achieving that goal, which I suppose is kind of admirable even if his music certainly isn’t.

This is what BigBang ballads sound like with no money.

This is what no money ballads sound like without a big bang.

Nick & Sammy – Baby You Love Me

Actually let’s just be friends.  And by “friends” I mean “don’t call me, I’ll call you”.

I know Koreans think driving footage in these karaoke style lyrics videos is kind of relaxing but the truth is that we all just think of Ladies Code and wince every time they take a blind corner.

Yeah this is pretty shit and we get to watch two dorky guys in the video instead of Stella Jang, thanks for nothing cunts.

Crash would go into Nugu Alert, but they’re not nugus in any sense.  Crash are a veteran Korean thrash metal group who have been around since the 1990s.  One of the first groups in South Korea to become well known playing metal, they were also at the forefront of trying to get this style of music and its cultural accoutrements (long hair on men, mosh pits, stage diving) accepted in such a conservative country.  Your idol’s weak dating controversy has nothing on what these guys went through.  You know they’re hardcore because they don’t care about OH&S compliance and are happy to throw electrical cables everywhere on the floor where soft weak pussy k-pop fans might trip while running away from their overdriven amplifier stacks.  Badass.