Every day it seems like another Korean pop idol is doing Frenchface.  When will k-pop idols learn? 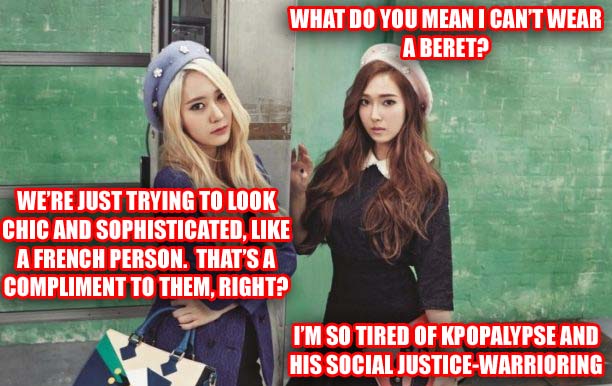 We’ve all seen it – k-pop idols wearing berets and hanging out in cafes, posing with antique furniture or standing around on rustic-looking street corners to give that “I’m a French person in Paris being all French and stuff” vibe.

Above is a picture of the always-problematic Mamamoo, forever in trouble for some insensitive action. Look at those bitches grinning. God they love being racist – but they’re far from the only ones!  I know what you’re thinking:

Rest assured that it doesn’t matter:

It’s still offensive and you should stop doing it.

It’s incredibly offensive because it is a caricature of a French person, meaning it exaggerates the French form to reinforce racist perceptions. Historically it has been used to perpetuate the fallacy that the French are an inferior beret-wearing cafe-frequenting too-lazy-to-go-to-war race, when in actual fact they don’t wear berets much at all and have the most batshit insane fighting force in the western world. 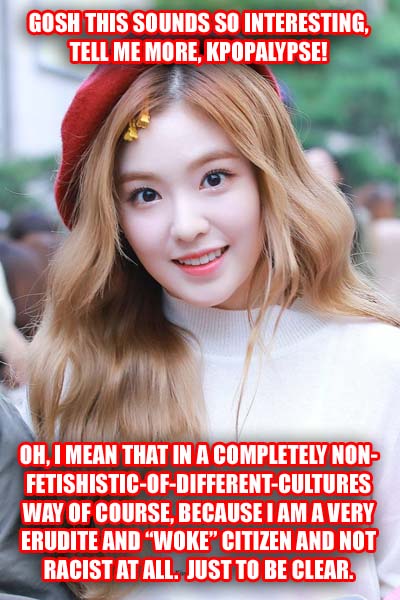 Starting in the early days of cinema, non-French actors performing in movies would wear berets and hang around in cafes to impersonate French people and act out these racist stereotypes of French people. These movies were enjoyed by non-French people who wanted to dehumanize French people so they could continue to view and treat them as less than human. 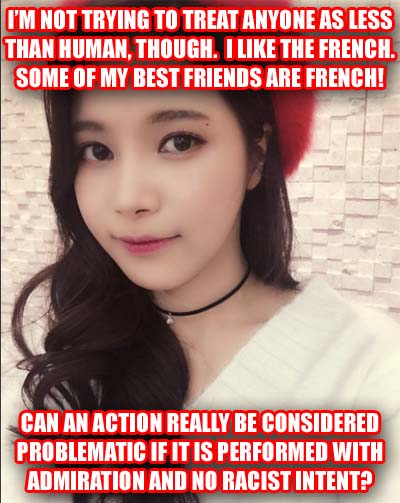 It is impossible to separate Frenchface from its history of French oppression. Those who decide to wear Frenchface are disregarding the sensitivities of a group of people who have been marginalized for centuries.

Telling an oppressed minority group not to be offended by your actions is an act of privilege. French people do not have the privilege or the ability to forget their painful history of getting their asses kicked by the Germans in wars twice in the last century, but non-French people, as a member of the majority in the world, claim the privilege to ignore this complicated history out of convenience.  Embracing the chance to mock, dehumanize, and to dismiss the feelings and demands of others, all while re-imagining history so that only things you deem wrong are wrong, is a pretty great way to perpetuate a racist society that treats French people like crap. 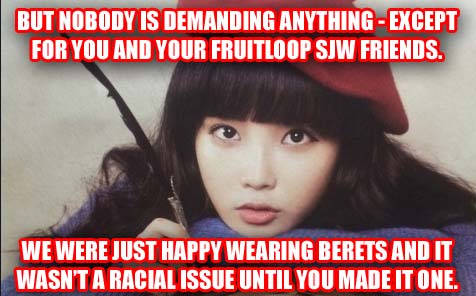 LOOK FRENCHFACE IS RACIST… JUST BECAUSE, OKAY?  NOW STOP IT!

Okay, look… I’ll be honest.  When I was younger… I was really racist and would make racist jokes about French people in school all the time. In home group in class I’d wear a fake moustache and act like I was sipping a coffee or something and put on a fake French accent while we were waiting for the teacher.  The whole class laughed at the time, and we all thought we were being hilarious, but since then I became all “woke” and stuff and now I realise that what I did was wrong.  Of course I can’t change it now, but as a born-again “woke” person, by being really strict about this stuff online maybe I can morally compensate for my previous personal shortcomings.  After all if I die and I’ve done more non-racist things than racist things, doesn’t that mean that overall I’m not a racist?

I just want to be a good non-racist person!  How do I redeem myself?  Please tell me!  This is important!  Hey, where are you going?  Come back!