It’s the return for the first Kpopalypse Nugu Alert of 2017!  Let’s check out some more Korean nugus! 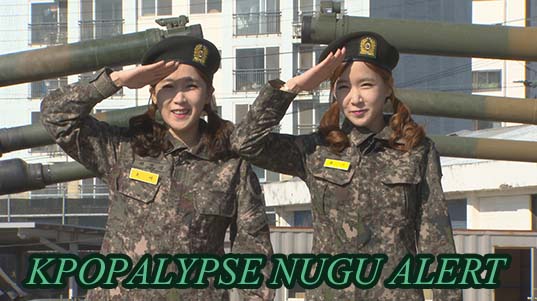 I’ve been saying for ages now that while k-pop has well and truly outshone its western equivalent in terms of song quality, willingness to experiment with styles, visual presentation and marketing flair (not that that’s difficult with the overall quality of western pop productions lately), Korean rock is still lagging far, far behind in all of these aspects.  The main quality difference between Korean and western rock, at least to my ear, is that Korean rock just doesn’t rock very much.  This was highlighted to me strongly last week when Dreamcatcher’s new song out-heavied everything else in the spectrum of my roundup, as well as just about every high-profile rock song from a Korean rock band that was released over the last few months, eclipsing many Korean rock bands both old and new.  The entire history of k-rock just got its ass well and truly kicked by a bunch of girls in dresses who don’t even play instruments, and these limp Korean rockers should feel appropriately ashamed to call themselves rock bands at all.

Clearly, Korea needs a lesson in how to get heavy if they’re ever going to rescue their rock bands from the twin threats of Coldplayesque melodrama and coffee-shop warble that are holding the genre back.  Therefore, this episode of Kpopalypse Nugu Alert is dedicated to extreme metal styles.  Here’s hoping that a few more people see these bands and they achieve enough marginal success that a trend starts forming in the direction of metal.  Probably not, but we can dream.

One thing that anyone observant will notice from watching a few heavy metal videos is this – heavy metal guys just don’t have that much money compared to pop stars.  Your average guy or girl in an extreme metal band will tend to blow so much of their cash on their instrument collection that there often isn’t a lot left over for things like making music videos look all that spectacular.  The solution tends to be lots of grimy colours, dark filters and general murky film-noir style effects.  Method have got the metal 101 look correct, and have shot their video in what seems like the basement carpark under the FNC Entertainment building (we can tell it’s theirs because of the jelly stains on the walls and floor) plus they’re sporting the traditional “if it’s not dark grey it’s dark brownish-grey” sepia-tone lighting effects, which you’ll also see repeated here with the other poverty-stricken videos on offer.  However the singer seems a bit non-committal when he’s miming the song and the overall vibe as a result is more like Lucifer-era Taemin picked up a guitar and started noodling around rather than a legit metal band on their fourth album or whatever.  I’m not sure how well the result works, but at least this song has Flying V’s correct and present plus some seriously legit guitar solos.

Notable attribute: the singer hasn’t trimmed the string ends on his guitar’s headstock – careful, you could poke someone’s eye out with that!

One of the great things about being a metalhead in the late 80s is that before the different schools of metal vocal were formalised, there was actually more than one style of traditional guttural extreme metal singing.  There were groups like Metallica and Slayer who had a rudimetary singing style of vocal, but more extreme groups had all sorts of different styles.  Sure, there was the Cannibal Corpse/Napalm Death style growl that we all know and the black metal high-pitched style pioneered by Bathory which also became widely popular, but there were also plenty of outliers.  Kreator‘s hate-filled screeching and Celtic Frost‘s “death grunts” sounded like nothing else, but perhaps the most bizarre of them all was Mercyful Fate‘s singer King Diamond, who combined a semi-operatic falsetto approach with more traditional guttural metal sounds, achieving the near-impossible and successfully dividing extreme metal’s unusual-vocal-tolerant audience.  Silent Eye reminds me a little of metal’s glory days before too many rules about what was or was not a permissible vocal style were slapped on the genre, and the singer sounds in places like he’s trying to do King Diamond’s “growl” and “falsetto opera” vocal at the same time.  I’m not sure how well the result works, but at least this song has Flying V’s correct and present plus some seriously legit guitar solos.

Notable attribute: this song made me write more about metal vocal in one paragraph than I’ve ever written about k-pop vocal in 4 years of blogging

Of course, it’s 2017 and guttural metal vocals aren’t just a boys club any more.  The flag-bearer of females exploring the joys of extreme metal grunting is probably Arch Enemy, but there are actually shitloads of women in metal groups doing stuff exactly like that now.  Naturally Korea’s musicians have also gotten in on the act, and Manixive’s vocalist explores a variety of styles of vocal delivery, running the gamut from “arrrgh” to “uuuurgh”.  The music here is more of a nu-school approach that the previous songs, but still remains just as heavy and uncompromising, containing qualities unlike those which most people reading this would normally ascribe to Korean music generally.  Of course this is a good thing because exploring the diversity in Korea’s penny-pinching nugus is precisely what Kpopoalypse Nugu Alert is all about, and Maxinive’s pennies do indeed look pinched – the band seem to be unable to afford a good enough looking room to rock in so they’ve just thrown black fabric over the top of anything that doesn’t look like it should, which means just about everything in what was probably the bass player’s mother’s sister’s lounge room.  I’m not sure how well the result works, but at least this song has Flying V’s correct and present plus some seriously legit guitar solos… oh wait there are no guitar solo in this.  Tsk tsk.

Notable attribute: even extreme metal in Korea is not willing to do away with pleated schoolgirl skirts

That’s all for this episode of Kpopalypse Nugu Alert!  Nugu Alert will return in the future with more nugus for you to enjoy!