So far all of the Kpopalypse tabs posts have been beginner to intermediate level.  Not so for this post!  This time it’s IU’s “Love Of B” under the microscope!  Read on and enjoy! 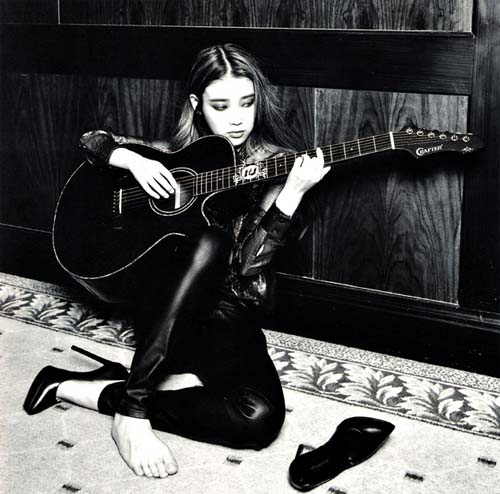 Warning: this post is going to get mad-ass technical.  Hang onto your nuts.

Some background, before we begin:

IU’s “Love Of B” is the opening track from the great “Modern Times” album which is really one of the only listenable full-length albums in all of k-pop.  The reason why “Modern Times” hits such a high quality bar is that the songs on it clearly haven’t been designed as filler.  Most k-pop albums are:

“Modern Times” works much better than your average k-pop album because it’s not randomly thrown together like the above with whatever tracks were lying around, instead it’s a “concept album”.  The concept that unifies “Modern Times” is various genres of jazz, and which I don’t particularly like much jazz, the jazz-lite on the album still has enough pop songwriting discipline in it that it doesn’t spiral off into super-wanky jazz faggot land.

“Love Of B” is a song that is loosely in a style popular in the 1930s known as “swing jazz”, “gypsy jazz” or “hot club jazz”.  All of the guitar playing in IU’s “Love Of B” is by Park Juwon, who has made a conscious attempt to emulate the guitar style of swing-jazz guitar pioneer Django Rinehardt.

Django was the first guitar player to ever become well known from playing truly fast, fluid guitar leads, and even more astoundingly he only had two working fingers on his left hand, yet his old recordings from back then still outpace a lot of guitarists today.  Park Juwon successfully nails Django’s smooth feel on the track, but also increases the speed due to having a fully functioning left hand.  So I guess what I’m trying to say is – we’re about to learn some fairly advanced-level lead guitar, so good luck playing this shit.

The structure of this song is different to most k-pop in that the vocal sections are a verse with a refrain, and there’s no real chorus, which gives away the song’s jazz/blues heritage.

I’m not going to work out chords for this.  Fuck the chords for this song, because that’s not where the action is.  You can probably find them somewhere else if you really want them, but jazz chords in this context all sound much the same anyway, you can pretty much play any old bullshit 7th chords and get by as it’s the bassline that carries the harmony in “Love Of B”, not the guitar.  Instead, from me you’re getting all the lead guitar, because that’s the part that is the most fun and challenging.  Ignore the chords on the below page, they’re not quite right.  The lead on the other hand is correct. 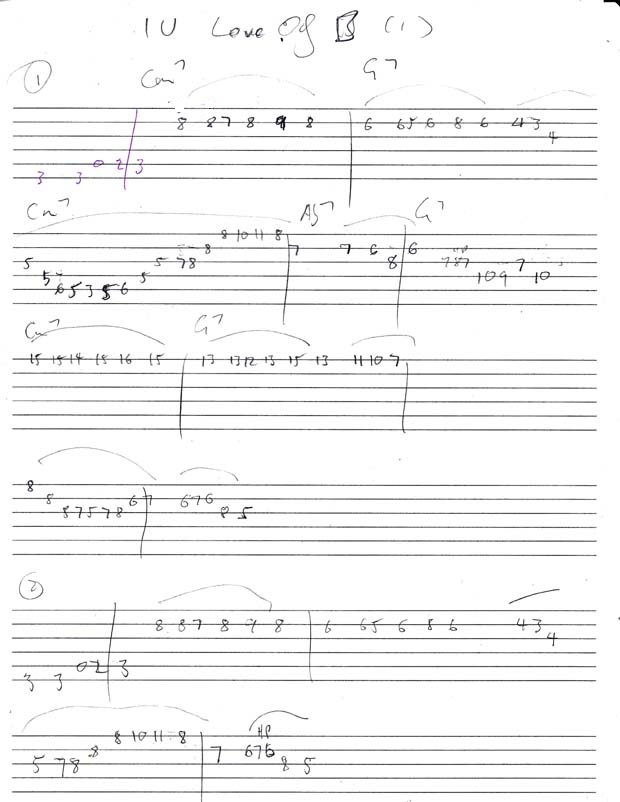 The most important thing to remember about executing the guitar parts is that they’re not strictly alternate picking (each downstroke always followed by an up and vice versa).  Django got his speed and fluency back in the day by sweep-picking his arpeggios (chaining downstrokes and upstrokes together to make changing between strings easier).  It’s certainly possible to play all of it with strict alternate picking but it won’t have the right feel, you’ll sound more like a 1980s shredder than a 1930s jazz player.  Whenever string changes occur in this song try to sweep them to maintain the smoothness.

The last two lines of the above pages are the mini solo at 0:43.  This is really just a cut down version of the intro solo, so if you can play one you can basically play the other. 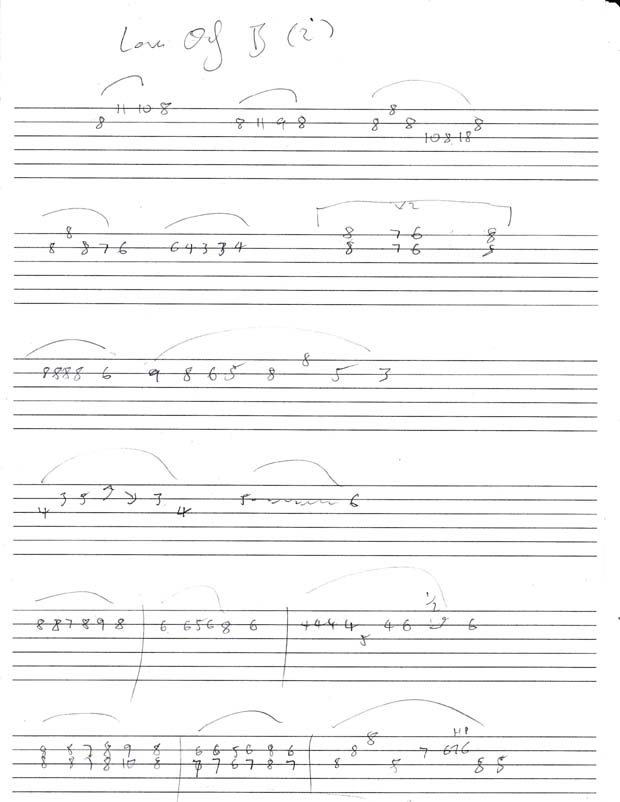 This page shows all the “call and response” lead sections that commence from the second verse at 0:53 and then continue on for the rest of the song in some form.  The part in square brackets on the second half of the second line is the beginning of the bridge at 1:13 (and the song also goes back to here at 2:10).  Note that when I play this part of the bridge in the video, I’m adding a note 2 frets above what is written on the E string, and alternating between it and the note on the sheet, this extra note gives the effect of a minor 9th chord.

The arrows on the fourth line are string bends, and the wiggly line on the fourth line is a tremolo pick because I couldn’t be bothered writing out the exact number of times that note was played.  The fifth line also has a “1/2 bend”.  The bottom line has a double-stop (two lead notes at once) harmony part which I didn’t play in the video but if you feel like doing some double-stops, those are the notes, it’s not too tricky. 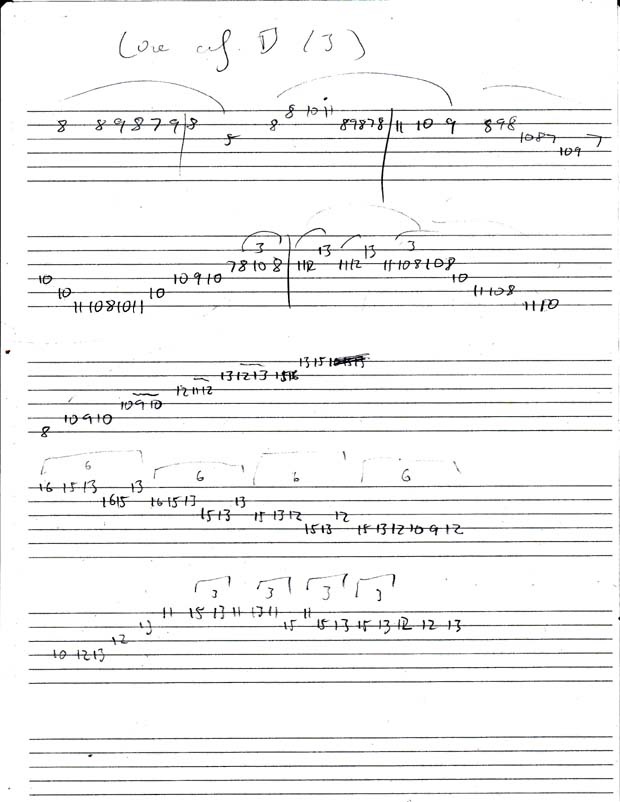 Here’s the crazy solo that begins at 1:50.  The hardest part is easily the fourth line, which I didn’t play that well in the final video either at full speed OR slowed down, although I think I actually got it more correct at full speed.  My playing on the third line isn’t exactly the same as the recording either, I’m playing a little lower, probably one inversion removed.

Note that once this solo finishes, the song then goes back to the square bracketed chords on the second line of the second page and continues from there.  After that, I didn’t write the rest out but it’s all just essentially repeats of what has happened earlier in the piece so you won’t have any problems if you’ve gotten this far.  The ending is just “whatever in C minor”.

The video starts with the intro solo, short solo and main solo all played at about half-speed (so you can see what’s going on), and then I tackle everything at once at full speed.  As usual, I don’t play it exactly right because 1. I fucked up a few bits and couldn’t be fucked re-recording or editing myself enough times to get it 100% right and 2. there’s certain sections where I prefer to “play it my own way” to some extent, (and interestingly, IU’s guitarists aren’t all that good at it live either, Park Juwon probably had quite a few cracks at it in the studio so don’t feel too bad if you sound a bit rusty like I do).  As usual, the video isn’t for me to show off how well (or not) I can play anyway, it’s to help YOU play, because the tabs are a bit hard to follow without some visuals as well.  You’ll need some good economy of motion to be able to get the speed up – try to minimise both your left-hand and right-hand movements as much as you can while playing the faster material.  The song is motherfucking hard as fuck so if you can play this any better than I did in this video, rest assured that you’re good – hopefully this video will help you get there!

For the guitar-spotters, the electric guitar used here is an Epiphone Wildkat, which is a “fake hollowbody” – it has hollow f-holes but they’re just for show as it’s also wood-blocked underneath the pickups, the guitar therefore has no acoustic sound and is essentially an electric guitar only.  The Wildkat is slightly bigger than a Gibson Les Paul but not as big as your usual Gibson and Epiphone hollowbody guitars like the ES-335, Casino, Sheraton etc.  It’s a great guitar for clean playing but it really sounds like garbage when distorted heavily, if you’re a jazz/blues/50s rock player I’d recommend it, just don’t try to use it with saturated distortion because the instrument will just make the most horrible feedback imaginable, and not the good kind.

Anyway, that’s all for this post – have fun attempting this piece if you’re up for the challenge, but if not I promise the next Kpopalypse tab will be something easier! 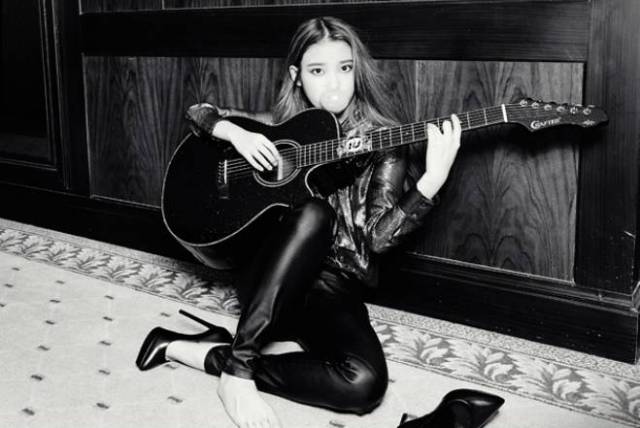 2 thoughts on “Kpopalypse tabs: IU – Love Of B”