Kpopalypse is back to explore unknown Korean artists in another episode of the most eclectic series in k-pop blogging history, Kpopalypse Nugu Alert! 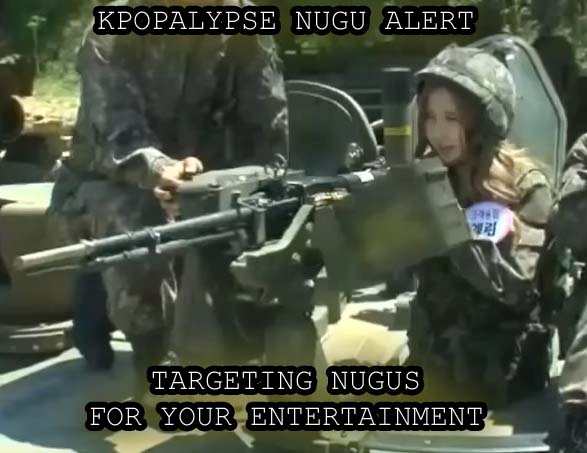 Read on and be entertained as Kpopalypse explores the depths of YouTube to find more music that you’ve probably never heard of!

This episode of Nugu Alert is all about film noir.  What’s film noir?  Well, you could look it up on Wikipedia if you wanted, but Kpopalypse is slightly cooler than Wikipedia, so why not keep reading this blog as I condescendingly write about it for all you knuckleheads?  Film noir (literally “black film”) is a cinematic style that hit its stride in the 1940s (but was arguably in existence much earlier) where film directors would explore darker themes than the norm for the time – and this thematic darkness was accompanied by a similar darkness in the visual palette.  A lot of the early film noirs look a bit fucking pussified by today’s high-tech standards, but the modern “lots of darkness and menace, everywhere, all the time” look that is standard for today’s Hollywood action blockbusters, science-fiction and horror films is very noir-inspired.

Film noir style is often used in music videos.  Lots of faces cast in shadow, strong use of silhouettes, and light often used as a physical entity to obscure the action just as much as to illuminate it are all visual trademarks of the noir style.

That’s fine if you’re History or T-ara, two groups with agencies that have money in the bank, but not everyone in k-pop is so fortunate.  Proper film noir effects aren’t cheap – you either need very good lighting technicians, very good cinematographic tricks, or ideally both, but what happens when you don’t have either?  Let’s look at some Korean nugus and how their music video directors solved (or didn’t solve) the “film noir on a budget” problem.

Film noir is of course very appealing to Korean rappers who always want to look as badass as possible, except when they need to make ballads for cash.  However, it’s hard to get film noir style right – the wrong type of lighting, contrast or post-processing means that rather than getting a cool “dark look”, everything instead just “looks too dark”.  Hip-hop posse Staz Of Man try within their various limitations for a film noir look to complement their actually quite rocking debut song, with varying degrees of success.  The scenes of the guys rapping here look quite good with some effective rear spotlighting shining off the hair and leather jackets and there’s even a bit of CGI which works in context and isn’t too over-the-top, but things get a lot muddier for the interior drama scenes.  The contrast is so maladjusted that the brightly glowing computer screens where Staz Of Man plan their mysterious operation to save hip-hop from Raina’s cardigans are dimmer than their surrounding furniture, and proceedings get so murky that at one stage a bright white cat walks across the frame and is barely even visible at all.  Still, most of this video’s few English watchers probably didn’t notice details like this, as they would have been too busy laughing at the hilarious melodramatic narration that occurs before each verse as a female computer operator pep-talks each rapper with sexy catchphrases like “go pyro on their asses”.

Notable attribute: nobody could work out how to turn the angle grinder on safely at 1:38 so they CGI’ed in fake sparks despite having all the equipment right there to create sparks in real life

Jaywon Jung isn’t really all that nugu in the grand scheme, he’s a session guitar player and singer who does a lot of backing track recordings for other artists (if you’re interested check out his Sketchbook appearance where his extensive resume is discussed) but he’s probably still fairly nugu to most k-pop fans.  He’s here in this episode to show that film noir isn’t just for rappers, and Jaywon Jung’s cruisy and somewhat dull Carpenters-esque song is a lot lighter and breezier than the standard hip-hop fare.  However the video sure isn’t much lighter, with the ultra high-contrast figures of the street dance performers placed against the almost complete pitch-blackness of everything else.  Every now and then the performers are allowed to fade into the blackness a bit and this is used to cheat a little and give the impression of a “one-shot” video as well as add some of the usual trademark scuzzy obscuring film-noir effects, like double-image blur and massive amounts of bloom on everything.  This is good because it’s nice to get some contrast going, as the interpretive dancing or whatever the fuck it’s meant to be that’s going on here is pretty boring and certainly benefits from the visual help.

Ever since my interview with ex-MBK rapper Naino from Nutaz (previously featured on Nugu Alert), I’ve been watching his hip-hop crew Crimp closely.  I’m not sure when Sims entered into the Crimp fold but he doesn’t disappoint, rapping over a rocking beat which is probably one of the best hip-hop tracks this year, not that that’s saying much.  (EDIT: figured out the connection, it’s producer Clams who is part of Crimp.)  The video also displays some nice budget-noir effects, with are mainly just cinematographic – careful street-light and zoom positioning compensates for the fact that these guys don’t really have much going on in the way of light kits.  There are a few static VCR-style effects to break up the visual proceedings however, but I guess that’s as far as the budget went on this one.  Sims hasn’t taken Korea or the rest of the world by storm yet (perhaps it’s his completely unwebsearchable name that’s giving him issues) but clearly, these folks could use our help.  Everyone do your part as nugu fans and make sure to share and spread this one, I want this guy to get fame and an offer of a place on a future season of Show Me The Money just so he can brag in an interview with me later about how he turned it down.

Notable attribute: synchronisation of the middle finger, the word “fuck” and the higher than usual bassnote at 0:44 probably the greatest moment in Korean hip-hop to date

Nugu Alert Rating: off the chart 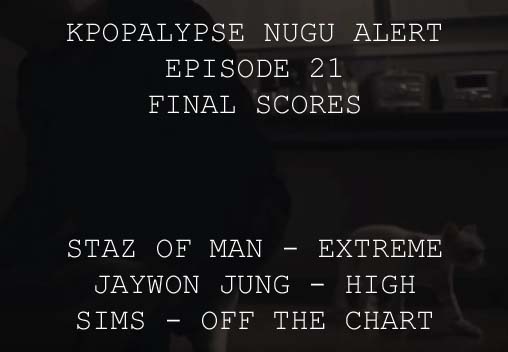 That’s it for another episode of Kpopalypse Nugu Alert!  Kpopalyspe will return at an undisclosed time in the future with more nugus!