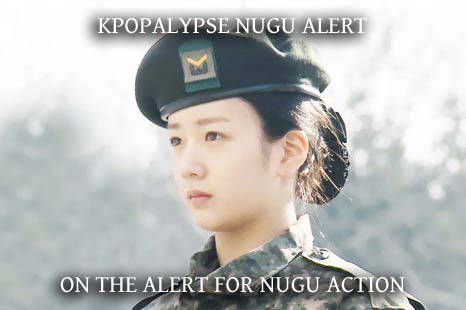 Come with Kpopalypse once again as he explores the depths of Korean nugudom for your entertainment!

After the extremely positive reaction to Hexagonal Water’s “Adduddu” in Episode 19 of Kpopalyspe Nugu Alert, I thought you guys might enjoy an episode entirely devoted to Korean trot music!  Or maybe you’ll hate it, which will be hilarious!  Either way, here it is!

So what is trot music anyway?  Korean trot is an early form of Asian “traditional” pop music, of which there are similar derivatives in Japan and other Asian countries.  The word “trot” is derived from the word “foxtrot“, a western dance style that originally accompanied ragtime music, but the Korean trot music that we know today doesn’t have much in common with music that people would foxtrot dance to and is more heavily influenced musically by the more commercial end of pop music that was prevalent in the US in the 1950s and 1960s.  I’m not talking about stuff like The Beatles and The Rolling Stones or even Elvis Presley (all considered “rebellious anti-establishment rock music” back in the day) but rather the very commercial end of 50s and 60s bubblegum pop style that has been largely forgotten.  Korean performers of the day absorbed and replicated the style of trending western commercial pop hits in order to help increase their popularity with American soldiers stationed in Korea, which then in turn influenced the genre overall, making Korean trot a more westernised form compared to its Asian counterparts.  The result is that Korean trot heavily favours the western diatonic major and minor scales and has similar harmonic rules to the blues and country music (predominance of I, IV and V) that was the musical ancestor to America’s 1960s pop hits.

Korean trot has also evolved some other stylistic quirks, such as bold brass stabs bookending the verses and choruses, these usually being played on a keyboard rather than actual brass instruments.  Drum machines and synthesised bass are also common, making trot the perfect music to recreate on an arranger keyboard, although plenty of trot songs with live drumming and bass guitar also exist.  The other common instrumental element is electric guitar, which is frequently distorted, as sustained lead guitar sounds are used liberally to reinforce melodies.  On top of all this is the singing which tends to conform to fairly conventional phrasing characteristics, with vocal phrases usually lasting two bars and containing predictable, regular gaps.  Visual presentation is generally quite formal favouring classy suits and dresses, dancing tends to be rudimentary rather than technical, and backing dancers in MVs and live stages (when present) are more commonly mixed gender to the performers instead of the same gender, the opposite to the norm for idol pop.

If the above doesn’t make much sense, don’t worry – watching some examples will certainly help, so let’s get down to it!  As usual, regular Nugu Alert rules apply:

There’s benefits to being a nugu solo trot singer.  One of them is you get to shoot outdoor scenes in busy places without the need for a security detail or cordoning off streets.  Lim Sehoon walks happily through the streets of downtown wherever in “Oh My Love” and doesn’t get bothered by a soul, so I think it’s pretty safe to say that he’s as nugu in Korea as he is everywhere else.  However he also makes a point to explore the lush Korean countryside, as well as practice his dance steps with his backing dancers in the interior of a room which looks like it might be the shower block from Project Luhan.  Star of the show however is definitely Lim Sehoon’s shoulder-slam judo move, deployed in the chorus to accentuate the punchy rhythm and let the viewer know that even though he looks about 18 years old with all that BB cream and pink lipstick, trot singers are tough on the inside.  After all they’ve had to watch the gradual global rise of idol pop leave them behind, they know what it feels like to do the hard yards in life.

Kim Keunsan mixes up his trot music with a slight ska feel in the interludes before the first and second verse, and it’s definitely a nice change, but a shame that the song doesn’t carry that flavour for a little bit more of its length, as I think a full ska/trot song is something we need.  Musical style is not the only thing that he mixes up however – I watched this video quite a few times and I’m still not certain if the guy in drag is actually Kim Keunsan himself deploying a bit of double-up camera trickery, or just someone else blessed with remarkably similar features.  Whatever the case, both of them certainly look like they’re having a good time, and you can see what appears to be Kim visibly trying to hold back his own laughter in several takes.  There seems to be some kind of story being told in the video but I can’t really work out what it is, other than it probably has something to do with karaoke and flashing belly buttons, but I don’t really care and when you’re watching this utter madness you won’t either.

Notable attribute: “female” protagonist brazenly waves a large bag of weed at 2:49 in solidarity with idols going through drug scandals

Trot isn’t always played for laughs however – sometimes it’s time to get serious, and not many trot performers reach a greater level of seriousness than Kim Soonju in “Inclement Rain Falls At Night”.  Kim Soonju gives off the aura of an old-school veteran of the trot scene, however her videos don’t seem to have millions of hits or a huge international following, which I find to be strange.  What’s even stranger than this is the inappropriately fast editing which unlike other crimes against the retinas like T-ara’s more heavy-going videos isn’t even noticeably synchronised with the music’s beat in any way, making each individual cut even more jarring than it would otherwise be.  Add Kim Soonju’s bold fashion statements into the mix with some tasty grain film effects and fade-to-white dissolves straight out of Windows Movie Maker, and you’re in for one hell of a visual rollercoaster ride, and that’s before you even get to the music which adds intense vibrato and traditional Korean instruments into the lushly orchestrated trot mix.  Thank me later.

That’s all from Kpopalypse for this edition of Kpopalypse Nugu Alert!  Kpopalypse will return with more nugus at a future date!