It’s time for another episode of Kpopalypse Plagiarism Fun Times!

These links might be helpful if you’ve never read anything that I’ve written about plagiarism before.  Once you’ve read them, continue as we discuss

Firstly, what do I actually think of them?  Or in other words, how biased am I?  Firstly, the songs:

“Rough” is really good.  “Me Gustas Tu” is pretty good.  “Navillera” is also decent.  “Glass Bead” is by far the worst feature track, fairly boring.  Nothing of theirs is truly horrible (as far as feature tracks go), but they tend to do the same thing with only minor variations anyway so they’re not exactly taking a lot of risks, their songs so far are four versions of pretty much the same thing.  Gfriend are the Brian Johnson-era AC/DC of k-pop churning out basically the same shit constantly and that’s fine, it’s k-pop not some up-the-ass trendy bullshit music that 18 year olds with big bushy beards and one-speed bicycles listen to.

Do I like the girls?  Umji has coveted status as 2016’s “no reason” sidebar girl, which of course means that the answer is “mu” (무).  Mu as a response loosely translates to “no thing”, which doesn’t mean “no”, nor does it mean “yes”.  It’s the absence of both “yes” and “no”, the suggestion that the true answer lies outside of these boundaries, so the literal meaning could be translated into Australian as “shove your simplistic false dichotomy up your cunthole” (perhaps using Eunha’s jaw as a wedge to get it as far up there as possible).

Now that we’re all thoroughly confused, let’s move onto the plagiarism accusations:

It’s true that the two songs do sound alike, especially in the chorus.  I noticed this straight away, as did many others, to the point where Gfriend themselves even commented and said “well we’re still young so this is our only opportunity to rip SNSD off before we age past the material“.  However sounding alike and plagiarism aren’t the same thing.  Blues, jazz, reggae and country music all literally couldn’t even exist without “soundalikes”.  All music sounds pretty much the same – if it didn’t, you probably wouldn’t like it.  That’s because people process music relative to other music that they’re already heard.  Really innovative things happen in the pop sphere very rarely – most shit sounds like other shit, and you can get just about any song and find another one that sounds similar.  Things really do need to sound exactly the same to a large degree for there to be a case here, not just “gosh that seems similar”, but many k-pop fans can’t tell the difference between “similar” and “identical” because tone-deafness is an incredibly common thing.  It’s not k-pop fans’ fault if they have trouble discerning pitch accurately, but maybe they shouldn’t go around acting like they know stuff for sure that they don’t, lest they be made an example of by contemptuous snarky k-pop bloggers.

What, you’re saying that all disgusting k-pop album filler ballads sound the same?  Gee, someone stop the presses.  I’ve been saying that they all sound the fucking same for years.  K-pop’s terrible ballads are not plagiarism but just shitty music, mind you I’m happy to pretend that it’s all plagiarism if it gets a few of these awful songs banned off the face of the planet.

Speaking of liars, this accusation comes courtesy of a hilariously biased-in-tone article from Koreaboo, a trashy website who aren’t afraid of engaging in a bit of actual plagiarism of their own.  The logic would go that it takes one to know one, but the article hilariously suggests that Gfriend’s real roller skates are plagiarising Oh My Girl’s fake rollerskates.  I swear I’m not making this up, this is a real article that suggests not more than one girl group is ever allowed to wear roller skates, ever, without being legitimately accused of plagiarism.  If we’re going to go down this route, I think no girl groups should wear underwear because SNSD wore underwear once.  Seems fair.  Oh and did I mention that Oh My Girl’s rollerskates aren’t actually real rollerskates anyway?  Just pointing that out.

Already debunked by the clothes manufacturers themselves so no need to repeat it all here except to say that imagine a world where wearing clothing was copyrightable.  You wouldn’t be allowed to wear anything at all, because a while back someone else also wore it.  It scares me that netizens who comment on k-pop articles and think stuff like this is actually an issue may one day become important people in society making actual decisions that affect others.  Humanity is in a bad place.

Gfriend plagiarism accusation #5: something to do with Apink, fuck I dunno

Fuck, k-pop fans are dickheads.  Every k-pop girl logo ever has a heart in it or some bullshit.  Also, budding brides, don’t hold flowers while posing for photos, you’re plagiarising Apink!  Also remember that only Apink can wear white dresses!  Don’t wear black ones either, you’re probably plagiarising Rainbow!  Probably safest to just not get married. girls.

So an intro to an older k-pop song was great so Gfriend’s agency decided to do something very similar to it so they could also sound awesome?  Good!  They’re learning by others’ good examples.  That’s how music evolves into a more awesome thing over time, by people getting what was cool and mimicking it, slightly changing it as they go.  Not plagiarism, but evolution, which of course bothers netizens who are not very evolved creatures and thus jealous that biology has left them behind.

They’re copying f(x) album tracks too?  Thank fuck for that, f(x) are one of the only groups in k-pop who actually have some decent fucking album tracks.  Let’s support Gfriend’s copycat mission all the way!

This accusation comes direct from KPOPALYPSE and is therefore PURE UNADULTERATED TRUFAX.

It seems that Umji has completely plagiarised the image of one of the world’s greatest heavy metal singers, Bruce Dickinson of Iron Maiden.  Clearly this face style, long flowing locks and undeniable good looks are plagiarised.  Can you even tell who is who in these pictures?

It’s not just the physical appearance – the iconic dance moves are similar.  People wonder why Gfriend are so good at dance, it’s because they learned from watching Iron Maiden videos over and over in their dorms. 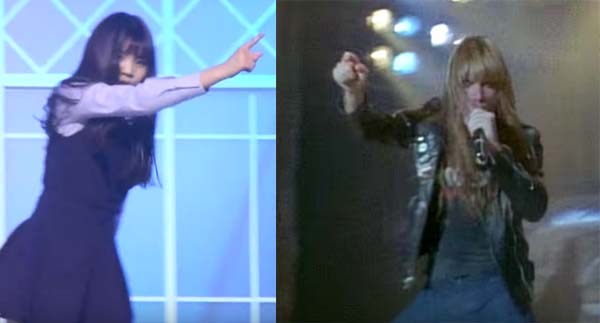 Who can deny the similarity?  Clearly, Iron Maiden should sue Gfriend’s agency.

To top it all off, both Umji and Bruce are well-versed in INCREDIBLY SKILLED AND CONVINCING TV LIPSYNCING.

Clearly Kpopalypse has identified the only plagiarism controversy in Gfriend that really matters.  You’re welcome!