It’s time for another Kpopalypse roundup!  Let’s check out some new stuff! 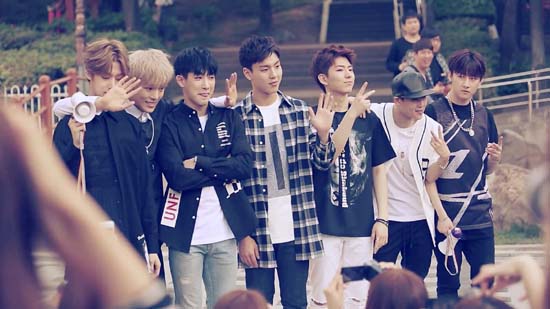 This song wouldn’t be too bad if it didn’t contain what is possibly the worst ever synthesised violin on a k-pop recording.

It’s great how k-pop agencies are now just saying “fuck it let’s make them dance in ankle-high water for their debut”, it’ll get the girls used to having to perform on slippery wet-weather stages and they might not have to go ass-over-tit like Gfriend.

Wow this is so awkward and cringey to watch, this must have been how my girlfriend felt when I showed her SNSD’s “Gee“.

Lots of colour in the video but not much in the song, which is the usual screechy mess that we get these days from Red Velvet, Twice, etc etc.

Sort of the male equivalent of the MelodyDay song above, less screechy, more shouty, just as uninteresting.

…and this one’s about the same.  Lots of bounce but no flavour, like chewing gum that loses its taste in about ten seconds.

Easily the best song by this group yet.  Not that that’s hard, their other songs were pretty terrible.

Starts off as some reasonable enough trip-hop but then becomes a mandatory listen when it kicks into high gear for the YG diss section at the end.

In an era when so much of k-pop sounds like Chinese restaurant music, it’s almost refreshing to hear a k-pop artist do a cover of a song that actually IS Chinese restaurant music.  If you’re going to do it you might as well go all the way.  The melody of this will probably bring on a sense of deja vu from the last time you waited for your beef and black bean.

Primary is such a skilled producer but he loves churning out crap like this instead of doing actual songs.  They could have at least stuck Gain in the video to give this thing some purpose but even that was too much for them.

This could have been okay but spends too much time in downtempo-land.

A pretty unexciting song, but I guess with this group, the music isn’t really the point.  However if the song doesn’t suck enough for you try this Rhodes-infected official remix.

Dull shoegazey crap that sounds like all those awful English groups from the early 90s that nobody listens to anymore.

Don Mills thinks his kidney is in his head, which explains a few things about this track.

These guys have sensibly figured out that nobody wants to watch a bunch of reggae dudes sitting around a hut in Jamaica smoking weed, so they just dubbed their song over some random k-pop girls dancing to completely different music.

If you’re going to play a guitar with Van Halen stripes on it I expect some shredding.  At least a whammy dive-bomb or something, not this Coldplay “let’s hammer one semi-distorted chord into a mush” business.

About as interesting as a cloudy day, too.

Hang on, I’ve heard this type of broken-up rap flow, synthesiser backing line and general arrangement before, and recently… yes that’s right, “Hustle” is a thiny-veiled and vastly inferior reworking of Jimin’s “Puss“, with about 90% of the balls sucked right out of it.  Puss indeed.

That’s all for this week – more new k-pop releases next week!