The latest web-based AI intelligence image-recognition program and shining example of the future of infotech is Microsoft’s CaptionBot, a program that will describe any image that you send to it.

CaptionBot is an astounding piece of software that can recognise many images of different things, but can it determine trufax from fiction in the world of K-pop?  Read on as Kpopalypse puts CaptionBot to the test! 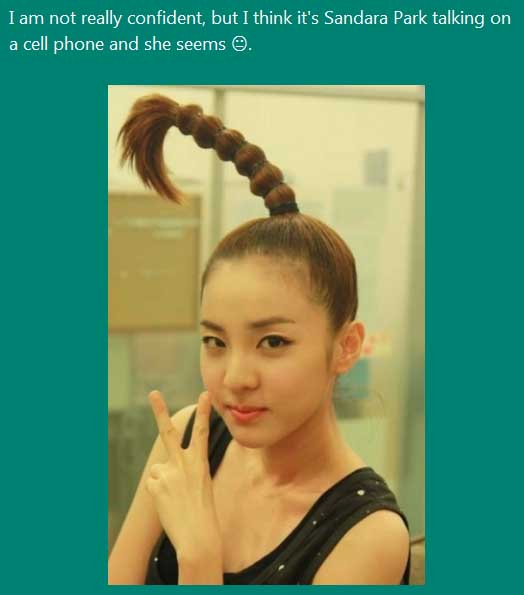 Being an AI, CaptionBot was naturally able to correctly identify this image of advanced AI program Dara+, and even sensed more technology than was present in the actual image.

As the other members of 2NE1 are not AIs they were not easily recognisable to CaptionBot, who mistook both CL and Minzy as SNSD’s Kim Taeyeon.

CaptionBot is fairly sure that Jiyeon is Jiyeon.  However, due to the strength of the cyclops beams, Jiyeon confused CaptionBot’s ability to identify objects that Jiyeon is holding.

CaptionBot was however successfully able to filter out and ignore random worthless netizen brain-farts when assessing images of Jiyeon. 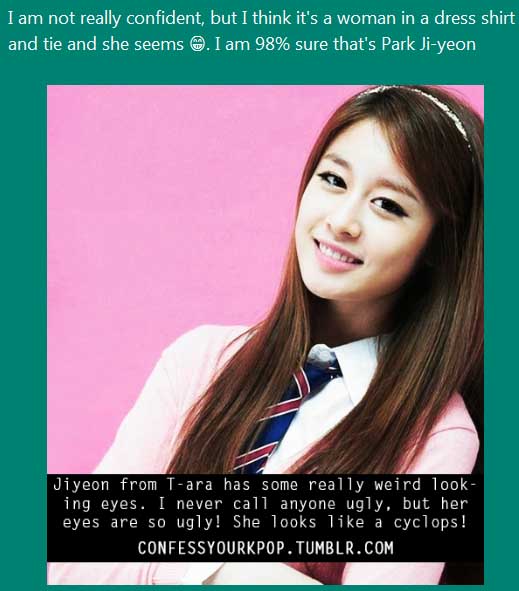 Irrelevant ex-T-ara members were not recognisable by name to CaptionBot, but the program was still able to detect traces of their low determination levels.

Even when smiling on the outside, CaptionBot knows that Hwayoung is lacking in determination on the inside.

CaptionBot knows that Hwayoung doesn’t have work foremost in her mind and can sense her inner laziness, as Hwayoung imagines what she’d rather be doing instead of working.  Perhaps MBK can utilise CaptionBot to determine low determination in the future, to prevent unfortunate mishap. 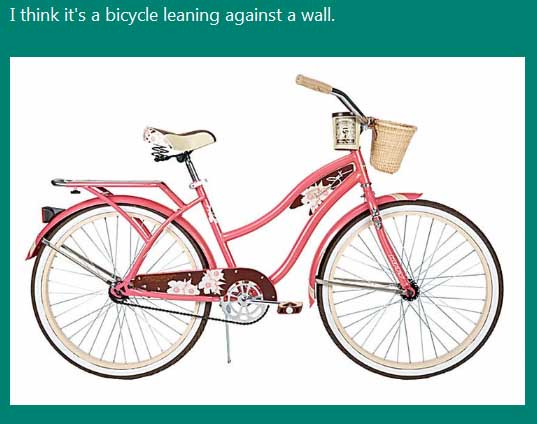 CaptionBot is able to correctly determine bicycles (the wall is obviously white).

However when bicycles are near Yoona, they becomes invisible due to the powerful protective aura of boredom that Yoona provides.

Maybe this aura can one day be used to prevent advanced AIs from accessing unauthorised data.  Any war against a future rogue AI would clearly be best conducted from bicycles, with Yoona. 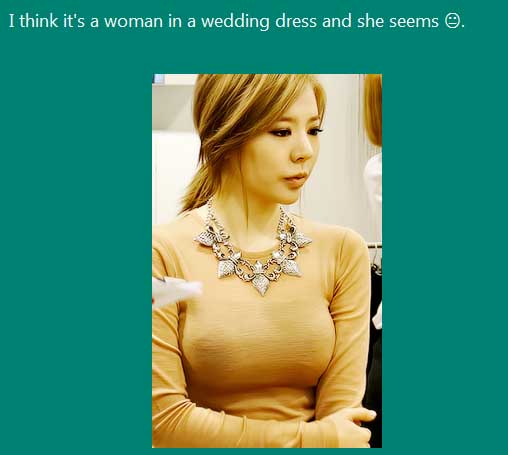 As for Sunny, CaptionBot believes that she will be getting married soon. Or maybe Captionbot just wants to marry Sunny itself. 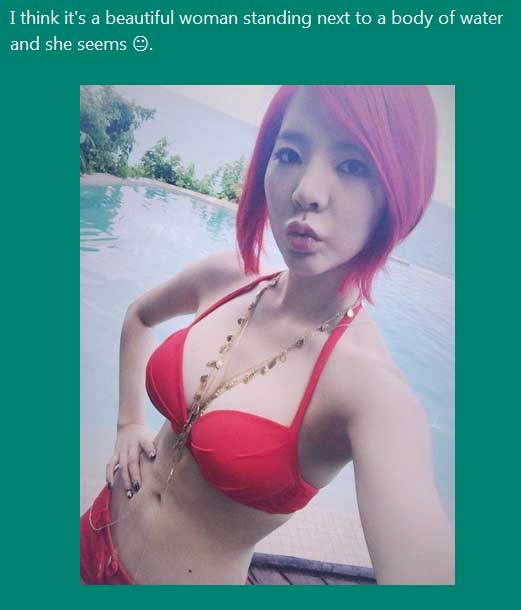 Captionbot clearly wants to get its hands on Sunny’s “toys”. 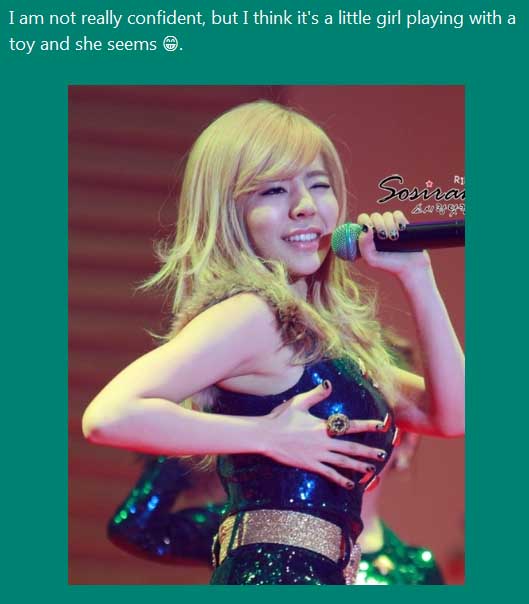 JAV star identified correctly.  The male person identified in the black shirt and tie is probably me, reflected in Maria Ozawa’s pupils.

CaptionBot knows JAV, it clearly watches a lot of it.  Nice surfboard, Hitomi!

Now that we’ve tested and confirmed CaptionBot’s abilities as 100% accurate, let’s put it to some real work!

Remember that lame controversy about Tzuyu waving some flag or some bullshit?  Turns out it wasn’t even her, it was a man laying on that bed.

My money’s on this transgender man here.

IU was just brushing her teeth, all along.  Eunhyuk just cares about good dental hygiene, and was visiting IU because her teeth were in poor health, just like Loen said.  Gosh, people can be so cynical. 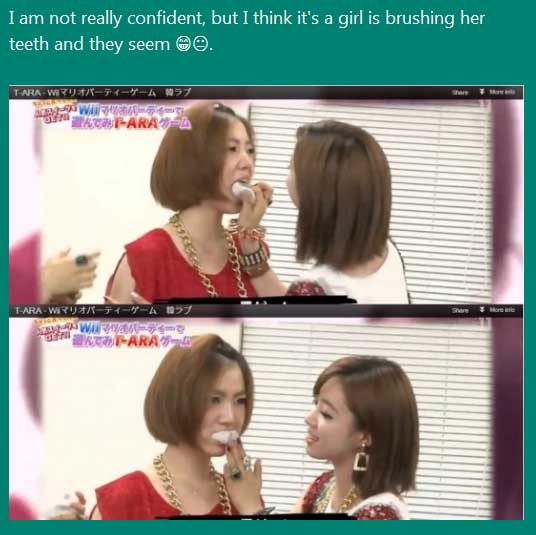 Eunjung is another person who cares about dental hygiene, and is clearly wiping the plaque of Hwayoung’s teeth here, because Hwayoung is clearly a grot and too lazy to clean her own teeth.  Biased people with fertile imaginations will read anything into anything, but CaptionBot is objective and has the trufax.  Notice how once again CaptionBot also detects the difference in determination levels.

CaptionBot has proven to be perfectly capable of recognising any image of Jiyeon, but doesn’t identify her in this case, therefore she wasn’t the girl in that notorious webcam. 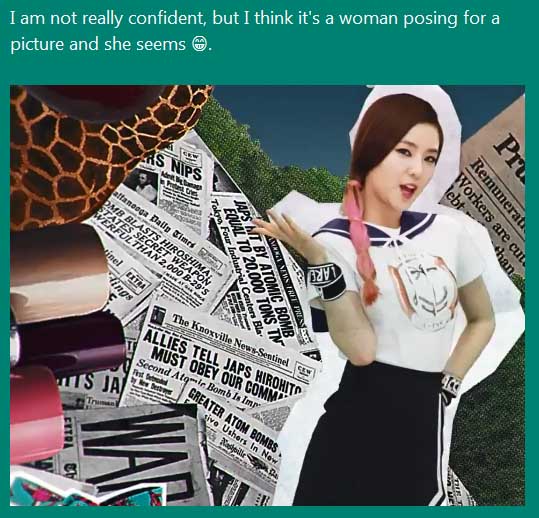 Just a woman posing for a picture who seems happy.  If you want to read more into it than what’s there, that’s your problem. 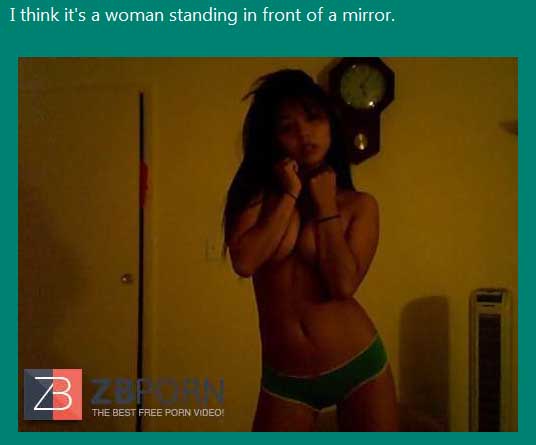 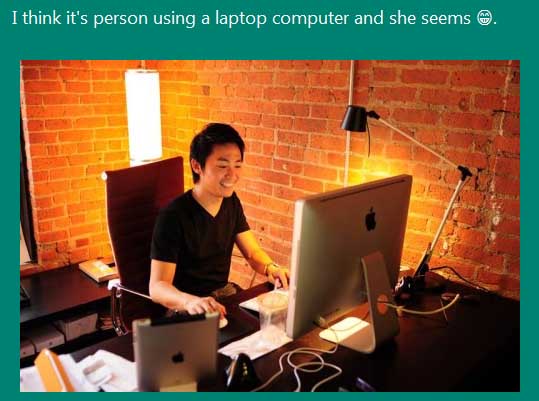 The Ailee controversy is exactly what we all thought – Johnny Noh is a female voyeur who likes to watch people standing in front of mirrors.

According to CaptionBot, Choiza doesn’t actually even exist.  That means Sulli is still available!  Form an orderly queue, no shoving!

You all saw pedophilia because you’re all disgusting closet pedophiles who are obsessed with pedophilia so you see it everywhere, but it’s just a birthday cake. 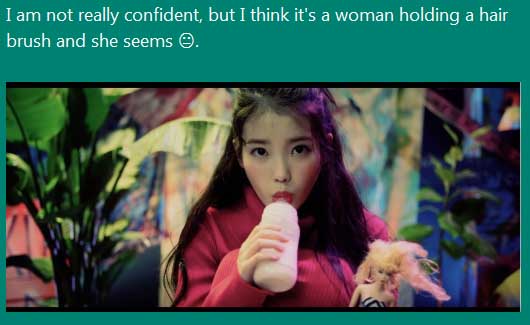 Can’t a girl hold a hair brush in peace anymore? 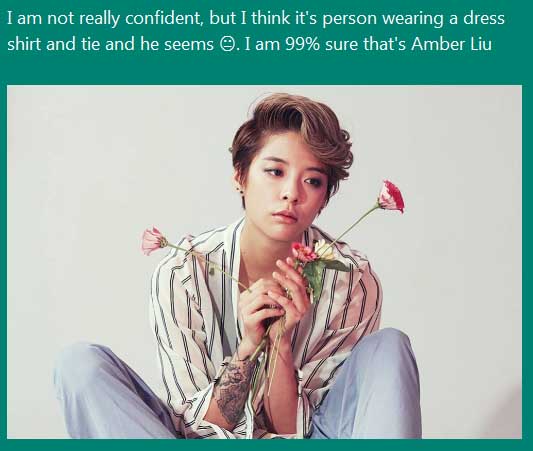 That’s all for Kpopalypse!  Hopefully you enjoyed this incredibly factual post and more posts will be on the way soon… and watch out for stealth cats!