It’s time for another Kpopalypse roundup!  Let’s take a look at this week’s new releases! 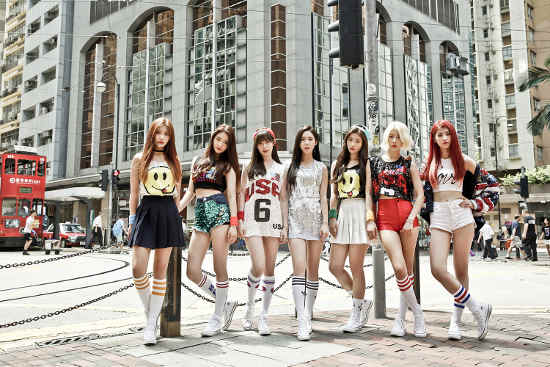 The Garry Glitter style drums are cool, pity about the fairly average song plopped on top of them.

On the other hand this song has completely shit rhythms and some of the worst makeup in k-pop history but then the chorus happens and it completely redeems everything with some of the weirdest and most melancholy harmony I’ve ever heard in a k-pop song.  A complete failure as pure pop as it won’t fly with most listeners, but great anyway.

Boys Republic – Get Down

Wow it’s a k-pop lite version of Necro’s “White Slavery Pt.2 (The Human Traffic King)“.  Well, I guess if The Human Centipede is fair game, so is this.

My Mamamoo bias keeps on changing.  It always seems to go to whoever has the darkest hair colour at any particular point in time.  For this video, it’s Solar, but they’ll ALL have to go with completely black hair before I can truly make up my mind.  I have to think about these things to distract myself from another one of their disgusting Sistar clone songs.  Oh and nice bait-and-switch with the Queen style harmonies at the start you fucking assholes.

You wouldn’t even know that this was supposedly a “rock band”, it sounds just like every other crap mid-paced k-pop/funk song.  Why do they even pretend to play their instruments, are they really still fooling anyone in 2016.

Hyelim looks tons better here in casual clothes just being chill than she does in any Wonder Girls video.  Astoundingly, stupendously better, to the point where it actually fits the song.  I call this “the Snowyeon Effect“.

Some weird John Zorn style instrumentation and a creepy video doesn’t actually make this a good song, but I guess at least it’s different and breaks all the pure pop stuff up a little, seeing as how there wasn’t any new hip-hop or whatever this week.

Does Stephen Marley actually respect Skull and Haha’s contribution to reggae, or does he just laugh while collecting the appearance fee and try not to look too embarrassed?  I guess only he knows the answer to that, but he at least does a good job of pretending that he’s into this.  Or maybe it’s the drugs.

The only difference between this guy and Jay Park is that Jay Park actually gets laid.

Orchestras in LA will play any old crap if you pay them enough to afford their methadone clinic visits.

That’s it for another Kpopalypse roundup – more next week!