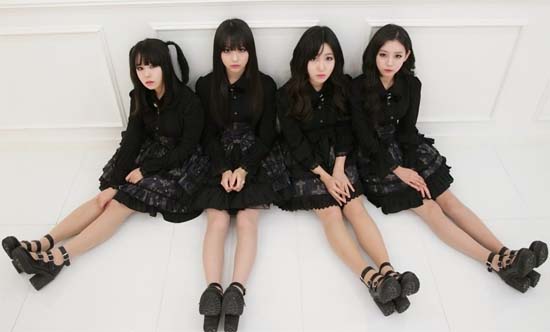 This week’s roundup nearly didn’t happen as I almost had to pull a sickie on the entire show due to rapidly losing my voice from a viral infection.  Fortunately high determination levels won the day.

T-ara’s Hyomin out-Hyunas Hyuna’s Hyuna effortlessly, which I expected, but what I didn’t expect is for this song to actually work.

Red Velvet – One Of These Nights

Red Velvet could have used Hyomin’s producer going over this track to see if he could have added something vaguely interesting to it because there sure is nothing here right now.

I definitely HAVE heard this song before, or one that sounds 99% identical, but where from, I have no idea.  I didn’t like it back then much either.

Jiyoung – I’m Just Not Into You

It’s better than this unexciting BoA-by-numbers, though.

Not great but better than all CL’s 57 “American debuts” so far.

“Disneyland reflects the real life.”  Unquestionably a phrase destined for the Kpopalypse Lexicon.

All the bounciness and gaudy strangeness of Orange Caramel but without the melody.

This Europop song is just the same four chords over and over but is certainly pleasant enough, just like the girls themselves.  Everyone looks so generically beautiful these days, don’t they?

Actually I played this a month ago but the full video just came out so I thought I might as well stick it here just to meet Kpopalypse blog’s minimum Sorn quota.

Obsession over vocals is a disgusting, worthless cancer on k-pop even when the performers CAN sing, but to see vocally-obsessed trashbags fawn over this obviously 90% computer-generated performance really brings home how little these self-appointed Internet vocal experts really know.

A new Ailee MV without Ailee actually in the MV is like socks for Kpopalypse’s birthday.  Curse OSTs and their abundance of stock footage for MV use.

I actually can’t whistle at all and it’s one of the multitude of things I was bullied about as a kid.  K.will please stop bullying me with this Bruno Mars bullshit song thank you.

That’s it for another Kpopalypse roundup – more next week!